Prime Minister David Cameron said on Thursday (2 June) he would take Britain into the European Union under the “special status” it now enjoys if it was not already a member, even if he admitted the EU “sometimes drives me crazy”.

Cameron pressed his campaign to remain in the bloc in a live television performance yesterday.

Fielding questions from a sometimes hostile audience on subjects ranging from immigration to security, Cameron said he often became frustrated with the 28-member bloc. But he stressed that a vote to exit in a June 23 referendum would be a “self-inflicted wound” for Britain’s economy.

With the vote only three weeks away, both sides are stepping up their campaigns to try to win over undecided voters and break the deadlock in opinion polls which suggest that Britons are almost equally split over which way to vote.

“I would never want us to join the euro, but if we were offered British terms, what we have now … the special status we have now, I would join,” Cameron told Sky News television.

“Are there things about Europe that frustrate you? Yes, but I am a prime minister who sits round the table with 27 other heads of government and state and sometimes this organisation drives me crazy. But do I sit there and think Britain would be better off if we left? … Absolutely not.”

Cameron has often expressed frustration with the European Union and Brussels politics in particular. During an EU summit in 2013, he famously lost his temper when other leaders tried cutting Britain’s rebate on the EU budget, saying: “In this town you have to be ready for an ambush at any minute”.

The British Prime Minister vented frustration with Brussels and the institutions in his post-summit press briefing describing how he “defeated” an eleventh-hour attempt to unpick the British rebate.

Cameron, who is leading the “In” campaign, was keen to stick to what he called the risks to the economy if Britain were to vote to leave, but was pressed on high levels of migration and its impact on public services such as health provision.

The Leave campaign, led by two one-time allies of the prime minister, says Britain cannot control migration while being a member of the European Union, which holds up free movement of people as one of its founding principles.

“And yes we do need to do things to control migration like restricting in-work welfare (payments) but it would be madness to try to do that by trashing our economy and pulling out of the single market,” Cameron said.

“Leaving the single market would be an act of economic self-harm for Britain and we absolutely shouldn’t do it.”

He also sought to allay fears among some in the audience that more migrants could enter Britain if Turkey were to join the bloc, saying “at this rate they’ll join in the year 3000”.

“There is no prospect of Turkey joining the EU in decades. They applied in 1987, they have to complete 35 chapters, one has been completed so far,” he said. “Turkey’s not going to join the EU anytime soon, every country, every parliament has a veto.” 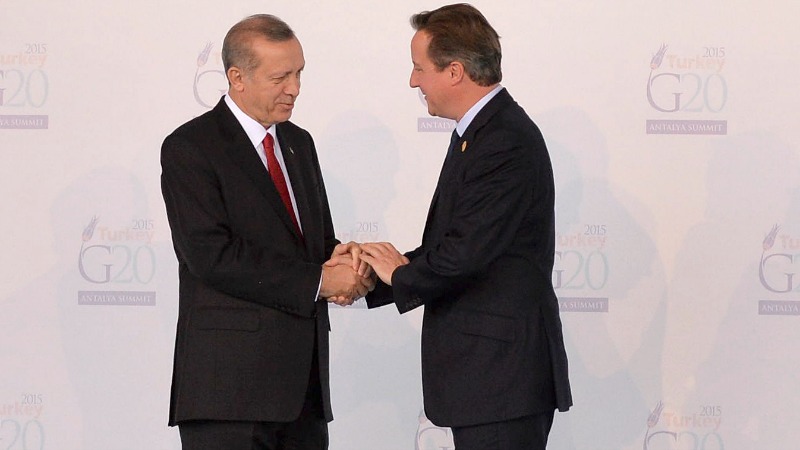 Chief ‘In’ campaigner Prime Minister David Cameron clashed with members of his own party on
Sunday (22 May) over the impending referendum on Britain’s European Union membership, dismissing claims that he would be powerless to stop Turkey joining the EU.