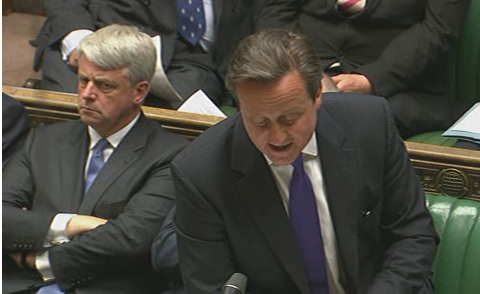 Prime Minister David Cameron defends his failure to prevent Juncker's nomination. Andrew Lansley, tipped to be the UK's next commissioner, sits on his left. [House of Commons]

Labour leader Ed Miliband branded his efforts to block Juncker an “utter humiliation” that risked pushing Britain towards exiting the EU. The criticism comes after similar speculation in the British press over the weekend.

Cameron told an uproarious House of Commons that he was unable to prevent Juncker’s appointment at an EU summit last week. He blamed the opposition Labour Party for signing away a veto in the Nice Treaty and for backing the Lisbon Treaty when it was in government.

The British Prime Minister said he wanted the UK to reform the EU and remain in it. He added that Britain would be “the voice” of all those “crying out for change” in the recent European elections, which saw gains for Eurosceptic parties.

“We will fight with all we have to reform the EU,” he said.

But Miliband said, “The truth is the prime minister returned to Britain having failed, not some small failure, but an appalling failure. His combination of threats, insults and disengagement turned out how to be a masterclass in how to alienate your allies.

“The problem for the anti-Juncker cause was it had a toxic supporter; him. The rest of Europe lost patience with his act […] the strategy of threatening exit from the EU was put to the test and failed.”

Cameron had said that Juncker’s appointment could lead to Britain’s EU exit after a referendum penciled in for 2017.

The prime minister said that he forced the vote by EU leaders on Juncker, which he lost by 26 votes to two, because he wanted Britain’s opposition to him “firmly on the record.” Only Hungary stood with the UK in the vote.

“It doesn’t matter how many countries were ranged against me, I thought he was the wrong candidate,” Cameron said.

“I firmly believe it should be for the EU Council to propose the President of the European Commission […] it should not be for the European Parliament to try and dictate that choice – this was a point of principle on which I was not prepared to budge.”

“This was a bad day for Europe because the position of the Council risks undermining national governments,” he added.

Working with the wrong person

Cameron was drowned out by catcalls from MPs when he said he would work with Juncker, who he said was the wrong person to head the EU executive. He has already telephoned the former Luxembourg PM to congratulate him.

Cameron, who said he disagreed with the Spitzenkandidaten process and that the idea there “was this great big mandate” for Juncker was false, pointed out that EU leaders had offered some concessions in the conclusions to the Council.

Their final statement said London’s concerns about the future direction of the EU will need to be addressed and that the principle of an ever closer union in the treaties allowed for different paths of integration for different countries. They also agreed to review the process for appointing the president of the European Commission once the new executive was in place.

“While the EU has taken a big step backwards in the nomination of the Commission president, we did secure some small steps forward,” Cameron said.

Former Liberal Democrat leaders Menzies Campbell and Charles Kennedy attended the hearing but appeared to be the only Lib Dems present. When asked about the absence of his coalition partners, including pro-European Deputy Prime Minister Nick Clegg, Cameron said it was up to the Lib Dems to explain it.

He also rejected Kennedy’s argument that he could have better influenced the appointment process if the Conservatives had remained within the European People’s Party, instead of forming its own parliamentary group, the European Conservatives and Reformists, in 2009.

Juncker must be approved by the European Parliament before becoming Commission president.

BBC’s recording of the debate in the UK Parliament’s house of commons.

UK Prime Minister David Cameron waged a campaign to block the former Luxembourg Prime Minister and EU veteran Jean-Claude Juncker from becoming the next President of the European Commission.

But Cameron refuses this because Juncker's candidacy did not appear on the ballot papers at the May election.

He insisted that EU heads of states and government took a vote on the matter during an EU summit on 27 June, even though he does not have a blocking minority.