Cameron Brexit proposals get mixed reception in Berlin and Budapest 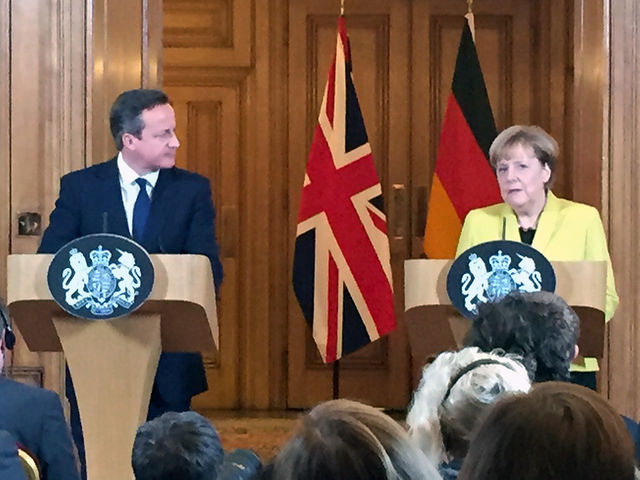 Cameron is seeking backing for his demands for EU reforms, which he is battling to secure before Britain’s referendum on membership in the 28-nation bloc by the end of 2017.

Speaking in southern Germany, where he held talks with the Christian Social Union – sister party of Merkel’s CDU – Cameron said he was “even more confident after the discussions here that these (reforms) are possible and not just good for Britain but actually good for Europe”.

“Not simply because other European countries will benefit by Britain continuing to be a member of Europe, but I think it’s important that (the EU) shows it has the flexibility of a network and can address concerns of an individual member rather than the rigidity of a bloc,” he said.

Cameron wants the EU to cut bureaucracy and shift more powers from Brussels to member states. He is also seeking guarantees that Britain will be protected from closer EU political integration and from economic decisions made by the 19 EU members that use the euro currency.

Those demands have so far proven relatively uncontroversial.

>>Read: British government set to argue against itself on Brexit vote

However, a key sticking point for several EU members is Cameron’s aim to restrict benefits for EU migrants for their first four years in Britain.

Critics of the plan say the measure would harm the EU’s central tenets of non-discrimination between EU citizens and freedom of movement between member states.

While Merkel is seen as generally supportive of Britain’s position, she has said that “the fundamental achievements of European integration” are not up for debate, in what is a clear reference to this proposal.

However Merkel later Thursday acknowledged that it was “not the intention of the law of free movement” to immediately allow EU migrants to claim benefits from host member states.

She said her own Labour Minister, Social Democrat Andrea Nahles, had also proposed new restrictions “which to a certain extent mesh with what Britain is seeking”.

The CSU has more eurosceptic leanings than its bigger sister party, the CDU, and has signalled support for Cameron’s bid to limit benefits for EU migrants.

In an article for Germany’s Bild newspaper on Thursday, Cameron also reiterated his belief that the changes he is seeking “will benefit the EU too, and Germany can help deliver them.”

“We want to stop people taking out from a welfare system without contributing to it first,” Cameron wrote.

“Like Germany, Britain believes in the principle of free movement of workers. But that should not mean the current freedom to claim all benefits from day one and that’s why I’ve proposed restricting this for the first four years.”

Later Thursday Cameron travelled to Hungary, where he won broad backing from Hungarian counterpart Viktor Orban for his EU reform proposals – but not for his idea to freeze welfare benefits for EU migrants in Britain.

Speaking at a joint press conference with Cameron in Budapest, Orban said Hungary “fully supported” three out of four of Cameron’s proposals but not his plan to restrict benefits for EU migrants for their first four years in Britain.

Cameron said the plans “remain on the table” but that he is “open to alternative solutions” before a meeting of EU leaders next month in Brussels. “Goodwill and creative thinking can find solutions,” he said.

Orban said he was “optimistic” however that agreement on Cameron’s proposals among the ‘Visegrad 4’ bloc of central European EU members – including Poland, Slovakia, Czech Republic – could be reached, even on the “more difficult” including welfare system reform idea.

A common position by the Visegrad 4 bloc was necessary as other countries like much larger Poland were more affected by Cameron’s plan on benefits. Some 55,000 Hungarian-born citizens are working in Britain according to Orban, although unofficial estimates put the figure at several hundred thousand.  The word “migrants” in Cameron’s proposals has also been a sticking point for Orban who has fought a year-long battle to keep migrants from entering Hungary including building border fences.

Cameron is keen to avoid a so-called “Brexit”, but faces a large eurosceptic contingent within his Conservative party and growing public discontent over Britain’s relationship with Brussels.

Highlighting divisions over the EU, Cameron on Tuesday said his ministers would be allowed to campaign for or against Britain’s EU membership ahead of the referendum.