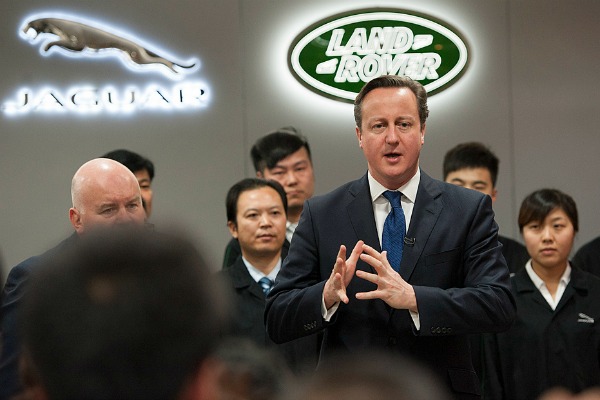 British Prime Minister David Cameron arrived in China saying he would advocate a multi-billion-dollar free trade deal between Beijing and the European Union, stoking tensions with the EU executive which condemned the move as premature.

On a three-day visit with around 100 business people, the largest-ever British mission of its kind, Cameron said Britain was the most open Western country to Chinese investment and was well-placed to take advantage of China's market liberalisation.

"China's transformation is one of the defining facts of our lifetime […] I see China's rise as an opportunity, not just for the people of this country but for Britain and the world," Cameron told reporters after meeting Premier Li Keqiang at the Great Hall of the People in Beijing.

He cast Britain as far more progressive on trade than other unnamed EU member states in remarks that stirred a growing spat with Brussels over the issue.

"Some in Europe and elsewhere see the world changing and want to shut China off behind a bamboo curtain of trade barriers," said Cameron. "Britain wants to tear those trade barriers down."

His line irritated the European Commission, which is privately understood to oppose such a move on the grounds that it risks flooding the 28-nation bloc with cheap Chinese imports.

"We believe that it is premature at this stage to discuss a free trade agreement with China," Alexandre Polack, a spokesman for the EU executive, told reporters.

He said the EU and China were already discussing a possible investment agreement and should stick to that for now.

At home, Cameron's initiative is likely to be seized upon by opponents as he has placed a question mark over Britain's EU membership by promising a referendum on leaving the bloc if re-elected in 2015. That sits awkwardly with his drive to help broker a deal for a club his country may be about to leave.

"I've said to Premier Li that I will champion an EU-China trade deal with as much determination as I'm championing the EU-US trade deal," Cameron said.

Li said both sides had agreed to fight protectionism and push for trade and investment liberalisation. China, he said, welcomed Britain's open attitude to Chinese investment, especially in the nuclear power sector.

Li said there had been a "breakthrough" between companies on both sides on high-speed rail, but gave no details.

His comments fuelled speculation in Britain that Chinese firms might play a role in plans for a high-speed rail link, dubbed HS2, between London and the north of England.

Cameron's office said he was the first European leader to champion such a free trade deal, saying he had discussed the issue with other EU member states. The deal would address services liberalisation and intellectual property rights.

He announced less stringent rules for Chinese banks operating in London, in a push to make the British capital the main offshore hub for trading in China's currency and bonds.

Campaigners have often accused Cameron of putting trade before human rights. On this trip, activists want him to raise what they describe as rights abuses in Tibet.

A senior source in his office said before the trip that Britain had turned the page on a rift with China over Tibet, and that Cameron had no plans to meet the Dalai Lama, Tibet's exiled spiritual leader. Their encounter last year angered Beijing.

Before meeting Chinese leaders, Cameron was non-committal about raising Tibet, but said no subject was "off limits".

As permanent members of the UN Security Council, Cameron said the two countries would also discuss Iran and North Korea.

Cameron visited a training academy for Jaguar Land Rover sales staff on Monday to mark its opening as the carmaker unveiled a deal worth 4.5 billion pounds (€5.44bn) to provide 100,000 cars to the National Sales Company in China.

The delegation includes Andrew Witty, the chief executive of GlaxoSmithKline. The company was drawn into a bribery case this year which resulted in police detaining four Chinese GSK executives. Peter Humphrey, a Briton running a risk advisory group, was also detained and is still being held.

China and the European Union announced on 21 November 2013 that they will begin talks on a landmark treaty aimed at boosting investment that lags behind burgeoning trade and at tackling thorny market access issues.

Europe is China's most important trading partner and for the EU, China is second only to the United States. But the bilateral relationship has been weighed down by a series of trade rows ranging from steel and wine to solar panels.

However, EU imports from China last year decreased for the first time since the financial crisis, falling 0.9%.

EU officials say the planned investment pact is a test of China's willingness to compromise and play by rules set down by the World Trade Organization that ban subsidising of companies to undercut foreign competitors.