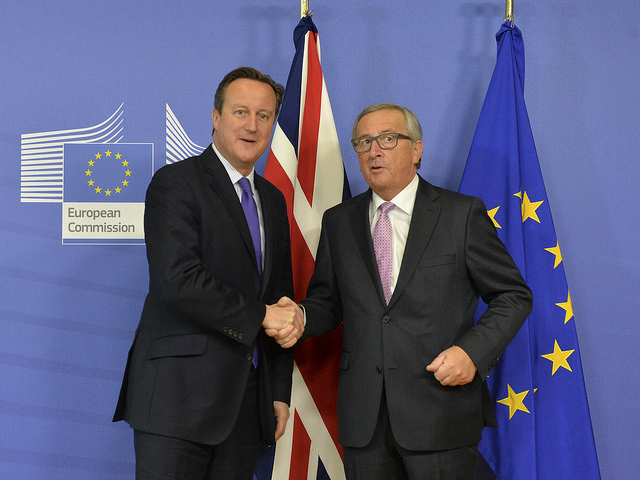 Will they shake on a deal before the Brexit referendum? [Georgina Coupe/Number 10/Flickr]

British Prime Minister David Cameron said he hoped to make good progress with reforms of the European Union when leaders from the bloc meet next month, but he gave no fresh sign of when he plans to hold Britain’s EU membership referendum.

“Am I in a hurry? Well, I want to get on with it,” Cameron said after giving a speech on Tuesday (10 November) on his plans to re-shape Britain’s ties with the EU before the in-out vote.

“Since the election [in May], I’ve been patiently meeting with European leaders across the continent. But as well as patient, and as well as wanting to get on with it, I will be persistent.

“I hope we can make really good progress in December and I’ve done everything possible to make that happen. We don’t have to hold our referendum until the end of 2017, but I’m keen to secure these changes to get on with it, and I’ve been working very hard to do that.”

Cameron, who today also wrote to European Council President Donald Tusk, has said he will hold the referendum before the end of 2017.

He said on Tuesday he was confident of achieving four key objectives in renegotiating Britain’s EU relationship but warned the UK would have to “think again” about membership if they were not met.

Cameron said it was the UK’s “only chance to get this right” ahead of the in-or-out referendum.

Speaking at Chatham House, the Royal Institute of International Affairs think tank, he said EU members that retained their own currencies should be treated on the same footing as eurozone members.

Cameron said if countries outside the single currency were “pushed aside and overruled, then it would no longer be a club for us”.

The demands focused on three other key areas — greater competitiveness, an exclusion for Britain from “ever closer union” and curbs on some benefits for EU migrants.

Cameron said he wanted greater controls on the freedom of movement in the 28-country bloc, and said the EU must address a “lack of democratic accountability”.

“I have every confidence that we will achieve an agreement that works for Britain and works for its EU partners,” he said.

“I have no doubt that with patience, with goodwill, with ingenuity, it can be done. And that in doing so we can make Britain and the whole of Europe safer and more prosperous for generations to come.”

(2/3) The renegotiation is not mission impossible. With patience and goodwill, a deal can be done.

Here are some of the highlights of Cameron’s speech and a subsequent question-and-answer session with reporters:

“We need to bring together all the different proposals, promises and agreements — on the single market, on trade, on cutting regulation — bring it all together into one clear commitment that writes competitiveness into the DNA of the whole European Union.”

“I can tell you today that as part of our renegotiation, I’m asking European leaders for a clear, legally binding and irreversible agreement to end Britain’s obligation to work for an ever closer union.”

“We’re not suggesting a veto for every single national parliament. We acknowledge that in a Europe of 28 (countries), that would mean gridlock. But we want to see a new arrangement where groups of national parliaments come together and reject European laws which are not in their national interest.”

“We gain from the union but we bring a lot to it. And we believe very strongly that if a major member state has major concerns, concerns which it has been voicing in a measured and constructive fashion over a number of years, then it is entitled to expect those concerns to be addressed.

“And at the heart of this negotiation is actually a very simple question: is the European Union flexible enough to accommodate the concerns of its very different member states. The answer to that question must be yes if the EU is to survive and prosper in the future.”

“If we vote to leave, then we will leave. There will not be another renegotiation and another referendum. So I say to my European counterparts with whom I am negotiating, this is our only chance to get this right – for Britain and for the whole European Union.”

“I hope we can make really good progress in December and I’ve done everything possible to make that happen. We don’t have to hold our referendum until the end of 2017, but I’m keen to secure these changes to get on with it, and I’ve been working very hard to do that.”

“Today as we confront fresh threats and dangers to our country, I am in no doubt that for Britain, the European question is not just about economic security but national security too.”

After #Cameron ‘s speech, we have our own mini- #Brexit snap poll. What should rest of EU do? #EUreform #EUref

#UKIP Leader @Nigel_Farage responds to the PM’s speech on the EU https://t.co/arEtpgXQ87 pic.twitter.com/8oJW9OhDzl

"We see a number of elements that seem to be feasible like finding ways to increase the role of national parliaments, some issues which are difficult like the relation between euro ins and outs, and some things which are highly problematic as they touch upon fundamental freedoms of our internal market."