By Kylie MacLellan and Paul Sandle | EURACTIV.com with Reuters 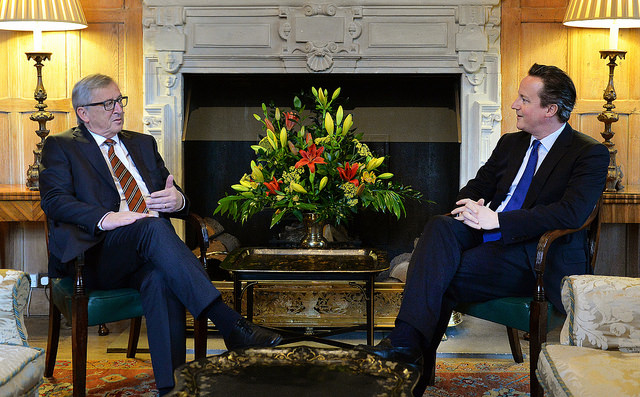 British Prime Minister David Cameron told the president of the European Commission that the country needed a new deal on Europe, before he presses his case for reforms to the bloc with other national leaders this week.

Talks between Cameron and EC President Jean-Claude Juncker over dinner on Monday focused on reforming the European Union and renegotiating the UK’s ties with Brussels, a government spokeswoman said.

“The prime minister underlined that the British people are not happy with the status quo and believe that the EU needs to change in order to better address their concerns,” she said.

Juncker reiterated he wanted to find a “fair deal for the UK and would seek to help”, she said, and they agreed more discussions would be needed to find a way forward.

Cameron promised before the British national election earlier this month he would renegotiate Britain’s role in Europe, and hold a referendum on the country’s continuing membership of the bloc by the end of 2017.

>>Read: What can Brussels do to avoid Brexit?

He launched his reform drive at a summit of EU and ex-Soviet states in Latvia last week, saying he was confident of winning concessions although it would not be easy.

Cameron has said changes to rules on welfare benefits were an absolute requirement in any renegotiation. He wants to force EU migrants to wait four years before accessing a range of welfare benefits in Britain, and to win the power to deport out of work EU jobseekers after six months.

Cameron will embark on a tour of five European capitals later this week to hold talks with key EU leaders over his reform plans.

The British leader will travel first to Denmark for a working breakfast with Prime Minister Helle Thorning-Schmidt on Thursday before heading to the Netherlands for talks with Prime Minister Mark Rutte. He will have dinner with French President Francois Hollande at the Elysee palace in Paris.

Cameron hopes to speak with all 27 EU leaders individually before a European Council meeting at the end of June where he is expected to set out his reform plans in more detail.

Earlier on Monday the government said most citizens of other European Union countries living in Britain will not get to vote in the referendum.

Cameron’s office said only those eligible to vote in British national elections, plus members of the upper house of parliament and Commonwealth citizens in Gibraltar, will get a say in the EU referendum.

That means British, Irish, Maltese, Cypriot and other Commonwealth citizens aged over 18 and resident in the UK, as well as UK nationals who have lived overseas for less than 15 years will be able to vote, but no other EU nationals.

“This is a big decision for our country, one that is about the future of the United Kingdom. That’s why we think it’s important that it is British, Irish and Commonwealth citizens that are the ones who get to decide,” a source in Cameron’s office said.

Citizens of other EU nations living in Britain are allowed to vote in local council and European elections.

The government will introduce its EU referendum legislation to parliament on Thursday as Cameron, whose Conservatives were elected with a surprise majority earlier this month, embarks on his diplomatic charm offensive across Europe.

>>Read: Brexit battle will be won, or lost, on the economy

As they dined on spring salad, pork belly and lime bavarois at the prime minister’s country residence Chequers, the leaders also discussed the Greek economic situation, and Ukraine, including the extension of sanctions against Russia later this year, the spokeswoman said.

Earlier on Monday, Cameron also talked about Ukraine in a telephone call with President Putin, the government said.

The prime minister said the priority now must be to deliver full implementation of the Minsk agreement that attempts to resolve the conflict.

Putin and Cameron also discussed the civil war in Syria, the spokeswoman said, and agreed their national security advisers should meet to restart talks, although the British leader reiterated that President Assad could not be part of the solution in Syria.

0 responses to “Cameron tells Juncker that Europe must change”