David Cameron and Nick Clegg in Paris. [UK in France/Flickr]

“I didn’t meet a single voter who voted for Brexit who wanted to see British exporters being damaged and the City of London being cut off from the single market,” the 49-year-old former Liberal Democrat leader said in an interview.

“I think that Theresa May and her government are making a huge mistake.”

In a speech on Sunday (2 October), the prime minister said she would begin Brexit negotiations by the end of March and would prioritise controlling immigration.

Experts say that to curb immigration — one of the key issues during the June 23 referendum — Britain may have to leave the single market, which allows free movement of people.

But opponents including business leaders have called for a more gradual exit that would retain access to the single market.

And on Tuesday, the pound dropped to a 31-year-low against the dollar as the markets began to price in a higher likelihood of a “hard” Brexit.

Clegg, his party’s spokesman on Brexit, said it was becoming clear that the government was taking a “fairly aggressive and confrontational approach” and he was “very perplexed” by the strategy.

Seen as one of Britain’s most pro-European politicians, Clegg speaks fluent Dutch and Spanish, has a Spanish wife and spent an early part of his career as a member of the European Parliament.

After a dramatic rise to power, dubbed “Cleggmania” during the 2010 election, he became deputy prime minister to David Cameron in an uneasy Conservative-Liberal Democrat coalition.

Clegg said he tried to dissuade Cameron from his decision to hold a referendum on EU membership. 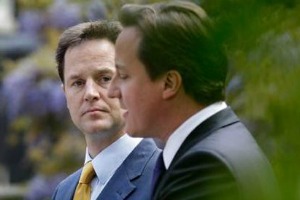 Prime Minister David Cameron's promise to reform Britain's relations with the European Union is an ill-fated attempt to unite his party that could lead to the "economic suicide" of withdrawal from the bloc, his deputy will say today (8 October).

“I told him on many occasions that I thought it was very foolish to hold a referendum in effect to settle an internal party dispute,” he said, suggesting Cameron was under pressure from the rise of the eurosceptic UK Independence Party.

Cameron campaigned for Britain to remain in the EU and “was convinced he was going to win”, said Clegg.

In the end, Britons voted by 52% to 48% to leave the EU, sending shockwaves through the union and British politics, which  eventually claimed the scalp of Cameron himself.

Clegg described May, who replaced Cameron, as a technocrat who lacked the imagination and vision necessary for her job.

“She is very diligent, she is very hard-working, and she immerses herself in detail. She is quite sort of technocratic, she is quite tough, she can be quite stubborn,” he said.

While Clegg said such characteristics were good qualities for a politician in government, he was not entirely positive about May’s style of politics.

“I never really saw very much imagination, or flexibility, or instinct, or vision, which I think is what you need in a prime minister,” he told AFP.

Clegg’s experience of the unusual alliance between his centre-left party and the centre-right Conservatives — in a government in which May served as interior minister — are outlined in his memoirs, Politics: Between the Extremes.

They narrate his years in government and the historic setback in last year’s general election, when the Liberal Democrats saw their number of MPs fall from 57 to just 8.

Clegg stepped down as leader following the electoral rout but held on to his seat in parliament.

According to his account, the Liberal Democrats helped put a brake on austerity and Cameron’s Conservatives showed “sheer brazen ruthlessness” in stealing his party’s policy ideas such as taxing plastic bags.

Clegg said he was motivated to write his memoirs to address the shift towards turbulent and volatile politics in Britain and abroad.

“Not just in the United Kingdom, but across Europe and the United States — look at the presidential election. There’s a sort of move towards the populist extremes of right to left.”

His story is also a personal one, reflecting on “Cleggmania” which saw his rise to power in 2010 before the dramatic fall five years later.

“It’s a distant memory. A distant and fleeting memory,” he said, laughing.