Commission Secretary General Catherine Day will retire on 1 September and be replaced by Alexander Italianer, the chief of the executive’s competition law department, in a reshuffle of the executive’s senior management announced today (24 June). Italianer is the former Director-General for Competition.

Faull, who is British, will take charge of the new taskforce and will report directly to Commission President Jean-Claude Juncker on “strategic issues related to the UK referendum”.

As Commissioner Michel Barnier’s lead official in the Barroso Commission, Faull was involved in the wave of financial services regulation after the crisis. This brought him into close contact with the City of London, the EU’s leading financial hub.

One of Faull’s main responsibilities will be the analysis and response to the United Kingdom’s demands for EU reforms.

The civil servant, 59, who joined the Commission in 1978, will work closely with Commission First Vice-President Frans Timmermans, the executive’s man in charge of “Better Regulation”. More effective and less burdensome EU regulation is one of a series of changes, the UK has lobbied for.

While UK Prime Minister David Cameron has not given full details of his aims, he is looking to restrict welfare entitlements, have greater powers for national Parliaments and an opt-out for Britain from the principle of “ever closer union”.

Cameron promised the in/out referendum by 2017, if he won Britain’s general election in May. He has said he would back the UK staying in a reformed EU.

On Thursday, he is expected to speak to other EU leaders at the European Council in Brussels about his demands. Today, he is meeting German Chancellor Angela Merkel in Berlin for talks “piggybacking” on a state visit by the Queen.

Faull was still considering the structure of the new team, Kristalina Georgieva, Commission Vice-President for Budget and Human Resources, said. He will identify bureaucrats with the skills and expertise he needed and officials would then join the taskforce on a short term assignment.

The taskforce was “budget neutral” as a result, Georgieva added, after stressing how important the UK’s continued EU membership was. Juncker identified keeping the UK in the EU as one of his priorities after taking charge last year.

Faull will be replaced as head of Financial Stability, Financial Services and Capital Markets Union by his deputy, Olivier Guersent, who is French. Guersent will report to the UK’s Commissioner Jonathan Hill. Faull previously served under Barnier, France’s Commissioner. 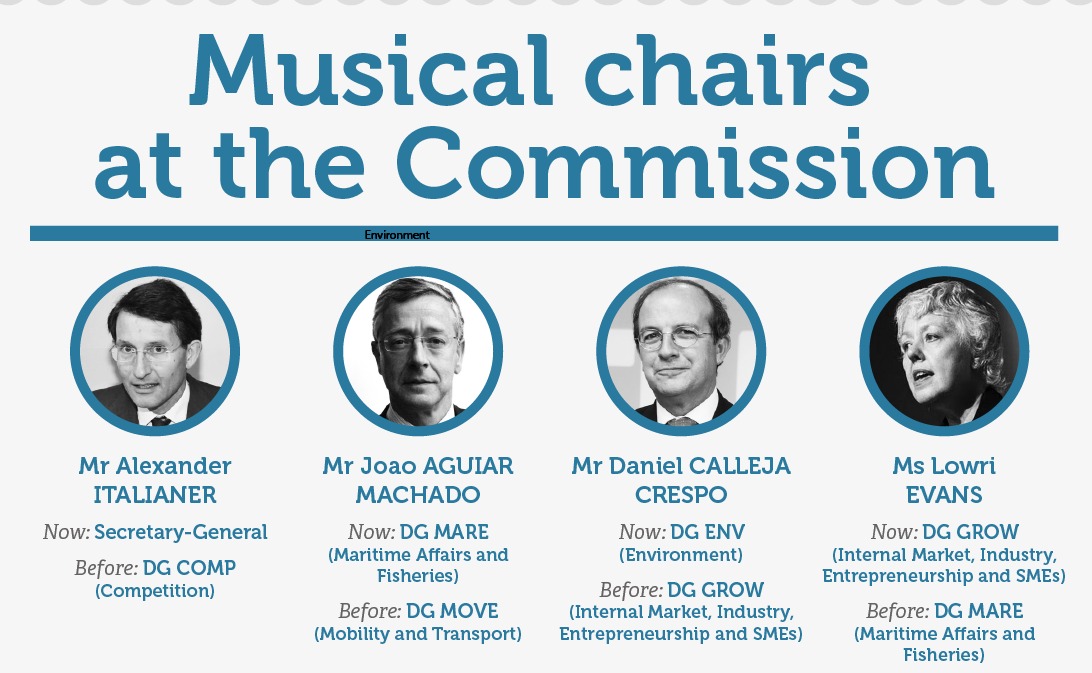 The head of the Commission’s environment department Karl Falkenberg will be moved on. He is joining the Commission’s in-house think-tank (EPSC, European Policy Strategy Centre, ex-BEPA) as an Hors Classe Adviser as of 1 September.

Falkenberg, an architect of the now withdrawn Circular Economy package, will be replaced by Daniel Calleja Crespo, the head of DG Grow (Directorate-General for Internal Market, Industry, Entrepreneurship and SMEs)

Shifting the boss of the Commission’s enterprise and industry department to environment could raise fears about the influence of business over environmental policy. But Falkenberg came from trade, and proved himself as a fighter for the environment, some campaigners said.

The withdrawal of the Circular Economy package of waste, recycling and incineration laws under the “Better Regulation” strategy was requested by lobby organisation BusinessEurope.

The executive has repeatedly stressed its commitment to the environment, and that the package will be replaced with a more ambitious proposal. But the new proposal is being worked on by both DG Environment and DG Grow.

Juncker’s decision to combine the Environment, Maritime Affairs and Fisheries portfolios under one Commissioner is also seen as a downgrading of status by green campaigners.

Under the previous administration, Environment had its own Commissioner, Janez Poto?nik. The original circular economy package was put forward under his and Falkenberg’s leadership.

Deputy Director General of DG Connect Roberto Viola, will take over from his boss Robert Madelin, who will become senior adviser for innovation to the EPSC.

Commissioners proposed three names of senior managers they would like to see as their director-general, the Commission said. Juncker consulted his vice-presidents before finalising the decision on a process began in March.

There were not enough women in the senior level of the Commission, Juncker said.

“Today’s re-shuffle could not address this issue because it was, by its nature, limited to moves among the current senior managers,” a Commission press release said.

Kristalina Georgieva, Vice-President in charge of Human Resources and Budget, said: “I am strongly committed to bring the share of female managers to 40% by the end of this mandate.”

Day’s retirement sees a woman leave one of the most influential posts in the Commission. She was appointed in November 2005 by Barroso and stayed on to smooth the power transition to Juncker’s administration.

She was not universally popular, despite earning high praise from Juncker, being caricatured as pulling the strings of the Commission behind the scenes, especially in terms of environmental legislation.

European Telecommunications Network Operators' Association Chairman Steven Tas said, "We congratulate Roberto Viola on his appointment as director-general of DG CNECT, and thank Robert Madelin for his collaboration in the past years. The telecoms community looks forward to continuing the positive collaboration with CNECT. We wish Roberto all the best and we will constructively work to collectively achieve faster network deployment".

The European Commission is divided into several departments, which are known as Directorate-Generals (DGs). Each DG is classified by policy area and headed by an EU official, the director general.

The top civil servant in the Commission is the secretary general. Today, a shake-up of director generals was announced as a reshuffle following the appointment of the new Juncker Commission last year.