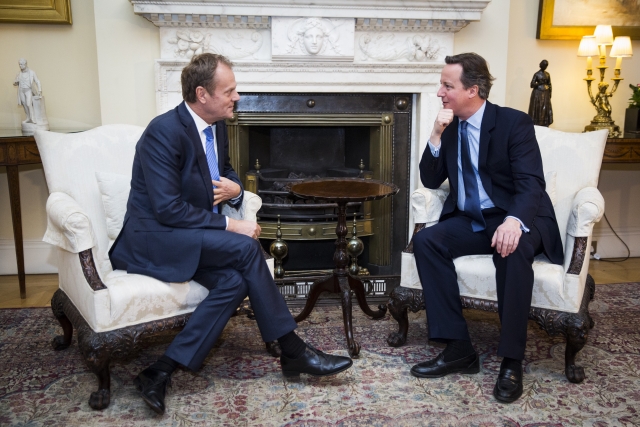 Talks between Tusk and Cameron yesterday did not finalise a deal. [European Council]

Britain and the EU have made progress on reforms that would help keep London in the 28-nation bloc. But there was no agreement, and all member states must accept a deal, the European Commission said on Monday (1 February).

Prime Minister David Cameron has promised to reform Britain’s ties to the European Union and hold a public vote on EU membership before the end of 2017. He hopes to reach a reform deal at a summit next month, with a view to holding the referendum as early as possible.

Among the most controversial of his demands is stronger powers to curb immigration, including barring EU immigrants from in-work benefits for at least their first four years in Britain – what some EU officials have come to call a “welfare brake”.

Talks with the chairman of EU leaders, Donald Tusk, did not bring a breakthrough on Sunday night and negotiations continue on Monday with a view to drafting a proposal that could be sent to all EU governments on Tuesday.

European Commission spokesman Margaritis Schinas told a regular news briefing that while there was progress at political and technical level, nothing was agreed until everything was agreed.

“We are not there yet, discussions continue, today at sherpa level involving the Council, the Commision and UK sherpas. The timing is in the hands of President Tusk and Prime Minister Cameron,” Schinas said.

“It is not enough for the Commission and Council lawyers to agree,” he said. “This is a process that is run at 28 (EU countries) and the Commission works for all 28 member states of the union.”

Asked if the Commission has prepared a proposal that would give Britain the right to apply the welfare brake now, but did not share the proposal yet with other EU governments, Schinas said: “Yes, right”. He later made clear this was not an affirmative answer but just an acknowledgement of the question.

Schinas stressed he could give no details of the talks.

“I will not comment on specific issues linked to the negotiation, not least because we work for 28 member states,” he said.

“It would be very unfair for the other 27 member states, that have not seen or discussed anything yet on the many issues that are on the table, for me to offer an opinion in the Commission press room,” Schinas said.

“We are making progress but there’s more work to do in all four areas – more work in some areas than others,” Cameron’s spokesman told reporters.

Cameron’s spokesman hailed as “substantial” signals from the European Commission that it could put forward a proposal to restrict social welfare payments for EU workers for up to four years.

Cameron’s spokesman said it was up to Tusk to decide when to publish the draft proposal, with a European source suggesting there could be “something tomorrow”.

Underlining the challenges ahead, Paris has reportedly threatened to block some of the proposals relating to the euro.

But Cameron’s spokesman played down the report.

“We’re not seeking to stand in the way of further euro integration,” he said.

“It’s not about the UK being able to veto further eurozone integration, it’s about having clear principles on the way for enforcing it,” he added.