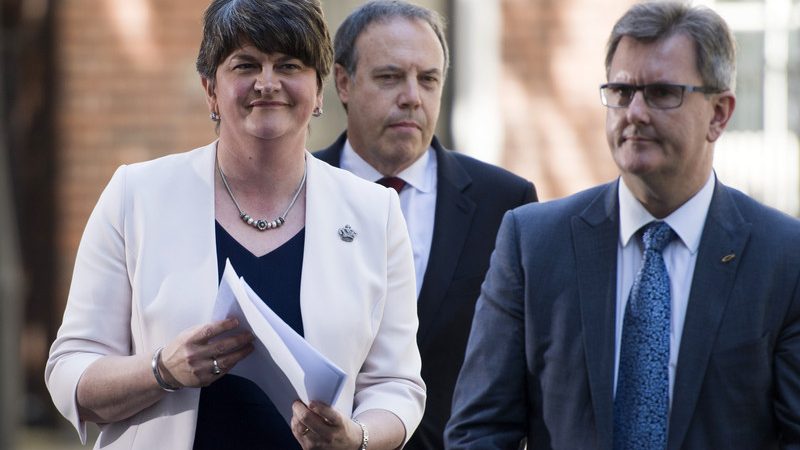 The leader of the largest unionist party in Northern Ireland on Monday 8 November hinted that the UK should suspend the Northern Ireland protocol as it undermined the Good Friday peace agreement. [EPA/WILL OLIVER]

The leader of the largest unionist party in Northern Ireland on Monday 8 November hinted that the UK should suspend the Northern Ireland protocol as it undermines the Good Friday peace agreement.

“The protocol upsets the very delicate constitutional balance that is at the heart of the agreement, it undermines our relationship with the rest of the United Kingdom in a way that is unacceptable to unionists,” he added.

“Let’s not lose sight of the fact there isn’t a single unionist elected representative that supports this protocol.

On Monday (8 November), the Progressive Unionist Party, the political wing of the Ulster Volunteer Force, a paramilitary group, said that it could no longer support the 1998 peace agreement because the protocol, which keeps Northern Ireland in the EU’s single market for goods and imposes customs checks on products travelling from Britain to Northern Ireland, violates the principle of consent from its communities.

The DUP was the only major unionist party not to support the Good Friday Agreement when it was first signed.

The remarks come amid growing speculation that UK Brexit minister David Frost is on the brink of invoking Article 16 of the Brexit agreement and suspending the protocol, which could have knock-on implications for the continuation of the Trade and Cooperation Agreement between the UK and EU.

Talks between UK and EU officials have been ongoing for several weeks to resolve differences over implementing the protocol. Still, both sides are playing down the prospects of a compromise.

EU officials have expressed concern that Boris Johnson’s government may pick a fight with the Commission over the protocol to deflect attention from a corruption scandal over MPs interests. Last week, the Johnson government attempted to overhaul the UK Parliament’s standards regulator after finding that Conservative MP Owen Paterson had brought Parliament into disrepute by lobbying the government on behalf of companies who paid him £100,000.

However, while the protocol is unpopular with most of the unionist community, opinion polls suggest that it is supported by a narrow majority of Northern Irish people.

“The protocol is a child of necessity…a unique set of circumstances to protect the Good Friday Agreement but also protect free movement,” Stewart Dickson, a lawmaker for the Alliance party, told EURACTIV.

Speaking in the Northern Ireland assembly on Monday, Declan Kearney, a junior minister in the devolved government from the republican Sinn Fein, told fellow lawmakers that “most people support the Protocol and believe that we have to make the protocol work.”

He added that it gave Northern Irish businesses unfettered access to both the EU and UK markets.

Meanwhile, Colum Eastwood, the leader of the Social Democratic and Labour Party (SDLP), called on UK ministers and the DUP to “think very carefully” about the language used concerning the protocol, adding that they were “creating more and more instability on the streets of Northern Ireland”.