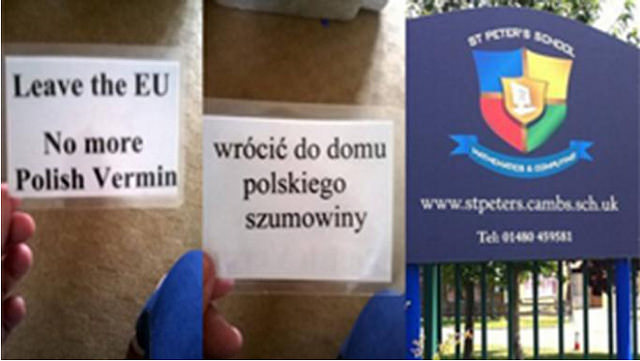 Anonymous anti-Polish flyposters outside a Cambridge school, the weekend after the Brexit referendum. [Twitter]

The Council of Europe voiced concern today (4 October) at a rise in racist violence in Britain in recent years, adding that campaigning for the Brexit referendum led to a further rise in “anti-foreigner sentiment”.

In a report, the Council’s European Commission against Racism and Intolerance (ECRI) condemned “considerable intolerant political discourse in the UK, particularly focusing on immigration”.

“It is no coincidence that racist violence is on the rise in the UK at the same time as we see worrying examples of intolerance and hate speech in the newspapers, online and even among politicians,” said ECRI Chair Christian Ahlund.

“The Brexit referendum seems to have led to a further rise in ‘anti-foreigner’ sentiment, making it even more important that the British authorities take the steps outlined in our report as a matter of priority.”

In a shock referendum result, Britain voted on June 23 to leave the 28-nation European Union.

Pro-Brexit supporters campaigned heavily on immigration, and the need to regain control on Britain’s borders, in a referendum battle fought against the background of Europe’s worst migrant crisis since World War II.

As well as “intolerance” which it said was promoted by the UK Independence Party (UKIP), the report also noted criticism of Prime Minister David Cameron when he talked in July 2015 about a “swarm” of migrants trying to reach Britain.

The 91-page report by the ECRI, its fifth to cover the United Kingdom, was compiled based on information up to March 17 this year, three months before the landmark Brexit vote.

The report was not all negative: it welcomed, “among other things, the entry into force of the Equality Act 2010 and the generally strong legislation against racism and racial discrimination in the country”.

It also noted “the government’s new hate crime action plan and substantial efforts to promote LGBT rights in the UK which have led to a significant change in attitudes.”

The ECRI produces regular reports on racism and intolerance and makes recommendations to the 47 member states of the Council of Europe.

One response to “Council of Europe: Brexit campaign fuelled ‘anti-foreigner’ feeling in Britain”