Dan Mulhall: Ireland will do ‘all we can’ to keep the UK in the EU 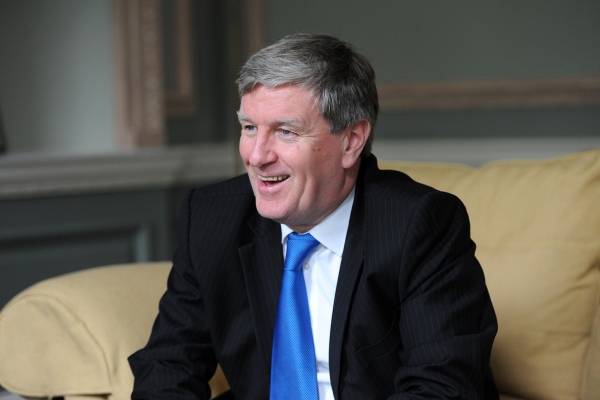 EXCLUSIVE: UK membership of the EU was in “fundamental Irish national interest”, and would adversely affect the whole EU, the Irish Ambassdor in London told EURACTIV.

Ireland will do “all that we can” to ensure the UK remains in the EU, stated Dan Mulhall.

“A British exit would inevitably weaken the Union, which is something that cannot be in Ireland’s interests,” said the diplomat.

The UK shouldn’t expect other member states to be “indifferent” or “tight-lipped” on the referendum debate because “it concerns the future of a Union to which we all belong”.

Mulhall said Ireland would back reforms that make the European Union “work better”, but warned now was not the time to engage in “radical treaty change”.

“I don’t think full blown treaty reform is appropriate or desirable at a time when Europe is emerging from the deepest recession in its history,” said Mulhall. “The Union needs to focus on economic recovery. Now is not the time to embark on ambitious programme of treaty change.”

Ireland is in the unique situation of being the only member state to share a land border with the UK. Mulhall said it would be “very unwelcome” were this to become an external EU border.

Mulhall said “practical solutions” would need to be found to stop the border becoming a barrier to trade and movement. He does not expect the change to negatively impact the peace process in Northern Ireland, but that any uncertainty was best “avoided”.

Speaking later at University College London’s European Institute, Mulhall said that shared membership of the European Union had helped relations between Ireland and the UK. He also remarked on the unique situation that the European Parliament presented of Loyalist and Unionist MEPs from Northern Ireland working alongside each other to get the best deal for the region.

Despite the economic hardships experienced by Ireland over the past six years, events “have not significantly dimmed public recognition in Ireland of the advantages of membership”, said Mulhall. Nor was there a “meaningful body of opinion in Ireland that yearns for an exit from the EU”.

The country also has no populist parties seeking to exploit the issue of immigration. Something Mulhall is “proud of”. Ireland’s history of emigration may have played a part in the Irish people “not being keen to place the blame on other people”, said Mulhall.

There has been criticism from fellow member states about Ireland’s low levels of corporate taxation. At 12.5%, it is viewed, especially by Britain and Germany, as unfair competition.

The issue of tax rates across member states came to the fore with the recent Lux Leaks revelations.

Mulhall was bullish on the topic saying “This is a matter of national competence. It is a vital part of what Ireland does to attract foreign investment,” adding that the tax rate was only one of a number of reasons foreign companies invested in Ireland.

Mulhall also told EURACTIV Ireland had a “strong commitment” to the Common Agricultural Policy and was unlikely to be in favour of “radical changes” to what Mulhall called “a successful policy”.

He also said a single seat for the European Parliament was not “on our agenda as a matter of priority”.

0 responses to “Dan Mulhall: Ireland will do ‘all we can’ to keep the UK in the EU”