This article is part of our special report Big data meets politics.

EXCLUSIVE / An analysis of over one and a half million tweets mentioning Brexit over the last two weeks indicates that Twitter users in the UK tend to support remaining in the EU.

As of Tuesday morning (21 June), 62% of tweets expressed support for the UK staying in the EU, according to data analysed by a group of researchers. Britons will vote in a referendum tomorrow on whether to stay in or leave the EU.

The SSIX consortium is a small group of data researchers and tech companies focused on data analytics. The group measured English-language tweets about Brexit from around Europe, counting 73.1% of activity from Twitter users in the UK.

After the UK, Twitter users in the Netherlands were most vocal about Brexit, sending out more than 10% of all the tweets measured.

Tweets from Ireland made up around 3% of the total, while Greek Twitter users accounted for 2% of tweets. Belgium, France, Germany, Spain and Italy each made up less than 2% of the total number of tweets on Brexit.

SSIX partnered with euractiv.com and shared the data it aggregated on Brexit. German newspaper Handelsblatt is also a partner in the consortium. 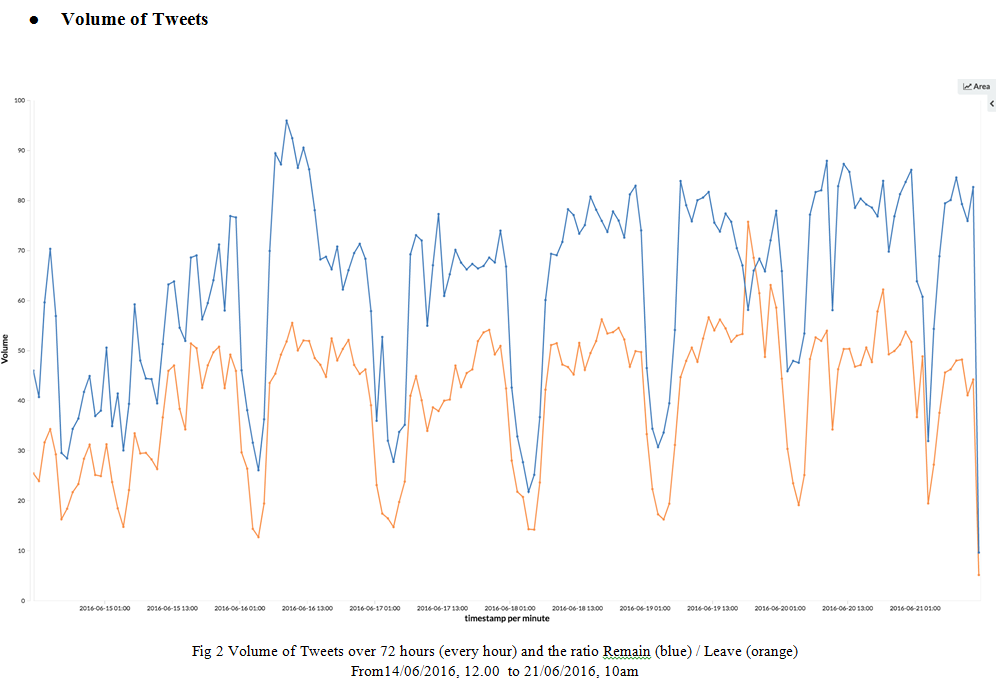 Volume of Tweets from 14 June to 21 June. Remain is shown in Blue, Leave in Orange. [SSIX - Social Sentiment Index]

Laurentiu Vasiliu, CEO of Peracton, a Dublin-based software company specialised in financial data analysis and part of the SSIX consortium, said British humour made it hard to judge whether some Twitter users were for or against Brexit.

“You’d see a tweet that says ‘vote leave’ but when you click on the link you’d see Donald Trump saying something and it was clear the user was definitely not making the case to vote for leave,” he added.

The software set up by SSIX also counted tweets that were neutral or expressed disinterest in Brexit, but those weren’t calculated in the number of tweets that expressed clear support for one side.

Vasiliu said the researchers used anonymous data and set up an algorithm to categorise tweets automatically. They didn’t record Twitter profiles or whether tweets were retweeted, liked or went viral.

But based on the one he saw, Vasiliu estimated that the tweets aggregated over the last two weeks were likely written by Twitter users from different age groups, and most were young or middle aged. 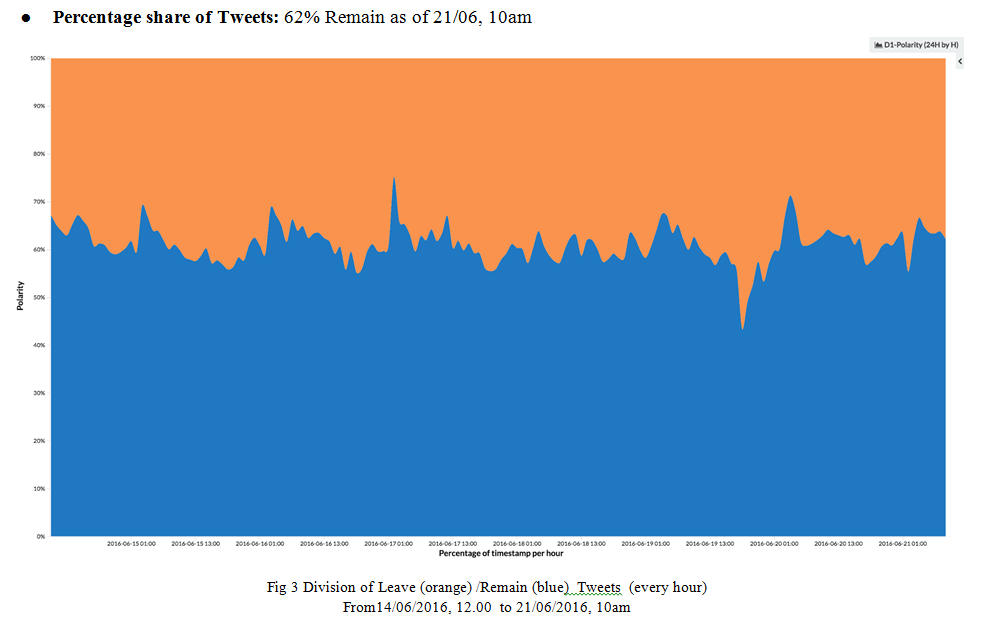 Vasiliu is gearing up the data mining project to use again ahead of the US presidential election this November and during the German Bundestag election campaign in autumn 2017. By then, he hopes to also aggregate data from other social media platforms to monitor what candidate voters are leaning towards.

Other social media outlets have already started collecting their own data on how users communicate about Brexit. But while SSIX uses data mining software to try to detect social media users’ political tendencies, Facebook and Google measured the popularity of topics. The companies did not indicate whether more of their users supported Brexit or remaining in the EU.

More than 525,000 people like the ‘Vote Leave’ Facebook group, while around 521,000 like the group ‘Britain Stronger in Europe’. That could mean Facebook users are more likely to support Brexit than active Twitter users, since SSIX pointed to more tweets in support of remaining in the EU.

Among Facebook users in the UK, the most common topic of discussion related to Brexit between 5 March 5 and 7 June was the economy, followed by immigration and health.

Most people in the UK who posted about Brexit on Facebook were between the ages of 25 and 44—and more than 52% of them were men.

Facebook drew on more of its users’ personal data including age and gender, whereas the SSIX project only registered Twitter users’ geographical locations if they made that public.

Google set up a website detailing search habits related to Brexit that ranks common search questions, including the popularity of Brexit as a search topic in other EU countries.

According to Google’s data, search queries about Brexit from within the UK have been more frequent than searches about remaining in the EU since 15 June.

Since late May, Google users in Britain have most frequently searched for how Brexit will affect immigration, followed by the national health service and the economy as shown in the graph below.

Google’s data on how often people in other EU countries searched for information about the UK referendum places Ireland at number one. Malta comes in at second place, followed by Cyprus and Luxembourg.

European countries relying on finance as a source of revenue are becoming increasingly concerned about Brexit, according to search data from Google. And with good reason: rating agency S&P has highlighted just how sensitive their economies are to the UK. EURACTIV France reports.