Membership of EFTA is still a possibility for the United Kingdom after Brexit. [EFTA]

Liechtenstein first nominated Carl Baudenbacher as its pick for EFTA judge in 1995 and he took on the mantle of court president in 2003. The Luxembourg-based institution announced he would leave his post as of March next year.

This could deal a blow to any British hopes of joining the trade bloc as Baudenbacher has been a keen exponent of the UK pursuing the so-called ‘Norway model’ after Brexit. In September, the Liechtensteiner gave a series of speeches in London pushing EFTA as a viable option.

Baudenbacher afterwards said he had not discussed the idea directly with the British government during his London trip but insisted that in theory, it could work. 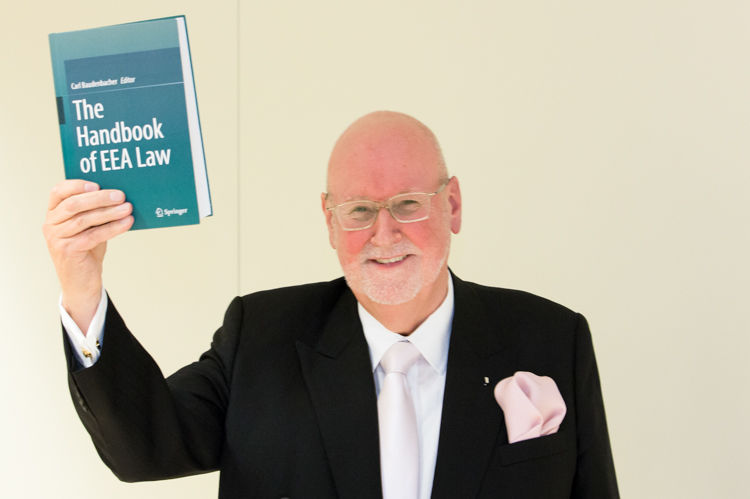 He added that three options are available: Britain could become a full-fledged EFTA member; it could “dock” to the court and adopt some of its principles on a long-term basis; or it could dock for a shorter period, during the post-Brexit transition.

Baudenbacher, also an expert in EU-Swiss policy, said the idea of docking with the EFTA court has been floated in the past, when Switzerland and the EU were working out their relationship. Switzerland is a member of EFTA but not the EFTA court.

Switzerland ultimately ruled out the idea and went with a different framework.

Swiss voters would rather maintain close economic ties with the European Union than adopt immigration curbs that could jeopardise Switzerland’s access to the EU single market, a survey published on Sunday (1 January) showed.

During a radio interview with the BBC, Baudenbacher was accused of trying to lure the UK into EFTA in order to increase the bloc’s standing and prevent his court from being “outgunned” by the EU’s own Court of Justice (ECJ).

The president refuted that suggestion, saying he merely wants the court to “flourish” due to his own sense of “institutional loyalty”. He added that the EFTA court is “functioning fairly well and we are having a good time doing the job we have been assigned”.

But writing for the London School of Economics in September, Baudenbacher said that “it is clear that with a British judge, the EFTA court could further strengthen its profile without giving up the overall goal of realising a homogeneous European Economic Area.”

Is EFTA even an option for the UK?

On a technical level, it seems that there is little to stop the UK from joining EFTA in some capacity once it leaves the EU.

But British Brexit minister David Davis said in September that while Westminster had considered becoming a full member, the idea had been ruled out as “the worst of all outcomes”. There has been little comment since from the UK government on Baudenbacher’s “docking” idea.

Britain’s biggest objections to EFTA membership are that London would have to accept the EU’s rules without having a vote on them, including free movement of workers.

It is also unclear whether the EFTA court’s current members – Iceland, Liechtenstein and Norway – would agree to allow one of Europe’s largest economies to join.

Norway has already expressed doubts about Britain’s re-joining EFTA itself, citing concerns that it would open the Nordic country up to disputes with the EU. But Iceland has been more positive about the idea.

Earlier this year, Icelandic Foreign Minister Guðlaugur Thór Thórðarson told British media that the UK “could definitely join EFTA” and that it would “strengthen EFTA to at least have cooperation with Britain”.

Thórðarson also insisted that Iceland’s single market access, without the EU’s mandatory “political integration”, had allowed his country to go from “probably the poorest nation in Western Europe at the beginning of the last century” to being “quite wealthy”.

Now that Baudenbacher is out of the picture, the chances of EFTA unanimously agreeing to sanction British membership, have arguably been significantly reduced.

Founded in 1994, the EFTA court deals mainly with the rules of the European Economic Area and their implementation. It has no jurisdiction in the 28-member EU.

The EFTA system of enforcing rules is considered less rigorous than the ECJ‘s, which has been criticised by British policymakers and some of the British media for being too intrusive.

But the European Commission says the UK should remain under the jurisdiction of the ECJ for resolving any disputes during the transition after March 2019.

The EFTA court consists of three judges, one nominated by each of the EFTA states party to the EEA Agreement. The judges are appointed by common accord of the governments for a period of six years. The judges elect their president for a term of three years.