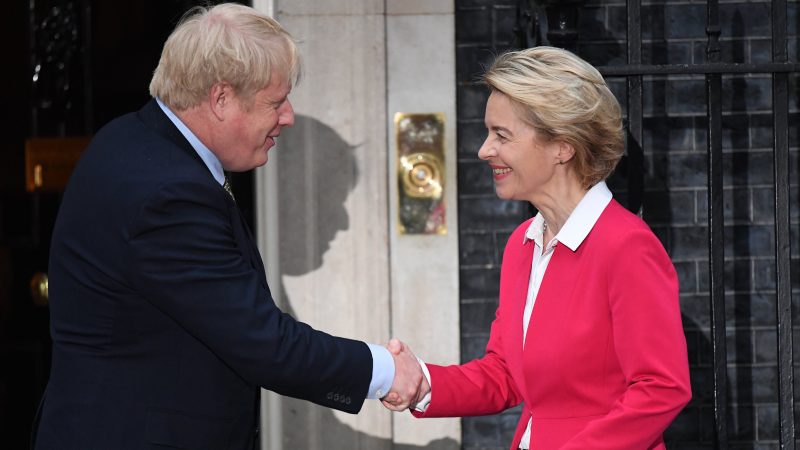 The European Union and Britain on Thursday (24 December)  struck a post-Brexit trade deal to cushion the economic blow of the UK’s imminent departure from the single market after 10 months of tortuous negotiations.

The deal is done. pic.twitter.com/zzhvxOSeWz

“We have finally found an agreement,” said the president of the European Commission Ursula von der Leyen.

“It was a long and winding road, but we have a good deal at the end of it,” she said. “The single market will be fair and remain so.”

Britain formally left the EU in January after a deeply divisive referendum in 2016, the first country to split from the political and economic project that was born as the continent rebuilt in the aftermath of World War II.

London remains bound by the EU’s rules during a transition period that runs until midnight on December 31, when the UK will leave the bloc’s single

The final 2,000-page agreement was held up by last-minutre wrangling over fishing as both sides haggled over the access EU fisherman will get to Britain’s waters after the end of the year.

Following the announcement of the political accord, von der Leyen’s Commission will send the text to the EU member states.

They are expected to take two or three days to analyse the agreement and decide whether to approve its provisional implementation.

The UK parliament will also have to interrupt its end of year holidays to vote on the deal before the 31 December cut-off.

Once it is signed off and the text published in the EU’s official journal it will go into effect on January 1 when Britain has left the bloc’s single market.

The European Parliament will then have a chance to retrospectively approve the deal, at some point in 2021, EU officials said.

Assuming the process goes as planned, the negotiating teams will have agreed the mammoth deal in record time.

And the 11th hour deal heads off the threat that Britain could crash out of the club after 47 years of shared history with no follow-on rules.

With Britain outside the EU single market and customs area, cross-Channel traders will still face a battery of new regulations and delays.

Economists expect both economies, already weakened by the coronavirus epidemic, to take a hit as supply chains are disrupted and costs mount.

But the threat of a return to tariffs will have been removed, and relations between the former partners will rest on a surer footing.

It is also a success for Von der Leyen and her chief negotiator Michel Barnier, who led almost 10 months of intense talks with Britain’s David Frost.

After the 2016 referendum, in which British voters chose to leave the union, Brexiteers boasted that they could win the “easiest trade deal in history”.

The argument was that, after conducting business according to EU standards and regulations for so long, the economies would be a good fit for each other.

But European capitals were concerned that if such a large rival on their doorstep were to deregulate its industry their firms would face unfair competition.

Brussels insisted the only way to keep the land border between Ireland and the UK open was to keep Northern Ireland, a British province, within its customs union.

And members balked at giving up access to Britain’s rich fishing waters, which support fleets in France, Belgium, Denmark, Ireland and the Netherlands.

It was the question of fish that emerged as the last stumbling block as late as this week, when member states — led by France — rejected a UK offer.

London pushed to reduce EU fishing fleets’ share of the estimated €650-million annual haul by more than a third, with changes phased in over three years.

The EU, in particular countries with northern fishing fleets like France, Denmark and the Netherlands — was insisting on 25% over at least six years.

It is not yet clear what the numbers are in the final deal, but European diplomats stressed that they would not have signed off on it unless the UK gave ground.

Barnier briefed ambassadors and then senior MEPs on Tuesday that he had made his last offer on fish and that it was now up to political leaders to decide.

This triggered a round of telephone calls between Johnson and von der Leyen that led to Wednesday’s night’s pre-Christmas compromise.

Scottish First Minister Nicola Sturgeon to the news by saying it was time for Scotland to be “an independent, European nation”.

“Before the spin starts, it’s worth remembering that Brexit is happening against Scotland’s will,” she added on Twitter.

Before the spin starts, it’s worth remembering that Brexit is happening against Scotland’s will. And there is no deal that will ever make up for what Brexit takes away from us. It’s time to chart our own future as an independent, European nation.

“And there is no deal that will ever make up for what Brexit takes away from us.”