Michel Barnier told a packed Brussels press conference that finalising the divorce terms in October would give the European Council, European Parliament, and the UK Parliament five months to ratify the deal.  Britain would quit the EU in March 2019.

But he said that timeline will only stand if UK Prime Minister Theresa May keeps her promise to trigger Article 50, the legal process taking the UK out of the EU, before the end of March 2017. Article 50 foresees a two-year period of negotiations.

“Time will be short when we receive the notification [of Article 50],” Barnier said, “It is clear the period of actual negotiations will be shorter than two years.”

“There will be less than 18 months to negotiate,” he added. “The negotiations need to be done by October 2018, that is just before the European elections.”

Barnier warned, “We are entering uncharted waters. The work will be legally complex, politically sensitive and will have important consequences for our economies and first of all for our people on both sides of Channel.”

He urged May to trigger Article 50 as soon as possible. “We all have a common interest in not prolonging this atmosphere of uncertainty,” he said.

Barnier warned that there would be no negotiations before Article 50 was triggered but hinted at some of the EU’s possible red lines.

There has been much discussion in Britain over whether the UK could remain a member of the European Single Market after it leaves the EU.  In particular, the British government has said the 23 June referendum vote has given them a mandate to introduce curbs on the freedom of movement of EU citizens.

But Barnier said there was no way that the British could enjoy Single Market access with such curbs.

“The Single Market and four freedoms are indivisible. Cherry-picking is not an option,” he said.

Asked if the UK could pay into the EU Budget for access to the Single Market, an option hinted at by British Brexit boss David Davis, Barnier said it was possible.

“You can have a look at the European Economic Area, at Norway and Iceland, to get an idea of what it could look like,” he told reporters.

“In the case of Norway, it has access to Single Market but this is with predetermined, very specific contributions to the EU budget. It is one of closest models to being in the EU without being a member. “

Barnier said, “I do not want to speculate on what future relations will be. It is for the British to say what kind of relationship they want and for the 27 member states to define the future we want to build with the British.”

The debate over Single Market access has led to calls for a “hard Brexit”, which would take the UK out of the market and the Customs Union.

Barnier said, “Frankly I do not know what a hard or a soft Brexit is. I can say what a Brexit is – clear, ordered and will work within the European Council guidelines on the content of negotiation.”

“This will be of a different legal nature and will, in fact, create a new partnership with the UK after its departure.”

Asked if there could be a transitional period in UK_EU relations before Brexit enters into force, Barnier said it was difficult to say until the British said how they saw the future relationship.

Barnier was asked what Brexit would mean for Northern Ireland, which would become a border with the EU.  There are fears that could destabilise the peace process in both countries.

“We will in negotiations do our utmost to find a way to preserve the success of the Good Friday Agreement,” said Barnier.

In response to questions about whether the Commission would negotiate with Scotland, which wishes to remain in the EU, the executive said the UK was the “sole interlocutor” in the Article 50 negotiations. 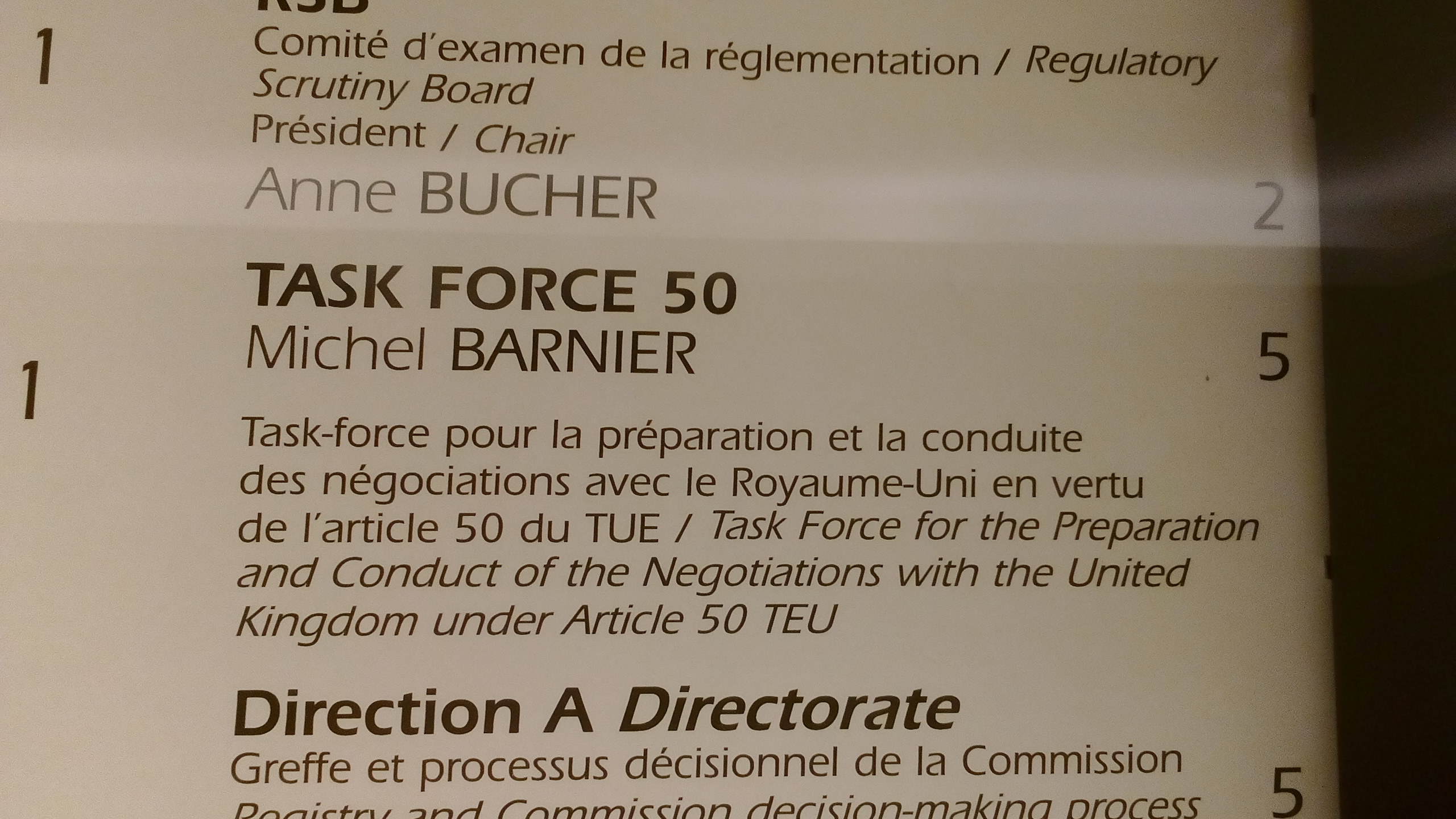 The French politician was appointed by Commission President Jean-Claude Juncker two months ago to head up the executive’s Brexit team. He has visited 18 EU countries as part of a tour of the bloc to consult with national governments.

The former Commissioner in the Prodi and Barroso Commissions has a “small team” of 30 experts. They have scanned EU laws to identify what areas need to be negotiated in the post-Article 50 talks.

He has also been in regular contact with the Council, Parliament, European Central Bank, European Investment Bank and the European Court of Justice.

When Barnier was Internal Market Commissioner, responsible for EU financial services legislation, he had an occasionally testy relationship with the City of London.

There have also been reports since denied, that he was insisting on the Brexit talks being conducted in French.  At the beginning of the press conference, he joked “In French or English?” before switching between the two languages over the course of the conference.

“Let me also add a very personal remark,” he said, “I was 20 years old , a very long time ago, when I voted for the first time and it was in the French referendum on the accession of the UK to the EU.

“That time I campaigned for a yes vote. And I still think today that I made the right choice.”

But Barnier took a swipe at the Brits, who reportedly described the Brexit team as “very French”, at the end of the conference.

“Unity is the strength of the EU and President Juncker and I are determined to preserve the unity and interest of the EU-27 in the Brexit negotiations.

Referring to an iconic British poster that urged Brits to “Keep Calm and Carry On” during World War Two, Barnier added, “We are ready. Keep calm and negotiate.”