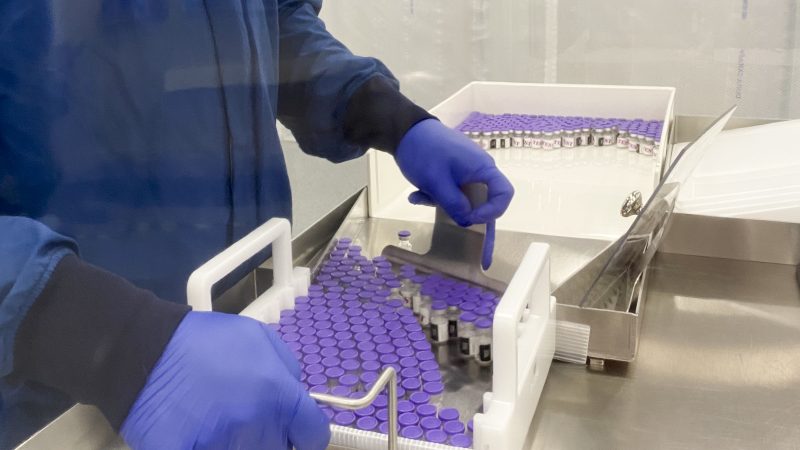 A handout photo made available on 30 November 2020 by pharmaceutical company Pfizer shows vials of Covid-19 vaccine in an undisclosed laboratory on 16 November 2020. [Handout photo/EPA/EFE]

Britain became the first western country to endorse a COVID-19 shot. The decision was made under an ultra-fast, emergency approval process, which allowed the British drugs regulator to temporarily authorise the vaccine only 10 days after it began examining data from large-scale trials.

The move to grant emergency authorisation to the Pfizer/BioNTech vaccine has been seen by many as a political coup for UK Prime Minister Boris Johnson, who has led his country out of the EU and faced criticism for his handling of the pandemic.

In an unusually blunt statement, the European Medicines Agency (EMA), which is in charge of approving COVID-19 vaccines for the EU, said its longer approval procedure was more appropriate as it was based on more evidence and required more checks than the emergency procedure chosen by Britain.

The agency said on Tuesday it would decide by 29 December whether to provisionally authorise the vaccine from US drugmaker Pfizer Inc and its German partner BioNTech SE .

A spokesman for the European Commission said the EMA’s procedure was “the most effective regulatory mechanism to grant all EU citizens’ access to a safe and effective vaccine,” as it was based on more evidence.

The EMA started a rolling review of preliminary data from Pfizer trials on 6 October, an emergency procedure aimed at speeding up possible approval, which usually takes at least seven months from reception of full data.

The UK regulator launched its own rolling review on 30 October, and analysed less data than made available to the EMA.

“The idea is not to be first but to have a safe and effective vaccine,” Germany’s Health Minister Jens Spahn told a news conference.

Asked about the emergency procedure used by Britain, he said EU countries had opted for a more thorough procedure to boost confidence in vaccines.

“If you evaluate only the partial data as they are doing they also take a minimum of risk,” the EMA’s former head Guido Rasi told an Italian radio.

“Personally I would have expected a robust review of all available data, which the British government has not done to be able to say that without Europe you come first,” he added.

EU lawmakers were even more explicit in their criticism of Britain’s move.

“I consider this decision to be problematic and recommend that EU member states do not repeat the process in the same way,” said Peter Liese, an EU lawmaker who is a member of German Chancellor Angela Merkel’s party.

“A few weeks of thorough examination by the European Medicines Agency is better than a hasty emergency marketing authorisation of a vaccine,” said Liese, who represents the centre right grouping, the largest in the EU Parliament.

Under EU rules, the Pfizer vaccine must be authorised by the EMA, but EU countries can use an emergency procedure that allows them to distribute a vaccine at home for temporary use.

‘A little pressure on US’

“This should be very reassuring. An independent regulatory authority in another country has found this vaccine to be safe and effective for use,” US Health Secretary Alex Azar told Fox Business Network on Wednesday.

The British approval is also likely to “put a little pressure on” US regulators to move swiftly, said Kirsten Hokeness, an immunology and virology expert at Bryant University in Rhode Island.

The head of the US Centers for Disease Control and Prevention warned on Wednesday the COVID-19 pandemic, still raging with unprecedented fury nationwide, will pose the country’s grimmest health crisis yet over the next few months, before vaccines become widely available.

The sober message from one of the nation’s top health officers followed Thanksgiving holiday observances in which millions of Americans disregarded warnings to avoid travel and large gatherings even as COVID infections and hospitalisations surged largely unchecked.

Besides the monumental loss of life, Redfield said, the country faces the prospect of a healthcare system strained to the point of collapse. The contagion has now reached every corner of the country – with 90% of all hospitals in areas designated as coronavirus “hot zones” – and continues to spread on a much steeper trajectory than any previous wave of the pandemic.

“The reality is that December, January and February are going to be rough times,” Redfield told a livestream presentation hosted by the US Chamber of Commerce Foundation. “I actually believe they’re going to be the most difficult time in the public health history of this nation.”

President-elect Joe Biden amplified the bleak forecast during a roundtable with workers and small business owners hard hit by the devastating economic fallout of the pandemic.

“Christmas is going to be a lot harder. I don’t want to scare anybody here, but understand the facts – we’re likely to lose another 250,000 people dead between now and January. You hear me?” Biden said.

More than 270,000 Americans have died from COVID-19 to date. And the University of Washington’s influential Institute for Health Metrics and Evaluation has projected the toll could reach nearly 450,000 by 1 March without greater attention to social distancing and mask-wearing.