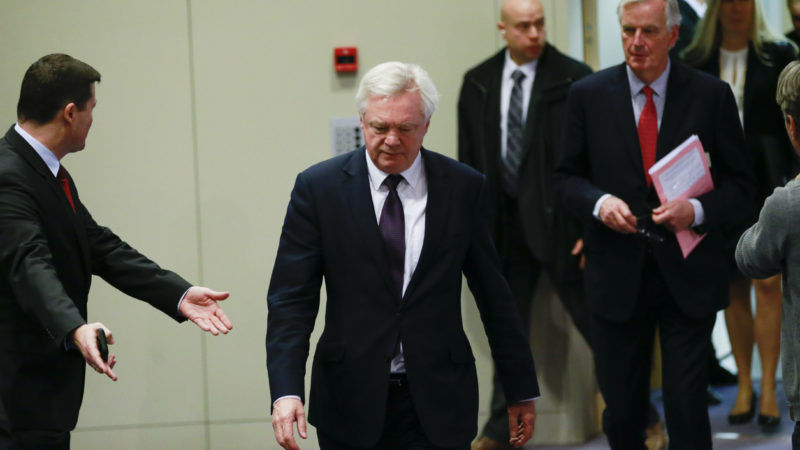 Britain's Secretary of State for Exiting the European Union, David Davis (C) and Michel Barnier (R), the European Chief Negotiator of the Task Force for the Preparation and Conduct of the Negotiations with the United Kingdom under Article 50 enter the room by the emergency exit to attend British Prime Minister Theresa May press briefing on Brexit Negotiations in Brussels, Belgium, 8 December 2017. [Olivier Hoslet/EPA/EFE]

The European Union has played down talk by Britain’s Brexit minister that last week’s interim accord is not binding and will launch new talks on Friday (15 December) that are “David Davis-proof”, a senior EU official said.

The comment on Tuesday followed Brexit Secretary Davis’s weekend remark that outline divorce terms were more a “statement of intent” than legally binding.

The EU official told reporters that EU leaders meeting on Friday will ram home in guidelines to their negotiator that Britain must honor its agreements so far if it wants to discuss the future free trade treaty it wants.

Davis himself pledged to convert last Friday’s deal into “legal text” as soon as possible after he spoke to the European Parliament’s Brexit point man. Guy Verhofstadt branded Davis’s earlier comment “unhelpful” and said that what the EU executive calls a gentleman’s agreement must be made legal.

British and EU officials said that would mean agreeing the formal withdrawal treaty within the coming year so that it can be ratified by their parliaments before Brexit in March 2019.

Davis’s EU counterpart, Michel Barnier, said he aimed in the new year to present a draft of a withdrawal treaty that would reflect the accords struck with Prime Minister Theresa May last week on settling financial obligations, the rights of expatriate citizens and ensuring no “hard” EU border with Northern Ireland.

Adding to the debate over how far London is bound by May’s deal, Barnier insisted there should be “no backtracking” if London is to have the trade negotiations it so much wants.

That is spelled out in legal language in the negotiating guidelines which leaders are expected to approve on Friday after May has left the summit: “Negotiations in the second phase can only progress as long as all commitments undertaken during the first phase are respected in full and translated faithfully into legal terms as quickly as possible,” the draft guidelines read.

DD might do well to remember what bits that are said behind the scenes are ok to say in public. Draft #EUCO conclusions now state that phase 2 negotiations can only progress as long as exit deal “translated faithfully in legal terms as quickly as possible” https://t.co/GjGJoZ2oyn

That, the senior EU official said, made clear there could be no going back, as Davis had implied might be possible: “The guidelines are David Davis-proof,” the official said.

Guidelines were sent by summit chair Donald Tusk to the 27 other national leaders on Friday. They were little changed when their aides met on Monday to prepare the meeting, principally to spell out more clearly the timing of the next steps in the process and to emphasize continuing obligations on London.

I’ve sent #Brexit guidelines for 2nd phase to EU27 leaders. While being satisfied with today's agreement, let's remember that the most difficult challenge still ahead. Breaking up is hard. But breaking up and building a new relationship is much harder.https://t.co/dH6isGt11H

An intention to start negotiating a transition period from Brexit to a future trade pact early in 2018 now includes a plan to be able to launch talks in January. The new draft makes clearer that talks on what happens after transition will start only after further guidelines are agreed in March.

Tusk, in his formal letter on Tuesday inviting leaders to the summit, warned there was no time to lose and highlighted a gnawing concern in Brussels that keeping divergent interests among the 27 in check may be much harder when it comes to a free trade treaty than it has been in settling Britain’s divorce.

“This will be a furious race against time, where again our unity will be key,” Tusk wrote. “And the experience so far has shown that unity is a sine qua non of an orderly Brexit.”