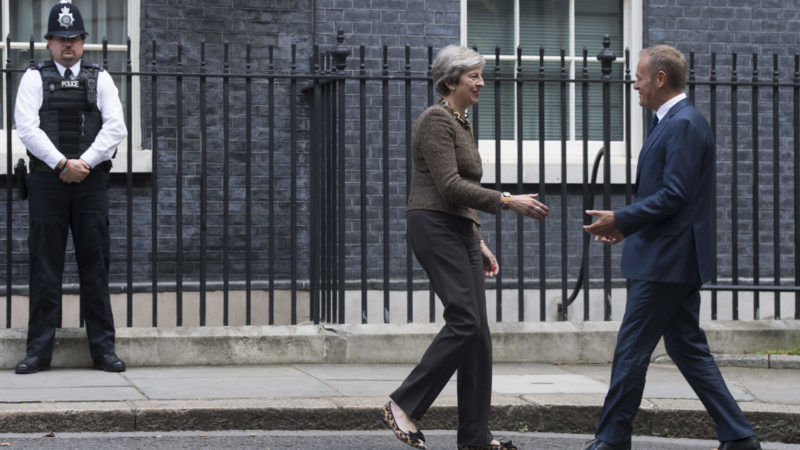 British Prime Minister Theresa May welcomes the President of the European Council Donald Tusk, ahead of a meeting in Downing Street in London, Britain, 26 September 2017. [Will Oliver/EPA/EFE]

Draft conclusions submitted by summit chair Donald Tusk to the 27 other EU governments made final Brussels’ rejection of opening free trade talks now. But they also but gave the beleaguered British prime minister hope that they would do so in December – and that, if she ups her offers on divorce terms, the EU will be ready to start talking almost right away.

With nerves fraying and threats flying about walking out without a deal come the March 2019 deadline for departure, the pound took a knock when EU negotiator Michel Barnier said a new round of talks this week had ended in continued deadlock over a British refusal to clarify how much it will pay on leaving.

But it rallied on word that, despite tough demands from EU governments on what they want from London, the Union is ready to talk about how to avoid a “hard Brexit” and to ease Britain out with less disruption – probably by agreeing to keep it in the single market for a couple of years, diplomats say.

The draft of conclusions which would be issued by leaders of the 27 next Friday, a day after meeting May in a full EU summit, still have to be agreed. Envoys, including from heavyweights Germany and France, objected last week to a suggestion from Barnier that the EU should start working on transition plans.

But EU officials noted that Tusk, the European Council president, has sounded out most national leaders in recent days – he briefed May by on his preparations on Thursday (12 October).

Phone call this evening with PM @theresa_may to discuss the October #EUCO. #Brexit

A senior EU official closely involved in the negotiations said Brussels did not expect major changes to the summit text.

A diplomat from one big country said only that the text would be discussed by national envoys in Brussels on Friday.

The first version, seen by Reuters, confirms what Barnier and others have said this month: that there is not “sufficient progress” on agreeing three key elements of a withdrawal treaty for leaders to agree now to open the trade talks May wants.

But in an effort to defuse accusations in Britain about EU intransigence, the leaders would welcome progress to date on their three key issues: the rights of 3 million EU citizens in Britain; protecting peace in Northern Ireland from the effect of a new border on the island; and Britain’s outstanding payments.

They would pledge to reassess things at their next summit in mid-December – Barnier yesterday spoke of making progress in the next two months. And in order not to waste time once they do decide to launch talks on a post-Brexit future, they would ask Barnier and their envoys to start preparing now for a transition – albeit without actually starting talking to Britain about it.

“The European Council invites the Council (Article 50) together with the Union negotiator to start internal preparatory discussions,” the draft read. Another EU official said that would avoid weeks of delay in launching a new phase by the new year – which business leaders say is vital if they are to make informed investment decisions in 2018 for the time after Brexit.

Without a good idea by early next year of what a transition period will look like, international businesses in Britain would start to “vote with their feet” and move operations to the continent for fear of a “hard Brexit”, some have warned.

The uncertain grip May, who campaigned last year against Brexit, has over her party and hardliners demanding she resist EU demands and be ready to walk out with no deal, has left Europeans unsure of where negotiations may lead. The gesture to May reflects some willingness to help reinforce her in office.

Barnier and his British counterpart, Brexit Secretary David Davis, told reporters there had been some progress this week on citizens’ rights and the Irish border question. Davis renewed his call for EU leaders to give a green light to trade talks next week but that has long been a forlorn hope.

Barnier made clear that despite new momentum from May’s concessions in a speech at Florence last month, British proposals still failed the “sufficient progress” test, notably on tens of billions of euros the EU says London owes.

May said Britain would ensure the other 27 countries did not lose out financially from Brexit in the current EU budget period to 2020 and would honour commitments – but Barnier said London was failing to spell out just what it was ready to pay.

“There was no negotiation on this, but we did have technical discussions which were useful,” he said. “We are, therefore, at a deadlock on this question. This is extremely worrying for European taxpayers and those who benefit from EU policies.”

Nonetheless, he offered hope: “I am still convinced that, with political will, decisive progress is within reach in the coming two months. With David Davis, we will organise several negotiating meetings between now and the end of the year.”

May herself said there had been “good progress” and welcomed Barnier’s talk of further progress “over the coming weeks”.