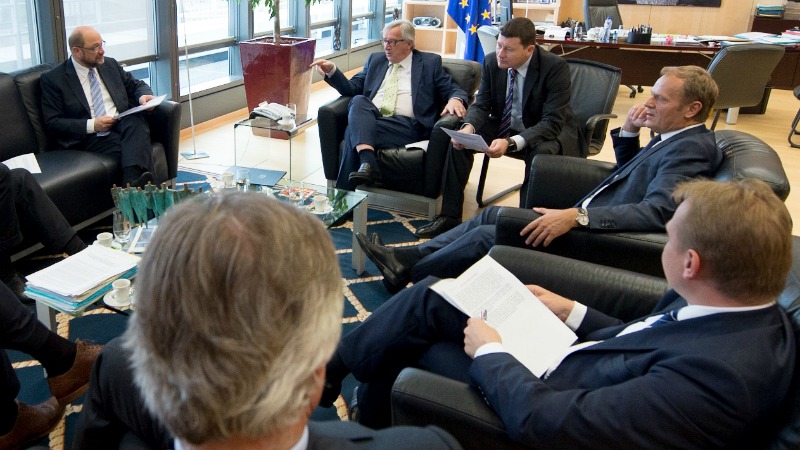 The Presidents of the European institutions have sent reassuring emails to EU officials of British nationality, telling them not to worry about their jobs just yet, after the UK’s decision to leave the European Union. But some still fear for their position in the longer run.

British officials in Brussels woke up in dismay at the news that UK voters had decided to leave the EU.

“Honestly, most people are just in shock,” said a British official at the European Commission who spoke to euractiv.com on condition of anonymity.

“People are really upset. Some tears were shed, some people were crying. It has really hit people hard, both Brits and non-Brits.”

Some Brits are now worried because of the uncertainty around their jobs.

There are an estimate 1,200 UK nationals working at the European Commission and hundreds more in the European Parliament and the EU Council of Ministers. The 73 British MEPs also have staff on contract, most of them temporary jobs linked to the MEP’s five-year mandate.

“I know that many of you are concerned about your future after this vote,” said Jean-Claude Juncker, the President of the European Commission, in an internal email sent to staff in Brussels and elsewhere.

“So I want to send a clear message to you,” he wrote in the letter, seen by EURACTIV. “According to our Staff Regulations, you are ‘Union officials’. You work for Europe. You left your national ‘hats’ at the door when you joined this institution.”

“That door is not closing on you now.”

The European Commission has tried to respond to grumbling in the French press about the preferential use of English in EU institutions, saying it is doing its best to maintain multilingualism in the face of budget constraints.

The President of the European Parliament, Martin Schulz, sent a similar message to British colleagues, saying he will show “reciprocal loyalty” and defend their interests in the UK’s upcoming negotiations to leave the EU.

“I appreciate that many of you have concerns about your personal future,” he said, echoing worries that British officials in the EU institutions might lose their jobs.

But he sought to assuage those fears, saying: “You have shown your loyalty to the European idea”.

“In this spirit of reciprocal loyalty I will work together with the Presidents of the other European institutions to ensure that we can all continue to count on your outstanding talent, experience and commitment,” Schulz wrote.

Juncker used the same terms in his own message, saying he continued to count on the “outstanding talent, experience and commitment” of British officials working in the Commission.

The former Luxembourg prime minister further tried to assuage the concerns of Brits who have moved to Brussels with their families.

“I know you all have legitimate expectations about your rights and duties, your families who might have followed you to Brussels and your children who might be enrolled in schools here. Let me assure you that I will do everything in my power as President of the Commission, to support and help you in this difficult process.”

However, some British officials fear things might change for the worse in the longer run.

“We’ve been assured that the status of British officials will be honoured,” said the British official who works at the Commission. “They are saying, ‘don’t worry you’ll be fine’ but some people are wondering how can you say that?”

“There are nationality quotas to be met, and then if UK funding is pulled out? There will have to be cuts somewhere, and we would be the obvious choice.”

One response to “EU tells shocked UK staffers: ‘We’re not closing the door on you… now’”