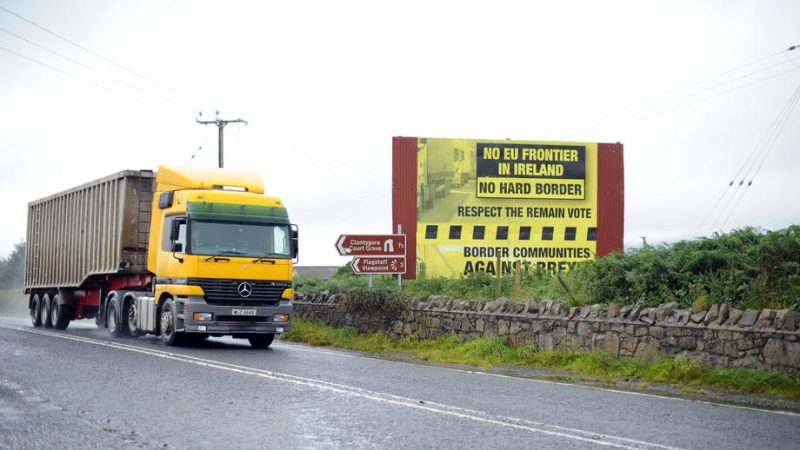 File photo. A truck passes a sign calling for not returning to hard border crossings after Brexit near Killeen, Northern Ireland, Britain, 21 August 2017, near the border with the Republic of Ireland. [EPA-EFE/AIDAN CRAWLEY]

The European Commission is due to set out on Friday (17 December) legal changes to ease the transport of medicines from Britain to Northern Ireland, a move that could relieve EU-UK tensions over the British province’s future after Brexit.

The flow of medicines is currently unimpeded, but set to change when a grace period expires at the end of the year.

Then British operators would need to move regulatory compliance and logistics and testing facilities to the European Union or to Northern Ireland, which is part of the United Kingdom but within the EU single market for goods.

The cost of the move could result in certain companies deciding to stop supplying medicines to Northern Ireland, exacerbating trading problems the province is facing after Brexit.

The EU executive is set to propose an exception to existing law to allow compliance and logistics to be located in the British mainland.

The change could also benefit other smaller markets – Cyprus, Ireland and Malta – that have traditionally received certain medicines from Britain.

A further change, solely for Northern Ireland, could allow marketing of drugs in Northern Ireland after they have been authorised by the British medicines regulator, but before approval from the European Medicines Agency.

This move could, for example, affect new cancer treatments.

The Commission declined to comment on the substance of any proposals.

The changes, which would require approval by the European Parliament and EU governments during 2022, do not represent a formal agreement with Britain on the subject.

It has advocated removing medicines entirely from the protocol that sets out the post-Brexit trading arrangements of Northern Ireland and a renegotiation of the protocol itself.

The EU has offered a package of measures designed to ease transit of goods to Northern Ireland.