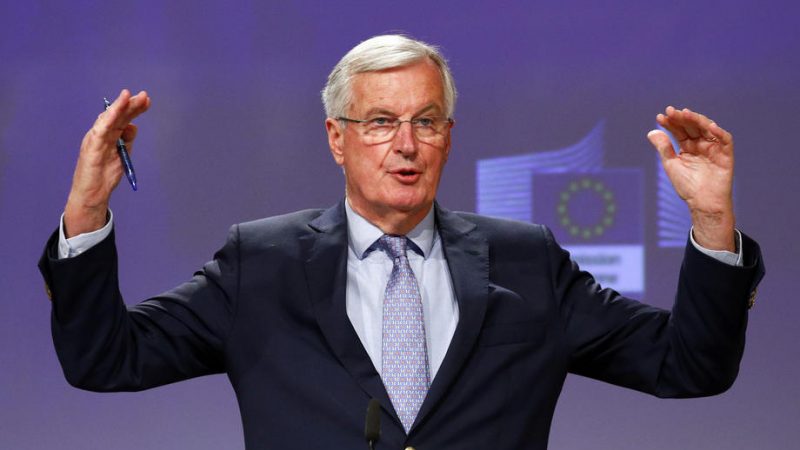 Talks on a post-Brexit trade deal between the EU and the UK appear to be on the brink of collapse after the chief negotiators from the two sides blamed each other on Friday (15 May) for the ‘stalemate’ at the heart of the talks.

In a statement following the third round of talks by teleconference this week, which involved around 250 negotiators on either side, UK chief negotiator, David Frost, expressed regret that “we made very little progress towards agreement on the most significant outstanding issues between us.”

The main obstacles to a deal concern fisheries and the EU’s insistence that the UK commit to maintaining a so-called ‘level playing field’ that would guard against either side seeking to undercut the other.

Frost described the EU’s demands as “novel and unbalanced”, adding that they would “bind this country to EU law or standards, or determine our domestic legal regimes, in a way that is unprecedented in Free Trade Agreements and not envisaged in the Political Declaration”.

Frost pinned the blame on the EU, commenting that “we very much need a change in EU approach for the next round”.

However, the EU’s chief negotiator, Michel Barnier, told reporters that the ‘level playing field’ requirements come from the Political Declaration agreed as part of the UK’s Withdrawal Agreement from the EU in January.

“This round has been disappointing,” said Barnier, repeating that “any trade deal has to be based on fair competition.”

“Apart from modest openings, the UK has not got into a real discussion on the level playing field, whatever they say.”

London has become frustrated by the reluctance of Barnier’s Task Force on Future Relations to compromise, and signalled that it will seek to cleave support from individual member states by publishing its negotiating texts next week “so that the EU’s member states and interested observers can see our approach in detail.”

However, with just one more round of talks, scheduled for the first week of June, before a ‘high -level’ meeting between Prime Minister Boris Johnson and Commission President Ursula von der Leyen in mid-June to decide whether an agreement is likely before December, the prospects appear slim.

“The agreement will structure our relations for decades to come,” said Barnier. “Our future partnership will be shaped by the choices we make this year together”.

With time rapidly running out, EU officials are privately warning that an extension will be needed to avoid a no deal scenario, a point which Barnier also alluded to.

However, the Johnson government insists that it will neither request nor agree to extend the post-Brexit transition period – during which the UK remains part of the single market – beyond December.

On fisheries, meanwhile, the two sides have been at loggerheads primarily over how much access EU fishing vessels should have to UK waters.

“Although we have had useful discussions on fisheries on the basis of our draft legal text, the EU continues to insist on fisheries arrangements and access to UK fishing waters in a way that is incompatible with our future status as an independent coastal state,” said Frost.

“It is hard to understand why the EU insists on an ideological approach which makes it more difficult to reach a mutually beneficial agreement,” he concluded.

For his part, Barnier conceded that the two sides’ positions on fisheries were “extremely divergent”.

“Without a deal on level playing field and fisheries, there will not be any possible agreement on our economic and trading partnership,” he added.

Pointing to remarks by UK Cabinet Office minister Michael Gove that London was prepared to give up on a ‘tariff-free quota-free’ deal if the EU insisted on its red-lines over level playing field, Barnier said that such a trading arrangement would be “anachronistic”

In any case, the EU would still require strong commitment to level playing field, he added.

“We are not going to bargain away our values for the sake of the British economy. It is not a nice have, it is a must-have.”