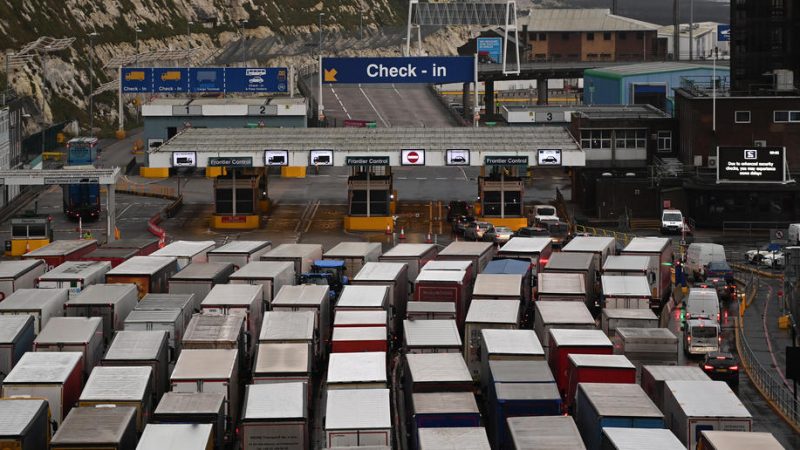 UK lawmakers have warned that “there is no guarantee” that the new international trade agreements being negotiated by ministers “will deliver actual economic benefits”, in a new report. [EPA-EFE/ANDY RAIN]

The EU-UK Trade and Cooperation Agreement, which came into force on 1 January, establishes a regime of tariff and quota free goods trade between the two sides after Britain’s departure from the European Union.

However, businesses now have to contend with customs checks which the EU imposed on UK exports on 1 January, while the UK has opted to phase-in the introduction of reciprocal measures until October.

The biggest drops in trade were with Ireland and Germany. Exports to Ireland fell by 47.3% between December and January, with the biggest decreases seen in the chemicals, live animals and food sectors. Under the Brexit deal, customs checks have been introduced on all goods transported from Great Britain to the island of Ireland.

In a statement accompanying the data, the ONS reported that the data was compared with the same quarter in 2018 because it was “the most recent period in which relatively stable trade patterns were observed”.

It also acknowledged that it was “difficult to fully detangle the impact the coronavirus and EU exit had on UK and international trade while they are still having an influence”.

Imports from Germany, the UK’s largest EU trading partner, dropped 30.5% or £1.7 billion over the same period.

Brexit minister David Frost has sought to play down the long–term impact of leaving the single market, remarking earlier this month that it was “striking that goods exports to the EU now exceed average levels from 2020.”

Ministers have also attributed some of the drop in trade volumes to the impacts of COVID-19 and to stockpiling by UK businesses in the EU ahead of the end of the transition period.

Most of the drop was registered in January when UK exports to the EU fell by 40.7% in January compared to December. Since then, trade volumes appear to have started to recover. In March, the ONS recorded that goods trade with the EU had increased by £1.8 billion compared to February.

However, businesses across a wide range of sectors have reported difficulties and delays resulting from the new checks and bureaucratic requirements.