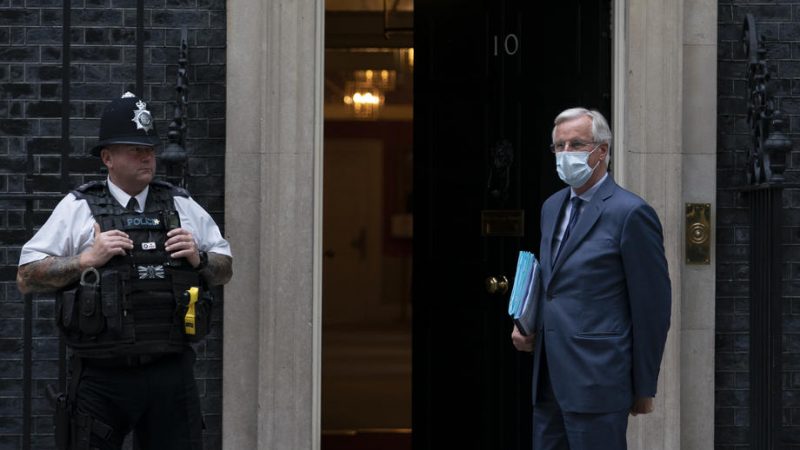 Speaking after the latest round of talks in London, Barnier said that “by its current refusal to commit to conditions of open and fair competition and to a balanced agreement on fisheries, the UK makes a trade agreement – at this point – unlikely.”

At an online press conference, Barnier said that the bulk of the round had focused on how to resolve the UK’s long-standing red lines, including the role of the European court of justice, the UK’s freedom to determine future laws, and a fisheries agreement.

He said: “We have tried to understand how these three red lines can be squared with our commitment to a comprehensive new partnership as set out in the political declaration signed by Prime Minister Johnson on 17 of October last year.”

However, Barnier again complained that the UK had failed to show sufficient willingness to meet the EU in the middle.

“Over the past few weeks, the UK has not shown the same level of engagement and readiness to find solutions respecting the EU fundamental principles and interests,” said Barnier, adding that “the time for answers is running out”.

The UK has earmarked September as its deadline for agreeing on a new trade deal with the EU, when its chief negotiator David Frost is due to take over as the UK’s national security advisor, and this timeframe now looks highly optimistic.

Frost took only a slightly less downbeat tone, conceding that “substantial areas of disagreement remain” and warning that “although we will continue energetically to seek an agreement with the EU, we must face the possibility that one will not be reached”.

“Considerable gaps remain in the most difficult areas, that is, the so-called level playing field and on fisheries,” said Frost.

Failure to secure a successor EU-UK trade arrangement will mean that trade will be conducted on World Trade Organisation terms from January.

Both sides have stepped up their ‘no deal’ planning in recent weeks, with the UK announcing plans last week to spend £705 million (€800m) on new infrastructure at its ports and border points to help smooth the flow of traffic after it leaves the EU single market.

An EU negotiating team will hold informal talks with their UK counterparts in London next week, with formal negotiations resuming on 17 August.

There are, however, some signs of compromise elsewhere. Frost hinted that the two sides were closer to resolving their differences on the role of the European Court of Justice, and that there had been progress on dispute settlement and governance.