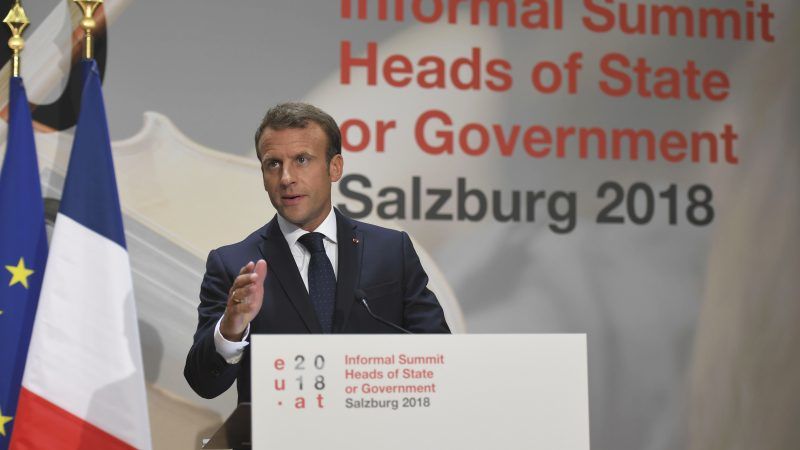 “Yes, there is a crisis and tensions surrounding migration,” acknowledged Macron as he held his final press conference at the end of an informal EU summit.

“But who generates them? Those who are telling us I don’t want to stick to humanitarian law and international maritime law and refuse to let boats dock on its ports,” Macron said.

“Those who are telling us I am part of Schengen, I love Europe when I can benefit from the structural funds, I love Europe when it gives me money, when it generates prosperity to my people, when it allows my workers to make a better living in neighbouring countries, but at home, I will not allow one single migrant, one single refugee into my country,” he continued in a clear reference to Italy’s Matteo Salvini, Hungary’s Viktor Orban and the Visegrad Four.

These people do not respect any rules, they are the ones creating mayhem, not the rest of the community, he insisted and added that Europe is no ‘menu à la carte’.

The French president sent a strong and clear warning: “Countries that are showing no solidarity will eventually have to leave Schengen and they will no longer benefit from financial aid (structural funds).”

Commenting on the dispatching of migrants between member states else known as ‘burden sharing’, Austria’s Chancellor Sebastian Kurz insisted on the willingness of the country to focus on strengthening Europe’s external borders and the Frontex mandate

But the question of ‘burden sharing’ remained unsolved with some member states such as Austria rejecting it while Greece, France and Germany are among those pushing for it.

“What we must strive for is to make sure that less people are leaving for Europe illegally through the Mediterranean sea. This can be done by building strong partnerships with North African countries and Egypt,” said Kurz, adding that Egypt was efficient in fighting illegal migration.

Commenting on the Brexit negotiations, Tusk said he was a little more optimistic by the summit end than a few weeks ago.

“But I can’t rule out the possibility of a no deal. We are not ready to compromise on our four freedoms, on our single market as well as on the Irish borders,” he insisted.

He said that an additional summit will be held in Brussels on 17-18 November in order to finalise the Brexit agreement should no substantial progress been made at the next EU Council meeting mid-October.

As for European Commission Jean-Claude Juncker, he said that that the EU executive has prepared ‘in detail’ for a ‘no deal’ Brexit, “so be happy, don’t worry”.

“We must defend the single market and its coherence. The Chequers plan cannot be a take it or leave it plan,” he stressed.

The French president insisted that the EU strategy will not change.

Asked about the Eurosceptics and critics, he replied with a question: “Who put us in this Brexit situation? The same persons who are today telling you that Europe is going from crisis to crisis”.

“Brexit is the choice of the British people pushed by those who predicted easy solutions. Brexit is telling us one thing: it is demonstrating that those who want to explain to us that one can do without Europe easily, that it will go very smoothly and that it will bring a lot of money are liars,” said Macron.

“These people left the next day so that they didn’t have to manage all this.”

Less than an hour after the Salzburg summit ended, AFP quoted Theresa May as saying that she will unveil new Irish border plan “shortly”.