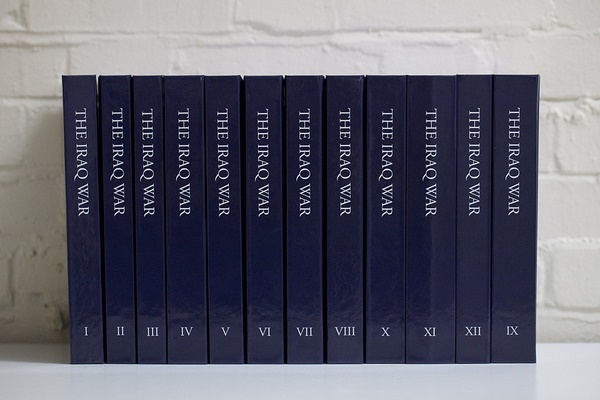 The Iraq War: A Historiography of Wikipedia Changelog [STML/flickr]

The European Parliament has called for the Chilcot Report into the Iraq war to be published “without further delay”.

The Chilcot inquiry was launched by the UK government in 2009, but has run into many delays and is unlikely to be published before the UK general election in May. Sir John Chilcot, who is chairing the inquiry, has said he does not know when the report will be published.

“This is an issue central to our country’s foreign policy; the public deserve to know the truth before they cast their vote at the General Election.”

The report was initially delayed over the issue of the publication of correspondence between Tony Blair and George Bush.

This has subsequently been resolved, and the inquiry has embarked on a process of “Maxwelisation” which gives those who are criticised in the report the right to reply before final publication.

Some responses have run into the hundreds of pages.

The call for publication was made as part of amendments to a European Parliament resolution on the CIA’s alleged torture programme. Further amendments also called for a full inquiry into allegations that CIA interrogations took place on the British territory of Diego Garcia.

“Evidence from Chilcot could also be vital to wider investigations being undertaken across Europe into governments’ complicity with the CIA’s torture programme,” said Bearder.

MEPs from the Labour Party (Socialist & Democrats), who were in power at the time of the Iraq war, voted in favour of the amendments. Conservative MEPs (European Conservatives and Reformists) voted against, stressing the need for the inquiry to remain independent of both the UK and European Parliaments. The UK Independence Party (UKIP) abstained from voting altogether, despite their numerous calls for the report to be published. UKIP said the party never votes “to empower the European Commission to make demands on the UK”.

In 2006, a temporary European Parliament committee was set up to investigate the complicity of EU national governments with the illegal torture and rendition of terrorist suspects. The European Parliament’s civil liberties, foreign affairs and human rights committees with now resume this inquiry, taking stock of all relevant evidence and ongoing parliamentary and judicial inquiries.

Liberal Democrat Foreign Affairs Spokesperson Tim Farron said it was time for the US government “to come clean” about what happened on Diego Garcia.

Diego Garcia is a British Indian Ocean Territory, which has been implicated in the rendition and torture of terror suspects.

“Britain represents the values of order, tolerance and justice. The UK government should never, ever have allowed our territory to be used in the process of rendition.

“But more than that, the recent news that Diego Garcia might have been involved in the CIA torture programme is another revelation that has been denied, repeatedly, for the last decade.”

“Either the US government lied to us, or the previous government covered up what they knew.”