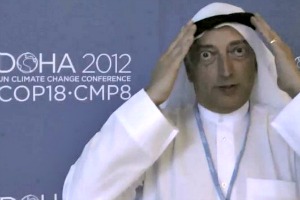 EXCLUSIVE / An ex-UK Independence Party (UKIP) MEP says that the party’s climate change scepticism was callow and so eccentric that party press officers often had to contradict the views of its climate spokesman, Lord Monckton.

“The policy was very rudimentary and their [climate change] position was very amateurish,” said Marta Andreasen, who left UKIP to join the Conservatives in February.

"Climate change is not a reality for UKIP,” she added.

As well as advocating a UK withdrawal from the EU, UKIP contends that global warming is an unproven hypothesis leading Europe to disaster, and that "fossil fuels are the future".

The party’s former environment spokesman in the European Parliament, Godfrey Bloom, lists a shareholding with the oil and gas company Shell in his members declaration of financial interests, although this only amounts to £3,000, he told EURACTIV.

An ardent opponent of green politics, Bloom has condemned Greenpeace for forcing Shell to scrap plans to dispose of the Brent Spar oil storage tanker at sea. In 2010, he was filmed congratulating the French security services for blowing up the Greenpeace ship the Rainbow Warrior 25 years before.

But Andreasen said that she doubted whether UKIP had received any funding from the energy intensive sector, and UKIP too denies this. “If they really had somebody financing this, they would have done it better,” she told EURACTIV.

“The typical [people] dealing with climate change were the MEP Godfrey Bloom and Lord Monckton, who was seen even within the UKIP as eccentric,” she added.

Monckton famously dressed up as a Bedouin and occupied Burma’s seat at the UNFCCC climate summit in Doha last year. He lectured delegates about the lack of global warming in the last 16 years for about a minute before being ejected and banned from future UN summits for life.

“More than once I saw people internally – even the press office – contradicting what he was saying,” Andreasen continued. “Godfrey Bloom also used to scream and shout in the [European Parliament] plenary about the nonsense that climate change represented.”

Bloom’s environment spokesman post for UKIP was recently taken up by Roger Helmer who, in 2009, accused the Church of England of having "abandoned religious faith entirely and taken up the new religion of climate alarmism instead".

But Bloom, a financial economist by trade, is still a substitute member of the European Parliament’s environment committee, and an influential voice on climate policy within UKIP, which currently polls 17% in British voting surveys.

Contacted by EURACTIV, he dismissed Andreasen’s depiction of UKIP climate policy as “one of her usual rather wild accusations”.

“She has never expressed any position on climate change in all the years she’s been with us so I am not sure where she’s coming from,” he said.

A matter of fact

Bloom argues that the EU’s “disastrous” shift to renewable energy endangers the security of electricity supplies, and calls for a Royal Commission to examine climate science.

“It became clear in 2005 that the world was not warming and we have been monitoring it closely ever since,” he said. “There are no independent scientific institutes in the world which have not conceded that there has been no global warming for 15 years. That’s a matter of fact, not opinion.”

“Even the IPCC [the UN Intergovernmental Panel on Climate Change] has conceded this,” he added. “I think the Met Office has pretty well endorsed what we’re saying too.”

However, Kevin Trenberth the lead author of the 2001 and 2007 IPCC scientific assessments on climate change told EURACTIV that the panel had not made any statement on global warming over the last 15 years. A draft IPCC report to be published next year though would contain “multiple statements” reflecting global warming in that period, he said.

After installing a new computer model in January, the UK’s national weather service did round downwards a global temperature projection for the period up to 2017 by 20% – from 0.54C, to 0.43C above the long-term average.

However, “this means temperatures will remain well above the long-term average and we will continue to see temperatures like those which resulted in 2000-2009 being the warmest decade in the instrumental record dating back to 1850,” a Met Office news release said. Its analysis was backed by the World Meteorological Organisation.

Even so, surveys indicating that at least 97% of scientists attribute global warming to greenhouse gas emissions should not be used to silence dissenters, Bloom says, citing the 16th Century scientific consensus against Copernicus.

Climate scientists though, say they are not convinced by this analogy, especially when Bloom also attributes last year’s record Arctic sea ice melt to “a natural cycle which has grown and receded over the years.”

“We regard this as not unusual in the weather cycle over the last 8,000 years,” Bloom said.

“There is no evidence for natural cycles doing that,” Trenberth responded. “And there still has to be a source of energy to melt the ice. As scientists we know that this is associated with global warming and changes in the composition of the atmosphere. What he is saying is utter nonsense.”

Much of the scientific underpinning for UKIP’s climate scepticism comes from Ben Pile, a part-time researcher, who contributes to the contrarian Spiked journal, and runs an anti-environmental blog called Climate Resistance.

A Guardian blog investigation raised questions about the source of Pile’s £2,000 a month salary after documents submitted to an appeal against building wind turbines in North Devon, which is not Bloom’s constituency, claimed that he was contracted to the Europe of Freedom and Democracy (EFD) Group.

Bloom said: “He is on my staff and my website and his wages are paid as part of my secretarial research allowance. That is the reason – or one of the reasons – why I’m significantly better informed on this subject than most MEPs.”

“I am certainly not an amateur,” he said.

But a small band of sceptics contend that there may be no warming beyond normal climatic variations and/or that solar activity could be responsible for empirically demonstrable climate change.

Environmentalists say that such positioning has often been advanced by researchers with funding links to sources such as the Charles G Koch Foundation, Exxon Mobil, and the American petroleum Institute.