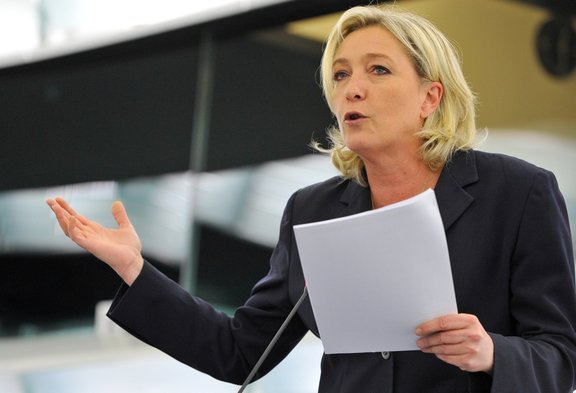 Europe's far-right parties have aligned themselves with the British Conservative Party, announcing they will not present a common candidate for the European elections, but still intend to create a parliamentary group in Strasbourg after the May vote, EURACTIV France reports.

Under the umbrella of the European Alliance for Freedom, the French National Front (FN), the Austrian Party for Liberty (FPÖ) and the Belgian Vlaams Belang (VB) hope to lay the foundations for the creation of a far-right grouping at the EU level.

“We thought about the possibility of presenting a candidate for the European elections,” MEP Franz Obermayr from the FPÖ admitted at the press conference, saying there was no lack of “charismatic leaders” in far-right parties in Europe, such as Marine Le Pen in France and Dutch Geert Wilders in the Netherlands.

However, “we will not do it for democratic reasons,” the Austrian MEP claimed.

Their reason for refusing to present a common candidate may appear puzzling at first. Indeed, for the first time, the Lisbon Treaty allows the European Parliament to have a say on the election of the European Commission president, a major democratic breakthrough for the EU, according to many observers.

The far-right are far from being isolated in their fight. With their announcement, they have aligned themselves with the European Conservatives and Reformist (ECR) group, which is dominated by the British Conservative Party of Prime Minister David Cameron.

Last month, the ECR announced it would not present a common candidate, saying it refuses to validate the idea of a European electorate. Presenting a common candidate would be tantamount to "setting up a government where there is no nation,” the Conservatives argued.

"We don't aspire to have a common manifesto, and we will not play the game of pretending that there is a European electorate," said Daniel Hannan, a British Conservative MEP who is also secretary general of the Alliance of European Conservatives and Reformists (AECR).

Unsurprisingly, far-right parties are set to focus on national issues during their European election campaigns.

“We need to deal with what is going on in our country before moving to others,” Obermayr said.

“The restoration of the sovereignty of the member states is a priority at these elections,” Philip Claeys added. Other priorities include halting negotiations with Turkey, and controlling member states’ borders.

“But the more things progress, the more our vision is common,” Marine Le Pen stated.

The establishment of a far-right parliamentary group in the European Assembly remains at the top of the agenda for the three far-right leaders. In order to do so, they will need to gather at least 25 MEPs from at least seven EU member states.

“On the establishment of a parliamentary group, it is difficult to move faster,” the FN president explained, adding she hopes to get 20 seats after the elections.

According to the latest estimates by Poll Watch, the FN is set to obtain 20% of French votes, or 18 seats in the European Parliament. Austria's FPO receives 22.5% of voting intentions (4 seats) while Belgium's VB could get 4.6%, or one seat.

But not many supposed “like-minded” parties were ready to join the initiative, and UKIP, the most vocal Eurosceptic party in the EP, rejected the proposition outright.

Eurosceptic political parties are blossoming in many European countries, but their backgrounds and causes are very different. Analysts have argued that even though the next Parliament could have a much higher number of eurosceptics, even populist MEPs, they have a smaller chance of forming a coherent bloc.