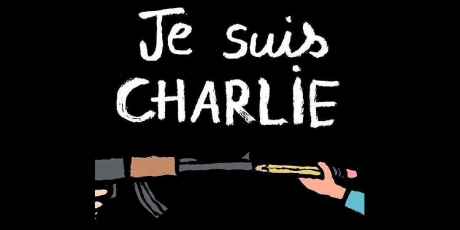 The Charlie Hebdo murders have sparked an outpouring of grief and defiance. [H.KoPP/Flickr]

In an interview yesterday with Fox News, Farage said there was a “fifth column” at work in many EU countries. The term was coined during the Spanish Civil War and refers to a group of saboteurs living within a society, or besieged city, that secretly tries to undermine it from within to help an external enemy.

“Let’s be absolutely frank and honest about this, we now have in many European countries […] a fifth column living within our own countries […] people, mercifully few in number, but people who are out to destroy our whole civilisation and way of life,” Farage said on the US news channel.

On Wednesday evening, he made the same point on the UK’s Channel 4 News. “We’ve got people living in these countries, holding our passports, who hate us,” he said.

His comments were criticised by Prime Minister David Cameron and other UK politicians. Ten journalists and two police officers were slain in the attack on the newspaper, which has run cartoons lampooning the prophet Mohammed.

“With the appalling events in Paris yesterday still so fresh in people’s minds, with people still struggling for their life who have been injured, I think today is not the day to make political remarks or political arguments,” Cameron said yesterday afternoon in Manchester.

“As countries in Europe we share certain values that we think are not incidental to our success […] those values include freedom of speech, the right to disagree, the right to argue in public, the right to have government under the rule of law, the right a tolerant society with a strong democracy. Today is the day for those arguments,” he said.

Home Secretary Theresa May, a Conservative, said it was “irresponsible to talk about a fifth column”.

“To imply that British Muslims, who I know are fervently British yet also proud of their Muslim faith, are somehow part of the problem not part of the solution is grabbing the wrong end of the stick,” Clegg said.

On Channel 4, Farage called for “full checks on everybody”, who migrates to Britain as part of a “controlled immigration policy”.

Asked by anchorman Jon Snow if Europe should bind together at a time like this, Farage disagreed.

“It doesn’t say we should be part of a political union. Yes, there are shared values of cultures […] but that doesn’t mean we should be one state,” he said.

Immigration is a hot topic in the run up to the UK’s national elections in May this year. That poll will have direct consequences on the UK’s relationship with the EU.

Cameron, who is pushing for stricter control on immigration within the EU as part of a series of reforms, has promised voters a referendum on the UK’s EU membership if his Conservative party are elected.

On Wednesday, he met German Chancellor Angela Merkel in London.  Cameron’s desire for immigration controls would breach the EU treaty right of freedom of movement.

Cameron has said he will campaign for the UK’s to stay in the EU, if he wins the reforms he wants. Merkel has said she is ready to go some, but not all the way, towards meeting his demands.

But Cameron is under significant pressure to be tougher on Europe, and immigration, after UKIP triumphed in the European elections. Since then, UKIP, which wants to take the UK out of the EU, has beaten Tory candidates in two high-profile by-elections.

The Daily Telegraph reported yesterday that the UK media regulator Ofcom had decided that UKIP would be classified as a “major party” for the election. It means UKIP is guaranteed airtime, during the campaign, for two party election broadcasts on commercial radio and television broadcasters for the first time.

It puts UKIP on the same footing as the other national parties, formally endorsing an era of four party politics in the UK, the Telegraph said.

It will also up pressure on major broadcasters to give Farage a place in televised leaders’ debate. The UKIP leader famously bested Nick Clegg in a televised debate over the EU, last year.

Farage, an MEP and leader of the European Parliament’s Europe of Freedom and Direct Democracy, said EU governments’ biggest mistake was promoting multiculturalism.

“We have said to large numbers of people: ‘you can come here from any part of the world. By the way please don’t bother to learn our language, don’t integrate in any way at all. You can take over whole parts of our towns and cities and we will say it has made us a wonderful diverse nation,’” Farage told Fox.

“We come from countries with Christian cultures and Christian constitutions and it’s about time we started standing up for that,” he added.

“That does not mean that the vast majority of Muslims living in Britain, France, Germany and America are not law-abiding and peaceable, and really good human beings,” he said.

Farage predicted that profiling of Muslim communities, as part of anti-terror operations would be less controversial as a result of the attacks.  Terrorism in Europe would be a problem for years to come, he added.

EU leaders have condemned the attacks, and all three major European institutions held a minute’s silence at noon, in memory of the victims.

The UK Independence Party was the most successful British party in the European elections. The Eurosceptic party is now looking to build on that success, adding to the pressure on Prime Minister David Cameron ahead of May's national election.