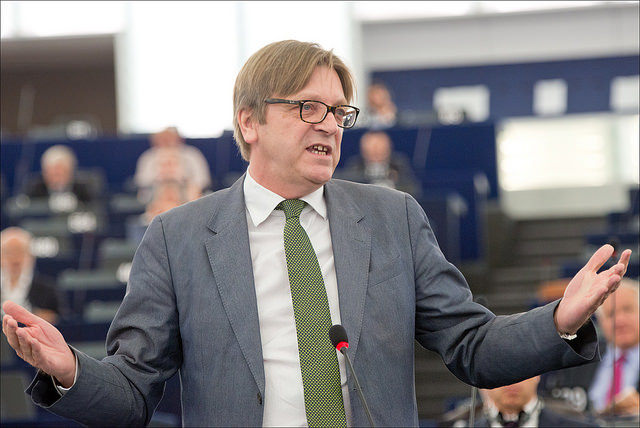 Verhoftstadt, the leader of the ALDE liberal group in the Parliament, has often clashed with the United Kingdom Independence Party chief, who is soon to step down.

Farage told euractiv.com, “I can’t think of a man more insulting towards the British, our standing in the world, or even the concept of nation state democracy.

“I am convinced that with Verhofstadt in charge that EU exit will happen more quickly than I originally thought.”

He added, “They just could not have picked a human being more negative to what we are trying to do. In the European temple of federalism, he is the high priest. And people like me are not worthy.”

Verhoftstadt was appointed by the Parliament’s Conference of Presidents.  MEPs will need to approve the eventual agreement on the deal to take Britain out of the EU.

Before that can happen, article 50 of the EU Treaty must be invoked. Verhofstadt has urged Britain to trigger the clause as soon as possible but the UK has said it is unlikely to do so before next year.

Verhofstadt has lashed out at Farage in the past, branding him the biggest waste of EU money ever during one debate.

He also described the Brexit referendum as “a glorified cockfight” between Farage and now Foreign Secretary Boris Johnson.

Former Belgian Prime Minister Verhofstadt, who wants a United States of Europe, was famously blocked from being European Commission President by the UK.

He was recently called a “wanker” during a European Parliament session by Syed Kamall, the Brexit-supporting head of the Tory-led European Conservatives and Reformists Group.

Kamall today said, “If the Parliament wishes to appoint a Brexit negotiator then it must be a decision made by a majority of all 751 MEPs, and the person and persons to fulfil the role must be voted on by the full Parliament.

“It is not right that the President and a couple of men sitting in a back room can decide everything and foist it on the democratically elected representatives.

“If the parliament thinks that Guy Verhofstadt is the right person to represent it in the negotiations then that’s fair enough, but these backroom stitch-ups are disrespectful of the 747 other MEPs and their voters.”

Verhofstadt’s appointment, alongside the Commission’s choice of Michel Barnier as its Brexit point man, shows that two of the EU institutions are taking a tough stance towards the Brits.

Barnier was infamously described as the “Scourge of the City of London” by the British media when he was Internal Market Commissioner.

Honour to be appointed as lead #Brexit negotiator for @Europarl_EN, which will play central role Art 50 deal + any future EU-UK agreements.

'Scourge of the City' to return to Brussels in October

Michel Barnier will return to Brussels on 1 October to take up his new position as the EU’s “negotiator-in-chief” with the United Kingdom. EURACTIV’s partner La Tribune reports.