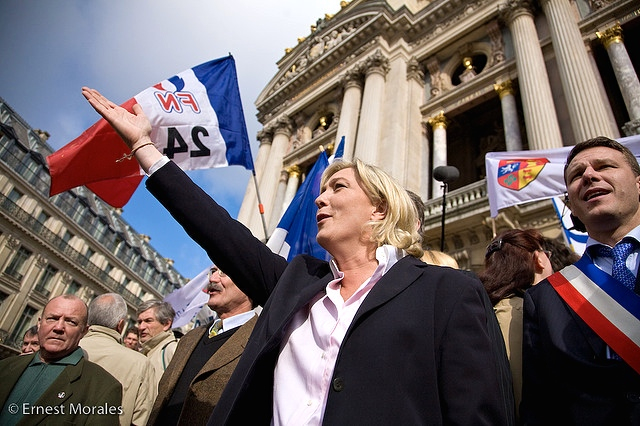 “My idea is to tell the French people that if they elect me,” in 2017, “six months later there will be a referendum,” Marine Le Pen told Greek TV channel Mega.

In 2013, British Prime Minister David Cameron pledged a vote on his country’s EU membership if he is re-elected at the 7 May election. He initially said that the referendum will be in 2017, but recently stated that he wants to bring it forward.

Several opinion polls predicted victory for Le Pen’s surging anti-EU and anti-immigration FN in Sunday’s local elections, through her party finished second, but with its highest ever vote. The French rightist is hoping to carry the momentum forward to a successful run for the presidency in 2017.

“The European Union is death, the death of our economy, our social welfare system and our identity,” she said in the interview broadcast Monday.

Le Pen also called on Greece to negotiate its own exit from the eurozone, rather than submit to the demands of its creditors and Brussels. She said she welcomed the election of the leftist Syriza party to office in Greece after January’s election.

“[Greece’s] only solution is to negotiate an organised exit from the euro,” she said. “As long as the government tells the Greek people they can remain in the eurozone while fighting against austerity, it will at worst be lying and at best wrong.”

She predicted that if Greek Prime Minister Alexis Tsipras submits to creditors’ austerity demands, he will pay for it with his popularity ratings.

“The Greeks need their currency back,” Le Pen said.