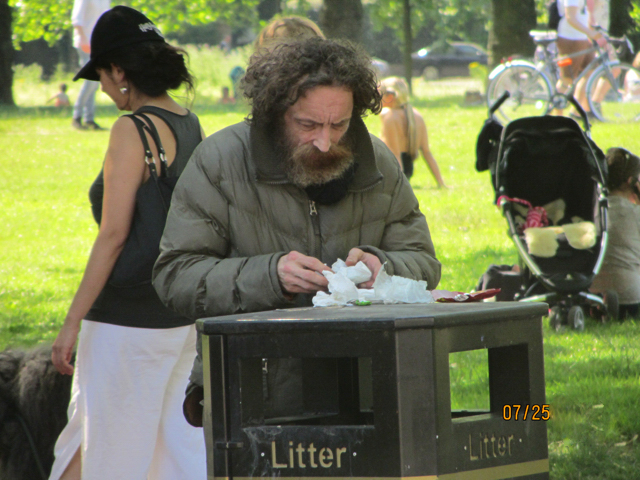 Clutching a bag of pasta, canned pears and beef, David Kirk leaves a food bank in one of Britain’s poorest corners — his sixth visit in a few weeks.

“It’s certainly a big help,” the tattooed 54-year-old said as he loaded the free supplies into his car in the town of Camborne.

“My wife has been diagnosed with cancer and I’m not able to work at the moment,” Kirk said.

The growing numbers of Britons turning to food banks run by charities to get by has become a key political issue weeks from the 7 May election.

The first question thrown at Prime Minister David Cameron in a prime time television grilling on Thursday was about how many food banks had sprung up during his five years in power.

Cameron parried, saying his government had created jobs to lift people out of poverty and rejected the idea of a “broken Britain”.

But the reality looks different at a food bank in the backroom of a church in Camborne on a peninsula famous for its beaches, holiday homes and rich history.

It is less known for being one of the country’s poorest regions, with average wages of around £14,300 (20,000 euros) a year — five times lower than in London, according to European Union data.

‘You’ve got to feed them’

Near a piano covered with a blanket and old Bibles, volunteers fill bags with vegetables, tea, rice and other staples.

Nicola Bacca, 32, came with her daughter and said her benefits had been cut “through no fault of our own”.

“That left us with very little money,” said Bacca, who has four children and complained that all of her money was used up paying bills.

“Food is the final thing on the list and with four children? You got to feed them.

The Camborne food bank opened in 2009 in the wake of the global financial crisis.

But rather than becoming less frequented as the economy has strengthened, the opposite has happened, according to its 70-year-old founder Don Gardner.

A former tin-producing town, Camborne has never truly recovered from the closure of its mines — their remains still visible under encroaching vegetation.

The poverty here is no anomaly.

Britain has at least 850 food banks and more and more are opening every year, according to a parliamentary inquiry into hunger in the country released last year.

>>Read: Eurostat: One out of four EU citizens at risk of poverty

“The situation is an issue of concern,” Alison Inglis-Jones, a spokeswoman for the trust, told AFP.

“There has been an increase in number and use of food banks over the last 10 years,” she said.

Inglis-Jones said food banks were cropping up around the country, including in London, the wealthy capital.

The parliamentary inquiry found the reasons to be mainly the 47 percent rise in food prices between 2003 and 2013, and a 30.4-percent increase in housing costs, which salaries have failed to keep up with.

But there is also the austerity policies applied by Prime Minister David Cameron’s government, which has cracked down on welfare to bring down the country’s spiralling public deficit.

“There has been a change in the political culture in the UK from anti-poverty to anti-poor,” economists Joanna Mack and Stewart Lansley wrote in their book Breadline Britain: The Rise of Mass Poverty.

“This toughening stance against the poor has been used to roll back the state and to justify a succession of deep cuts in benefit levels,” they said.

Ed Miliband, leader of the main opposition Labour party, has accused Cameron of creating “a country founded on rising inequality”. Cameron has responded by saying that his government is “lifting people into work and out of poverty”.

But in Cornwall, the political debate sounds far away.

“Nobody cares about us. We are a forgotten area,” said Gardner as he drove his battered old Renault car through the grey streets of Camborne, pointing to all the shops that have shut down in recent years.

“The economic downturn was like coffin nails but we were already in the coffin.”