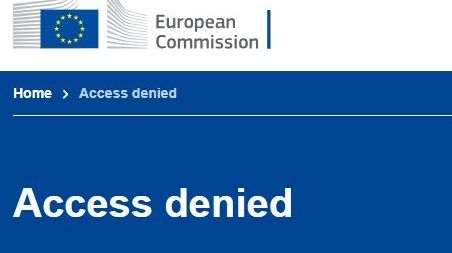 With just 100 days until Brexit on Wednesday (19 December), the EU’s executive cautioned that most banking, insurance and other financial firms in Britain would be cut off from the European Union if there is no divorce deal.

No deal means there would be no transition so the exit, set in law as 2300 GMT on 29 March 2019, would be abrupt. Bank of England Governor Mark Carney said leaving the EU with no transition could be akin to the 1970s oil shock.

With fears growing that the political brinkmanship in London could lead, as May has warned, to Britain leaving without a deal, businesses and the EU’s executive ramped up planning for such an eventuality.

“Businesses of all sizes are reaching the point of no return, with many now putting in place contingency plans that are a significant drain of time and money,” the heads of Britain’s five biggest business lobby groups said.

"Absolute katastrophe"
Juncker (In German) on the UK leaving with a no-deal.

That's why the EU has contingency plans. 100 days to #Brexit pic.twitter.com/4rDWjnc3Hy

The world’s biggest corporates, ranging from Apple AAPL.0 and Toyota to J.P. Morgan and Goldman Sachs, have cautioned that Brexit could complicate their businesses.

The euro notched up its biggest daily rise against the pound in more than a week on Wednesday.

“The government is playing a very hardball game … as it delays the Brexit vote until the New Year, which is curtailing the debate over May’s plan and effectively giving little time for alternatives to be found,” Scotiabank said in a note.

May has delayed a vote on her deal until mid-January, prompting some lawmakers to accuse her of trying to force parliament into backing her by running down the clock as the March 29 exit day approaches.

The European Union set out short-term measures to limit disruption to air traffic, financial services and trade if Britain left without a deal.

We have started implementing our #Brexit “no deal” Contingency Action Plan.
It includes 14 specific, temporary measures in a limited number of areas such as financial services, air transport customs and climate to avoid major disruption for the EU27 → https://t.co/wMTRcj5MZD pic.twitter.com/Ur6lqZjmXH

Every shipment of live animals or animal products from Britain would face controls at EU borders and Britons would lose the right to travel with their pets using EU pet passports.

Pro-Europeans fear Britain’s exit will weaken the West as it grapples with Donald Trump’s unpredictable US presidency and growing assertiveness from Russia and China. They say it weakens Europe’s economy and removes one of its only two nuclear powers.

Brexit supporters say while there may be some short-term disruption, in the long-term the UK will thrive outside what they cast as a doomed experiment in German-dominated unity and excessive debt-funded welfare spending.

Without a deal, the United Kingdom would trade with the European Union under World Trade Organization terms.

But without a transition, London – which ranks alongside New York as one of the world’s top two global financial centers – would be cut off from the rest of the EU.

About six trillion euros, or 37%, of Europe’s financial assets are managed in the UK capital, almost twice the amount of its nearest rival, Paris.

The British government set out the biggest overhaul of its immigration policy in decades on Wednesday, ending special treatment for European Union nationals while promising to give businesses time to adapt to its post-Brexit plans.

Ironically, when I click on the link in the @EU_Commission press release to see details of how Brits will be treated in the EU after Brexit, this is what I get https://t.co/AHlFmVgOkj pic.twitter.com/ypIPzidk01