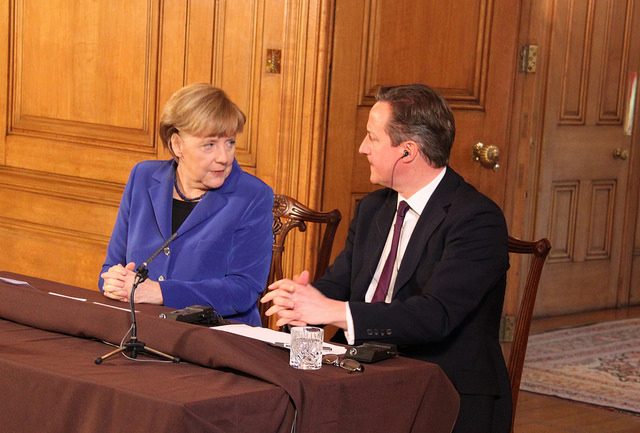 German Chancellor Angela Merkel has warned Britain’s David Cameron that putting limits on immigration from other European Union nations would be a “point of no return” that could sharply increase the risk of Britain leaving the EU, a magazine said.

The respected weekly Der Spiegel, citing unnamed sources in Merkel’s office and the German foreign ministry, reported on Sunday (2 November) that Merkel was becoming worried for the first time that a British exit from the EU – dubbed “Brexit” – was a real possibility.

Under growing pressure from the anti-EU UK Independence Party (UKIP) ahead of a May 2015 national election, Cameron’s Conservatives have said they would try to cap immigration from the rest of the EU if re-elected.

Both Merkel and the European Commission in Brussels have said this would violate a fundamental EU principle that allows citizens of the bloc to live and work in any member state.

Spiegel cited sources in Berlin saying that if Cameron does insist on limiting the number of immigrants from other EU states, “there will be no going back”.

“Should Cameron persist (in this plan), Chancellor Angela Merkel would abandon her efforts to keep Britain in the EU. With that a point of no return would be reached,” it quoted the sources as saying, adding: “That would be it then.”

There was no suggestion that Germany, the EU’s biggest economy and most powerful member, would itself push Britain towards the exit. Merkel has said she strongly backs continued British membership of the 28 nation bloc, but not at any price.

No member state has ever left the EU, though the bloc’s Lisbon Treaty does contain a legal mechanism for a country to do so if it chooses. Other member states cannot force it out.

Merkel tried to convince the British premier at the last EU summit not to put limits on the number of EU citizens allowed to work in Britain, Spiegel said, but subsequent comments by British officials suggested her warning had fallen on deaf ears.

Cameron has said he will hold an in-or-out referendum on EU membership in 2017 if he wins the May election. He has said he wants Britain to remain inside a reformed EU, but it is far from clear the reforms he wants will be accepted by other members.

Britain’s Sunday Times reported last month that Merkel was open to talks with Cameron on possible restrictions for migrant EU workers bending the rules to claim welfare benefits inappropriately in other countries in the bloc – a key concern for many British voters.

“On the other hand, we must not interfere with the fundamental principles of free movement in Europe,” it quoted Merkel as saying.

Large numbers of people from eastern Europe, especially Poland, have moved to the UK since their countries joined the EU from 2004.

Supporters of EU enlargement in Britain and elsewhere say they have given a big boost to the economy. Critics say they have put great strain on local services such as health, housing and education.

Chancellor George Osborne dismissed the story as speculation about how Germany may react to a future UK policy shift, but said the government would act in the national interest in addressing public concerns about immigration.

He told the BBC Breakfast programme today (3 November) that concerns about abuses of the benefit system were causing “great unhappiness” but the UK would approach future negotiations in a “calm and rational” way.

“If you’re going to have a sensible single market, if we want to compete with the Americans and the Chinese and so on, we need the free movement of labour,” he told BBC’s Sunday Politics.

A spokesman for Mr Cameron said that he would make a speech on immigration before Christmas, and stressed “you can be sure he will always put Britain first.”

Meanwhile The Sunday Times reported yesterday that Cameron was seeking to ban only jobless migrants and deport them after three months if they could not support themselves in a bid to satisfy Berlin.

The newspaper claimed the prime minister’s planned speech, about beefing up immigration policy, will focus on stretching EU rules “to their limits” so the measures are more likely to be tolerated by Angela Merkel, the German chancellor.

Senior ministers say Cameron wants to present plans to renegotiate Britain’s relationship with Brussels that are “German-compliant”, the newspaper said.

They say he will seek to “square” Merkel before he makes his speech this year on curbing immigration.

11 responses to “Germany will accept Brexit if Cameron limits immigration”