Get out, and go quick: Brexit heartland stays defiant 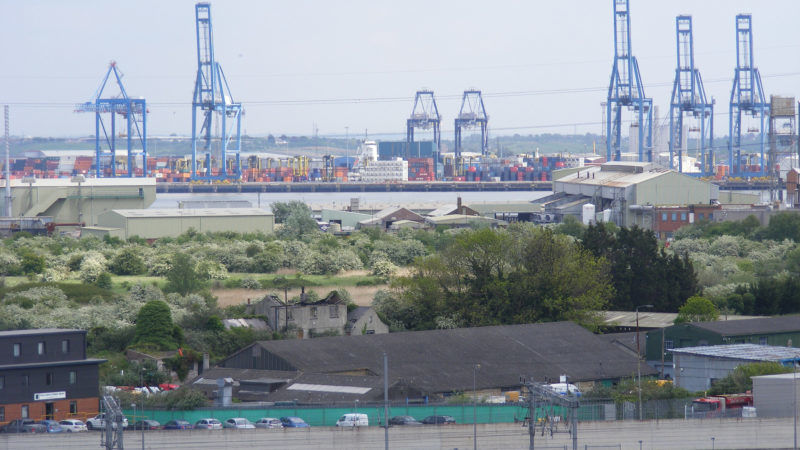 Tilbury, in South East England, had the fourth-highest Leave vote in the Brexit referendum. [Sludge G]

In the rundown dock town of Tilbury on the eastern outskirts of London, backing for Brexit remains rock-solid, with uncompromising voters wanting Britain to get out of the EU, and get out fast.

The British summer political break has been filled with talk of London softening its “hard Brexit” stance, seeking transitional arrangements after the UK leaves the European Union in March 2019.

But in this bastion of Brexit support in southeast England, the sooner Britain quits, the better.

“I hope they pull us out completely because that’s what we voted for,” said David Cunningham, 65.

“Get on with it. The longer you drag it out, the harder it’s going to be to cut the cord.”

As Britain and the EU prepare for another round of negotiations starting on Monday (28 August), the retired car builder said he wanted “an independent Britain, back to the days when we could trade with everybody.

“I like the continent. But the common market wasn’t working. If it’s not working, get out.”

Around 35 kilometres east of central London, on the River Thames estuary, Tilbury is known for its docks and the 17th-century fortress built to protect the capital from naval attack.

The 12,000-strong town grew up around the 1880s docks, which remain one of Britain’s main container ports.

Its street names evoke old imperial destinations such as Sydney, Bermuda and Calcutta, but Tilbury itself looks timeworn.

In the June 2016 referendum, of the UK’s 382 voting areas, the local Thurrock borough had the fourth-highest vote to leave the EU, at 72.3%.

‘Got to get out somehow’

“We should have stayed with the Commonwealth,” said Derek Howard, 77, a retired joiner drinking tea from a polystyrene cup.

Describing the area as “a bit run down” with “a lot of unemployment”, he said local people wanted the money going to Brussels spent on British health care and welfare.

He said talk of paying billions of pounds to leave the EU was “ridiculous” but worth paying “if that’s what it takes”.

“We’ve got to get out somehow,” he said.

While Britain seeks post-2019 transitional agreements, a nationwide YouGov poll this month found no softening of resolve on Brexit among Leave voters.

It found 61% think “significant damage to the British economy to be a price worth paying” for leaving the EU.

Some 39% of the 2,043 respondents polled last month thought likewise for themselves or a family member losing their job.

Standing near a war memorial in Tilbury’s Civic Square, 42-year-old Darren said mass immigration was a key factor in his Leave vote.

“They’re doing our jobs. There’s a lot of jobs out there. If a lot of these people left, it would work out better for us,” said the unemployed man, who declined to give his surname.

“I think this country’s overrun. I think they need to get out. It’s not a British country any more. It isn’t.”

Carrying a bent sink he hoped to sell for scrap, he said Brexit was the “best thing that’s ever happened”.

Tilbury Docks was where the first wave of Caribbean immigrants arrived in 1948 on the Empire Windrush, which became shorthand for post-war black immigration.

“A lot of people thought that people from other countries apart from the EU would be slung out – especially round here. But that’s not going to happen,” said Jackie Valentine, 69.

“It’s going to have an adverse effect on many things,” said the former National Health Service worker, who voted to leave as a rejection of “lawmakers in Brussels telling us what to do”.

“EU nurses who might have considered working here are not applying any more.

“The good people that we could do with in this country are not coming.

Valentine was walking along the riverfront to Tilbury Fort, a moated, star-shaped bastion.

Tilbury is synonymous with resistance to foreign interference.

Facing the 1588 Spanish Armada, queen Elizabeth I rallied her troops at the fort with one of the most famous speeches in English history.

“I voted out. I object to being told what to do by non-elected people,” said Tony Church, 65, who was fishing in the estuary.

“You get the impression they’re more prepared than we are to negotiate. We seem to be dragging our feet.

“I just hope that they don’t just capitulate and give away too much.”

One response to “Get out, and go quick: Brexit heartland stays defiant”