Hill predicts UK will say ‘no’ to Brexit 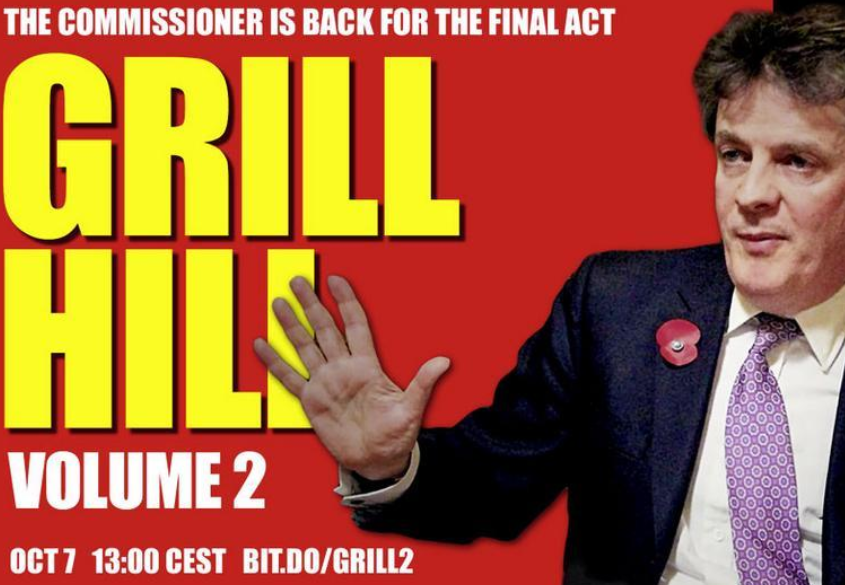 The UK's Jonathan Hill was back for "Grill Hill 2" at the European Parliament today. [Julia Reda/Twitter]

The United Kingdom’s Commissioner-designate Jonathan Hill told MEPs that the British people will vote to stay in the European Union in a future “Brexit” referendum, during his second hearing at the European Parliament today (7 October).

Hill was called back by members of the Parliament’s influential Economic and Monetary Affairs Committee after failing to convince them last week he was the right man to become Commissioner for Financial Stability, Financial Services and Capital Markets Union.

Commission President-elect Jean-Claude Juncker has promised that his new Commissioners would be “more political” than those in the outgoing executive – and Hill’s comments are perhaps evidence of this new strategy.

The Barroso Commission has been criticised for relying on bland platitudes and “no comments” to field questions about potentially controversial issues, such as the UK’s relationship to the EU.

Hill is the only Commissioner to have suffered the second audition, despite other candidates, such as Spain’s Miguel Cañete, facing widespread opposition to their appointment. Cañete, Juncker’s choice for climate and energy boss, was blasted for his links to the oil industry at his hearing but was not called back.

Hill asked MEPs to imagine it was 2019, just before the next European elections. The 2014 European elections saw the Eurosceptic UK Independence Party (UKIP) top the British vote. UK Prime Minister David Cameron has promised a 2017 in/out referendum on the UK’s EU membership if the Conservatives win next year’s general election.

“And our Union, by the way, remains a family of 28 member states – including the United Kingdom,” he added.

Steven Woolfe, a UKIP MEP, clashed repeatedly with Hill at last week’s hearing. Today, “Big Bad Woolfe” as he was nicknamed after his attacks, asked if Hill had become the “Nostradamus of the EU” and was now able to predict the future.

“Given the choice of strong reformed EU close to its citizens, the British people will choose to remain in,” Hill shot back.

Hill said UK voters would realise the alternatives to EU membership were “dreams and fairy tales” like post-Brexit access to the single market on UK terms.

“I said what I said because it was my hope and belief there will be a referendum. Something you say you want, although by your actions back home you make it less likely,” he added.

Hill was referring to Tory fears that UKIP will poach their support and hand victory to Labour in the national elections next year. Labour does not support the Brexit referendum.

He may also have been thinking of the recent defection to UKIP by two Conservative MPs. The defections have sparked two high profile by-elections, the first to be held on Thursday (9 October).Those polls have pilled pressure on Cameron to toughen his stance on the EU.

Kay Swinburne, the European Conservatives and Reformists (ECR) group coordinator in the ECON Committee, told EURACTIV it was important Hill showed his commitment to the EU.

His support for the UK to remain in a reformed EU was consistent with the beliefs of many in her party, she said.

Despite having provided replies to 23 written questions by MEPs since that hearing, Hill did not convince all the MEPs.

Philippe Lamberts, co-chair of the European Greens, said his group would push to have Hill’s candidacy put to a vote.

The vote was delayed at Hill’s last hearing, to allow for the second exchange of views. It is likely to take place tomorrow morning.

“We know that he is not competent for the job. The best I can offer is for him to stay in the Commission [but with a different portfolio],” Lamberts told reporters.

Lamberts conceded that Juncker, a member, like Cañete, of the European People’s Party (EPP), could “steamroller through” his new team. The EPP is the largest group in the European Parliament.

French Liberal Sylvie Goulard told reporters Hill risked paying the price for not being a member of the EPP. “But ask Cameron why he is not part of the EPP,” she added, referring to the Tories’ split from the EPP to form the ECR in 2009.

There are groups in the Parliament willing to be steamrollered, said Lamberts. “The best we can hope for is to change his portfolio,” he added.

Swinburne, a British Conservative, said that any carve-out would likely centre on the Banking Union part of Hill’s portfolio.

Some MEPs are concerned that a member of a non-eurozone country will have responsibility for the EU Banking Union.

While it is open to all EU member states, only eurozone countries are currently part of it, and questions remain over how to ensure both “ins” and “outs” are fairly represented at the European Banking Authority.

If the carve out was to happen, responsibility for financial services regulation was still an influential and important portfolio for the UK to have, Swinburne said.

London is the EU’s leading financial centre. Because Hill is British, some MEPs believe he will act to protect the interests of the City of London rather than the EU as a whole.

Hill denies that, insisting he will put the European interest ahead of the national.

Because Hill has worked for lobbyists in the past and founded his own consultancy, those suspicions run even deeper.

Sven Giegold, a German Green, said, “I listened with care to your fairy tale about 2019 […] I think for children to listen to, it’s very nice.”

Giegold criticised Hill for not giving the names of companies for which he lobbied in his reply to the written questions, saying “It’s a question of trust.”

Hill said he had mentioned a number of companies in his reply and that the company he founded was much more public relations than lobbying.

“The image created of my being in the pocket of financial services is not true,” he said.

A vote on whether to affirm Hill is likely to take place tomorrow morning. MEPs can officially only approve or reject an entire new Commission.

But in practice, candidate Commissioners have been withdrawn or replaced in the past, in order to secure the Parliament’s approval.

Particularly relevant to Jonathan Hill, the UK's choice for Commissioner, is the strained relations between his country and the EU.

UK Prime Minister David Cameron waged a campaign to block EU veteran uncker from becoming the next President of the European Commission.

Juncker was seen as the legitimate candidate for the post because he campaigned during the European elections as the leading figure of the centre-right European People's Party (EPP), which won the largest number of seats in Parliament.

But Cameron refused to support this because Juncker's candidacy did not appear on the ballot papers at the May election.

He insisted that EU heads of states and government took a vote on the matter during an EU summit on 27 June, even though he does not have a blocking minority.

Cameron has promised Britons an in/out referendum on Britain's EU membership if he is re-elected in 2015.

UKIP was the most successful British party in the European elections. The Eurosceptic party is now looking to build on that success, adding to the pressure on Cameron.