The business magnate forecast an even steeper drop than occurred on “Black Wednesday”, which forced Britain to withdraw from the European Exchange Rate Mechanism, in an article in the Guardian newspaper published late Monday (20 June).

“If Britain leaves the EU it will have at least one very clear and immediate effect that will touch every household: the value of the pound would decline precipitously,” the 85-year-old wrote.

He estimated a drop for the currency of at least 15%.

“Then ironically one pound would be worth about one euro – a method of ‘joining the euro’ that nobody in Britain would want,” Soros added.

The pro-Brexit side have accused Remain campaigners of scare tactics by arguing that a vote to leave the EU on Thursday would damage Britain’s economy.

Soros warned that leaving the EU would lower house prices and cause job losses, potentially causing a recession.

One of the world’s richest men according to Forbes magazine, Soros warned that powerful “speculative forces” would be “eager to exploit any miscalculations by the British government or British voters”.

“A vote for Brexit would make some people very rich — but most voters considerably poorer,” Soros wrote.

“A vote to leave could see the week end with a Black Friday, and serious consequences for ordinary people.”

Over the eurozone crisis Soros has advised Germany to accept eurobonds or leave the euro. Berlin hasn’t listened to his advice.

After earlier surveys indicated narrow gains for the Remain camp, global markets rallied and the pound rose to a three-month peak.

But the latest polls published ahead of the 23 June vote suggest the result could go either way.

Soros said yesterday he saw Russia emerging as a global power as the European Union collapses, in much the same way as the EU flourished when the Soviet Union started falling.

Soros added that he felt “more than ever” that the EU’s destiny hinged on Ukraine’s future, speaking in London at an event hosted by the Open Russia, a Russian opposition movement founded by Kremlin critic Mikhail Khodorkovsky. 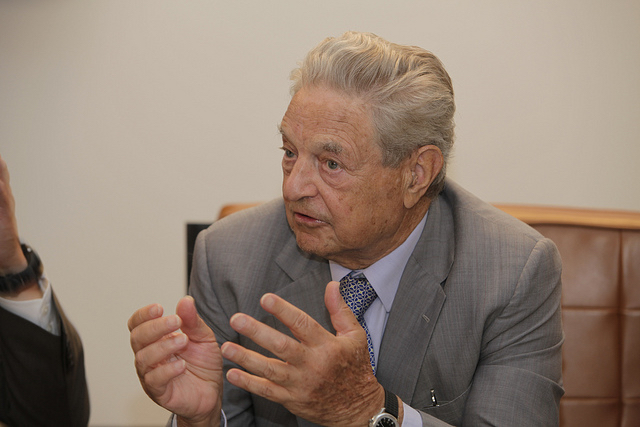 Soros ‘ready to invest’ in Ukraine

George Soros is ready to invest $1 billion in Ukraine if Western countries help private investment there, and sees a 1 in 3 chance of Greece leaving the euro, the billionaire told Austria’s Der Standard.

One response to “In the event of a Brexit, Soros predicts the pound could cost as little as the euro”