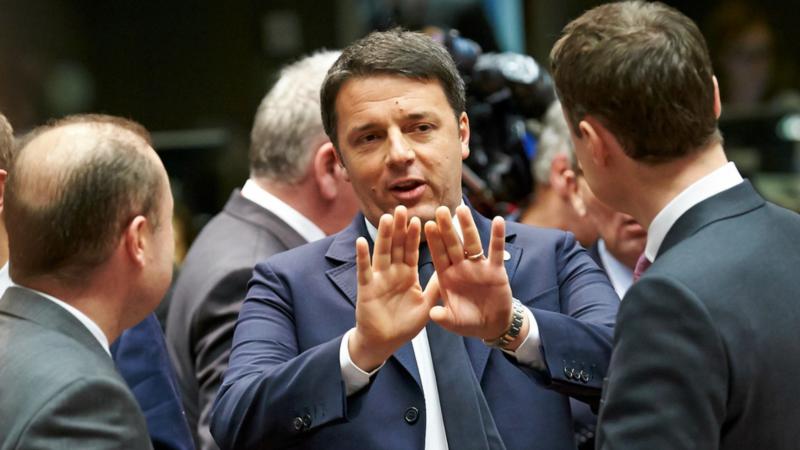 “It is easy to blame Europe for everything – harder to try to build a different Europe that pays more attention to values and less to big finance,” Matteo Renzi said on his Facebook page, explaining why he had called the meeting with French President Francois Hollande and German Chancellor Angela Merkel.

“That is what we are trying to do with all the energy we possess.”

Europe’s economic outlook, jihadist attacks, the refugee and migrant drama, the Syrian conflict, and relations with Russia and Turkey were all on the agenda for the talks later Monday on the island of Ventotene, one of the cradles of the European dream.

The big three are hoping to forge a common position ahead of an informal EU summit in Bratislava that will attempt to plot a way forward for the 27 remaining member states.

“Confronted with problems, one has a choice: find someone to blame or find a solution,” he wrote.

“We are working to solve the problems. And that means we want a post-Brexit Europe, that has been hit in the heart by terrorism, to relaunch an ideal based on unity and peace, freedom and dreams, dialogue and identity.”

It will be the second round of talks between the three leaders. At their first, shortly after Britain’s June 23 vote, the leaders called for “a new impulse” for the EU.

Critics have demanded less talk and more action over a crisis some states fear could lead to similar referendums in other countries, particularly the Netherlands, which opposes changes to the EU to achieve closer integration.

Coming up with a road map acceptable to all will not be easy, with the Czech Republic, Hungary, Poland and Slovakia vowing after Britain’s vote to draw up their own plans for a less centralised EU.

Renzi was to welcome Hollande and Merkel in Naples before travelling to Ventotene, where they will visit the grave of Altiero Spinelli, one of the founding fathers of the ideal of European integration.

Imprisoned on the island by the fascist government during World War II, Spinelli and fellow captive Ernesto Rossi co-wrote the “Ventotene manifesto” calling for a federation of European states.

In another symbolic move, the leaders will hold a working dinner and press conference on Italy’s Garibaldi aircraft carrier, the flagship of the EU’s “Sophia” mission against people trafficking in the Mediterranean.

It will be the start of an intensive tour for Merkel as she attempts to coordinate a response to one of the EU’s biggest crises in decades and quell fears Berlin wants to monopolise the debate.

After a series of deadly attacks by the Islamic State group, the three leaders are also expected to explore greater co-operation on counter-terrorism and an integrated European security and defence policy – a long-cherished objective that could be easier to achieve now sceptical Britain has departed.

In terms of the economy, Hollande wants an EU investment fund for infrastructure, education, research and innovation to be doubled, according to a French diplomatic source.

Renzi is tipped to unveil a proposal to use part of those funds to restore European cultural monuments.

But while Hollande and Renzi want to tackle Europe’s identity crisis through investments, Merkel is unlikely to be moved by their anti-austerity overtures.

And with 2017 bringing a general election in Germany and presidential election in France, they will be wary of ignoring opposition to further European integration at home, leaving them little room for manoeuvre.

Theresa May’s new Brexit team of trade ministers should ignore the former Commonwealth and concentrate on the US and China, according to a new report from a former Bank of England economist.