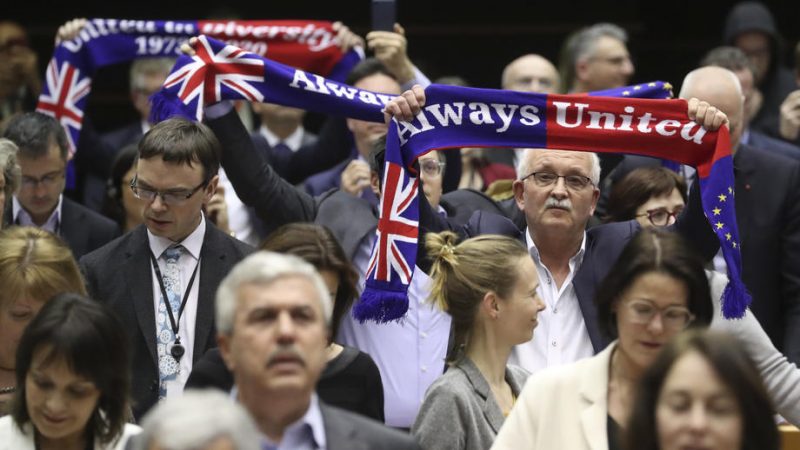 MEPs rubber-stamped the Withdrawal Agreement between the UK and the EU on Wednesday (29 January) after an emotionally charged but largely good-natured debate that concludes the ratification of the Brexit process..

EU lawmakers rubber-stamped the Withdrawal Agreement between the UK and the bloc on Wednesday (29 January) after an emotionally charged but largely good-natured debate that marked the United Kingdom’s final act in the EU assembly.

MEPs endorsed the agreement – which has already received legal assent in the UK – by 621 to 49 with 13 abstentions, after which they linked arms for a tearful rendition of Auld Lang Syne.

The vote in the European Parliament will be followed on Thursday by the Council of Ministers giving their formal approval, the last step before the UK’s departure from the EU at 23:00 GMT on Friday.

“We are deeply saddened that we have come to this moment in time when a member state chooses to leave the European family,” Parliament president David Sassoli told MEPs as he formally signed the Agreement.

“We have a lot more in common than what divides us,” he concluded.

Little of the debate was focused on the substance of the near 700-page Withdrawal Agreement finalised by UK Prime Minister Boris Johnson and EU leaders last autumn, more than three years after Britons voted in June 2016 by a 52-48% margin to leave the EU.

“No new partnership will bring back the benefits of being part of the same union but we have the duty to seek the best for the British and for the European people in a post-Brexit world,” said European Commission President Ursula von der Leyen.

“We will always love you and we will never be far,” she added.

Guy Verhofstadt, the chair of the Parliament’s Brexit Steering Group, said it was “sad to see a country leaving that twice liberated us, has twice given its blood to liberate Europe”.

Like many pro-Remain MEPs, he predicted that the UK would eventually rejoin the EU and concluded that “this vote is not an adieu, this vote, in my opinion, is only an au revoir.”

Brexit party leader Nigel Farage, who fronted the anti-EU campaign for many years, was quick to disagree. He described the UK’s EU membership as a “47-year political experiment that the British people have never been very happy with.”

“What happens at 11 pm marks the point of no return. Once we have left, we will never be coming back,” he said.

Pro-Remain MEPs wore commemorative scarves with the EU motto ‘United in Diversity’, while the mood was much more upbeat in the Brexit camp.

“You are losing a bad tenant and gaining a good neighbour,” said Dan Hannan, a Conservative Brexit campaigner. Hannan argued that the Maastricht Treaty, which began a civil war of sorts within the UK Conservative party, had been a pivotal moment in driving Euroscepticism in the UK.

That prompted triumphal cheering and flag-waving by Brexit party MEPs who then decamped to a bar behind the plenary chamber before returning to vote.

Other MEPs warned that EU leaders should heed the warnings of Brexit and the rise of Eurosceptic and populist parties across Europe. Martin Schirdewan, a German leftist, warned that “the UK may not be the last if the EU does not change its political path”.

Underscoring the historic nature of the event – the UK becoming the first member state to leave the EU – the parliamentary gallery and nearby press room were packed.

Talks on a post-Brexit partnership between the EU and UK are expected to begin in early March with a view to finalising a new deal before the end of 2020, when an eleven-month transition period ends.