Johnson and von der Leyen kick the Brexit can into autumn 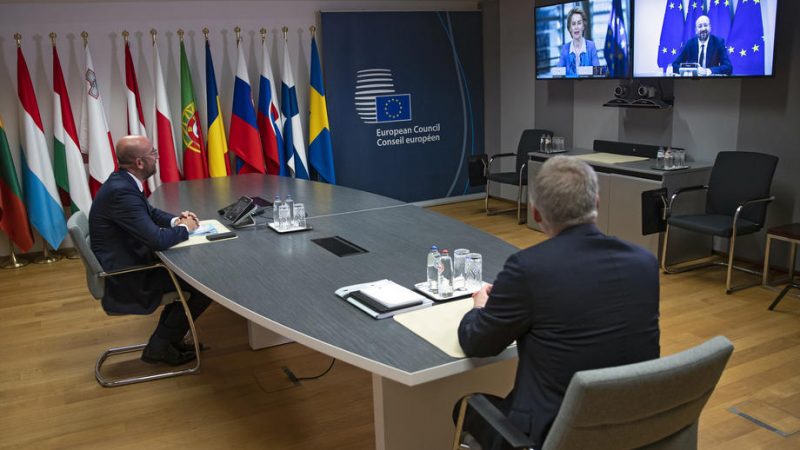 EU-UK trade talks will be stepped up in July with a view to brokering a deal in the autumn, Prime Minister Boris Johnson and European Commission President Ursula von der Leyen agreed on Monday (15 June). EPA-EFE/Francisco Seco / POOL

Trade talks between the European Union and the UK will be stepped up in July with a view to brokering a deal in the autumn, Prime Minister Boris Johnson and European Commission President Ursula von der Leyen agreed on Monday (15 June).

In a joint statement following a video conference, the two sides said the talks had been “constructive” and added that they planned to “intensify the talks in July and create the most conducive conditions for concluding and ratifying a deal before the end of 2020.”

The renewed verbal commitment will also put pressure on the German government, which takes over the EU’s six-month rotating presidency in July, to broker a compromise.

In another expected move, leaders also confirmed that there will be no extension of the transition period, during which the UK remains in the EU Single Market, beyond 31 December.

Back in late January when the UK formalised its legal exit from the bloc and the start of talks on a successor trade pact, the ‘High Level’ June meeting was billed as a decisive moment when the two sides would assess whether they could finalise a post-Brexit trade pact.

In the event, the video call was a damp squib.

Only one round of face-to-face talks was possible before the coronavirus pandemic swept across Europe. Three further week-long rounds between Michel Barnier’s Future Relations Taskforce and UK officials led by Frost have made little progress on fisheries and the so-called ‘level playing field’ binding the UK to EU regulation and state aid rules.

Meanwhile, longstanding red-lines on governance issues such as the role of the European Court of Justice and dispute resolution remain unchanged.

Following the latest week-long round on 5 June, Barnier told reporters that there had been “no significant areas of progress” in the talks.

The slow pace is likely to ensure that only a minimalist trade deal will be finalised before the end of 2020. Talks on future co-operation on foreign policy, defence and security and development, all areas which the UK had initially said it wanted to include, have not yet started at all.

However, there is no guarantee that any deal will be reached this year. EU Trade Commissioner Phil Hogan and other EU officials have accused the UK of threatening to deliberately run down the clock on talks and preparing to blame a ‘no deal’ scenario on EU intransigence and the pandemic.

The revised timeline means that September and October are set to mark the crunch-time. Barnier has indicated that October is the latest that a new deal can be agreed in order to allow time for ratification by the European Parliament.

Face-to-face talks, which have been impossible since mid-March because of the coronavirus pandemic, are also expected to become the norm from late June onwards.

In the meantime, lawmakers on both sides of the Channel have stepped up their rhetoric.

On Wednesday and Thursday, MEPs are expected to adopt a resolution giving strong support to Barnier’s tough negotiating stance, while Johnson and his ministers say they are prepared to revert to trading with the EU on World Trade Organisation terms if the Commission refuses to budge.