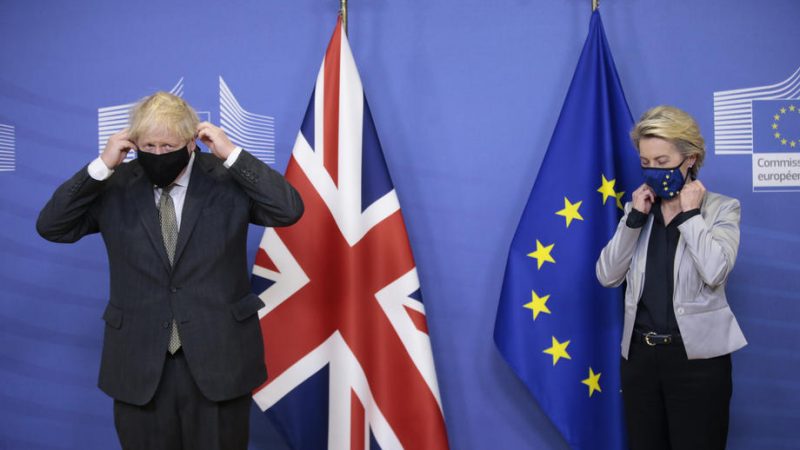 Boris Johnson and Ursula von der Leyen have set a Sunday (13 December) deadline for a “firm decision” on whether an EU-UK trade deal can be obtained but the UK appears to be heading towards a ‘no deal’ Brexit after crisis talks on Wednesday.

Three hours of talks over a fish dinner on Wednesday evening between the UK Prime Minister and European Commission chief and their negotiators David Frost and Michel Barnier, do not appear to have broken the deadlock between the two sides.

“Very large gaps remain between the two sides and it is still unclear whether these can be bridged,” a senior No 10 source said following the dinner, adding that the leaders had a “frank discussion about the significant obstacles which remain in the negotiations”.

The source said there would be discussions over the next few days between UK and EU negotiating teams and the British Prime Minister “does not want to leave any route to a possible deal untested”.

“We gained a clear understanding of each other’s positions. They remain far apart,” said von der Leyen in a statement.

“We agreed that the teams should immediately reconvene to try to resolve these essential issues,” the Commission President added.

The two leaders had agreed that “a firm decision should be taken about the future of the talks” by Sunday.

However, with the UK apparently unwilling to compromise any further, several EU leaders have warned their domestic lawmakers to prepare for a no deal scenario. With the two sides now close to agreement on fishing rights and state aid, the key dividing line appears to relate to the so-called ‘level playing field’, with the EU seeking a clause to ensure that if one side changes its regulatory standards, the other is not able to enjoy a competitive advantage.

The UK insists that it will not be bound to EU regulatory standards in perpetuity.

“Our friends in the EU are currently insisting that if they pass a new law in future with which we in this country do not comply or don’t follow suit, then they want the automatic right to punish us and to retaliate,” Johnson told UK lawmakers in the House of Commons on Wednesday afternoon.

“I don’t believe that those are terms that any prime minister of this country should accept,” he added.

Although the opposition Labour party is urging Johnson to agree a deal “in the national interest”, the Prime Minister is unlikely to face much resistance from his Conservative party, which boasts an 80-seat parliamentary majority, should he abandon talks on an EU trade pact and opt to trade with the bloc on World Trade Organisation terms from 1 January.

“We are on the precipice of a no-deal [Brexit],” Ireland’s Taoiseach, Micheál Martin, told the Irish parliament on Wednesday.

For her part, German Chancellor Angela Merkel told the Bundestag on Wednesday that any agreement would have to respect the integrity of the single market and that “if there are conditions coming from the British side which we cannot accept, then we will go on our own way without an exit agreement”.

The state of the talks and the EU’s ‘no deal’ preparations are now likely to be prominent on the agenda facing EU leaders when they gather in Brussels on Thursday for their final summit of the year.