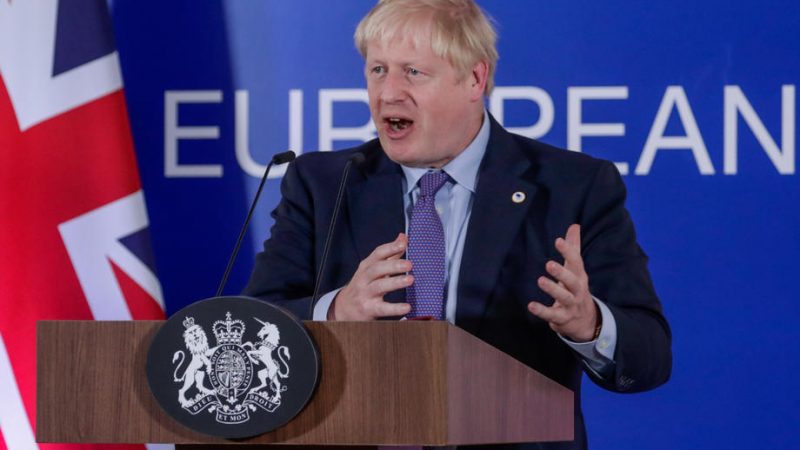 Boris Johnson got his Brexit deal. Now he has to sell it at home.

After all the predictions of a summit running into the weekend because of a diplomatic showdown, leaders signed off on the Brexit agreement announced within an hour of the summit starting.

Johnson’s deal is based around a new protocol on Northern Ireland under which the province will remain aligned to single market rules on goods, with UK authorities in charge of applying the EU’s customs code.

The arrangement will last until 2025, when the Northern Ireland assembly will vote, with a simple majority required, on whether or not to retain the EU rules.

That, it appears, was the easy part. Now attention shifts to Westminster for a showdown debate that will start at 9:30 GMT on Saturday and end with a vote on the deal later that evening.

The UK Prime Minister will attempt to portray the vote as a case of ‘his deal vs no deal’. But it is far from clear that he will match his triumph in Brussels when the House of Commons debates and votes on the text on Saturday. Most calculations put the government a handful of votes short.

Northern Ireland’s Democratic Unionist Party have stated that their ten MP will all oppose the deal, leaving Johnson in need of all 21 Conservative lawmakers who were expelled from the party in September for supporting a law to prevent a no-deal Brexit, as well as close to 20 Labour MPs.

Labour leader Jeremy Corbyn has hinted that MPs who vote with Johnson will themselves be kicked out of the party.

Supporters of a second referendum have signalled that they will not attempt to obtain a majority for a new poll on Saturday. Instead, their first priority will be to reject Johnson’s deal.

Meanwhile, the Scottish National Party has tabled an amendment demanding an extension to the end of January for the purposes of calling a general election.

For the moment, the question of whether a request for a further three-month extension will have to be made by Johnson is off the table.

“We have a deal and this deal means that there is no need for any further prolongation,” European Commission chief Jean-Claude Juncker said at a joint press point with Johnson, before telling reporters more unequivocally a bit later that there would not be an extension.

Though helpful to Johnson, those remarks irritated a number of EU officials who played down their significance, saying it was not for Juncker to decide on an extension, and suggested that member states would grant it if UK lawmakers reject the deal.

“If there is a request for an extension, I will contact member states to see how to react,” said Tusk.

EU diplomats are also keenly aware that the odds of the deal passing in Westminster are still against Johnson.

But a mixture of relief tinged with regret was the prevailing mood of EU leaders.

“What I feel today is sadness. Because in my heart. I will always be a Remainer. I hope Britain returns one day. Our door is open,” said Tusk.

“I really regret the UK is leaving the EU but I fully respect their decision,” added Varadkar.

The ebullience came, unsurprisingly, from Johnson who declared himself delighted with a “very productive day for the UK”, and added that he was “very confident” of getting support from MPs for the deal.

“The extraction having been done, the building now begins,” he said, referring to the need to start developing “a new and progressive partnership” with the EU.

But he needs to square Westminster first.

One response to “Johnson gets his deal and plaudits, now eyes shift to Westminster”