The UK and European Union are expected on Thursday (24 December) to agree a new trade and security deal just a week before the end of the post-Brexit transition period. EPA-EFE/ANDY RAIN

Prime Minister Boris Johnson is expected to announce the pact on Christmas Eve in a press conference and will present the deal as a hard-won triumph, following days of news reports about a blockade of goods trucks outside Dover, the UK’s main port, itself a symbol of the way in which the UK is now disconnected politically and economically from the EU.

The ‘white smoke’ appears to have emerged following several days of intense talks between Johnson and European Commission President Ursula von der Leyen less than a week after both sides briefed that a ‘no deal’ scenario, with EU-UK trade reverting to World Trade Organisation terms was the most likely outcome. 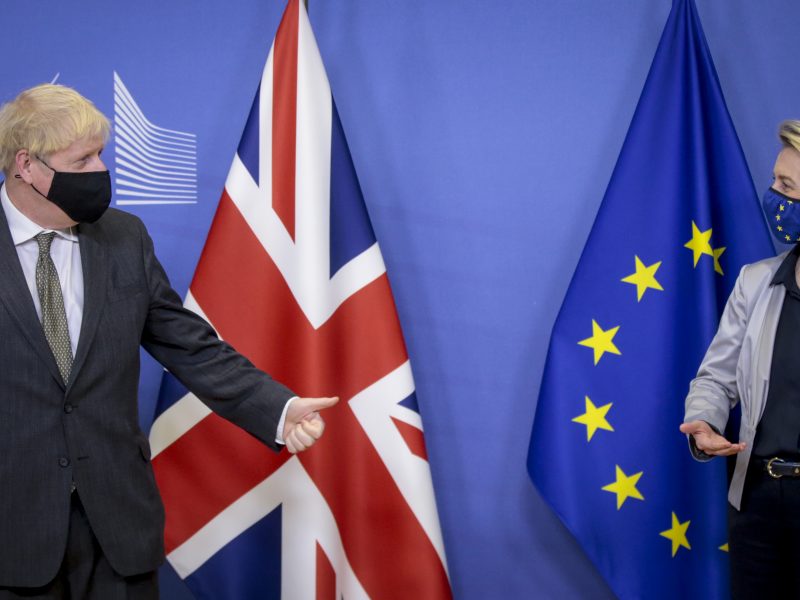 Haggling over fishing stocks worth an estimated €70 million was the final hurdle. Getting a deal over the line is thought to involve a compromise under which the UK will take back 25% of the EU’s fishing quota – with changes phased in over five-and-a-half years.

UK government officials have defended the concession, which is a marked climbdown from previous UK demands, arguing that UK vessels will be catching two-thirds of the fish in its waters by 2026.

Meanwhile, on evolution clause designed to avoid either side gaining a competitive advantage by failing to upgrade environmental, social and labour standards

The suggestion, played up by some European officials, that the fisheries agreement is closer to the EU’s position, on one of the most symbolic and divisive issues since the start of the talks, is likely to disappoint some in Johnson’s Conservative party.

On Wednesday, the European Research Group of hard Brexit-supporting Conservative MPs would immediately reconvene a “panel of legal experts, chaired by Sir Bill Cash, to examine the details and legal text”.

The team would seek “to ensure that its provisions genuinely protect the sovereignty of the UK, after we exit the transition period at the end of this year,” the ERG leadership stated.

Although the deal is set to include some measures on continued police and judicial co-operation, its primary achievement is in ensure zero-tariff and zero-quota goods trade. Equivalency on financial services, the UK’s most lucrative single market sector, is not part of the deal, nor are most service sectors. The question of whether the European Commission will give an ‘adequacy agreement’ to the UK to enable cross-border data flows to continue is also outstanding.

However, the deal will minimise the disruption for businesses and travellers on both sides of the Channel and limit economic damage against the backdrop of economies which have been battered by the COVID-19 pandemic.

Despite the concessions on fisheries and the level-playing field, Johnson will be able to obtain a comfortable parliamentary majority even if there is a rebellion from some Conservative lawmakers.

The late conclusion of the draft agreement means that parliamentary ratification before the end of the year is impossible and, instead, both sides are set to agree on “provisional application” of the deal on 1 January.

The House of Commons is still likely to return for an emergency session next week while the European Parliament will scrutinise and vote on the text in January. The agreement will also be subject to national ratification in each of the 27 EU countries. French Europe minister Clément Beaune has insisted that his government could still veto the pact if it is a bad deal, a line also taken by the Wallonian parliament in Belgium, which came close to nixing the EU’s trade pact with Canada in 2016.