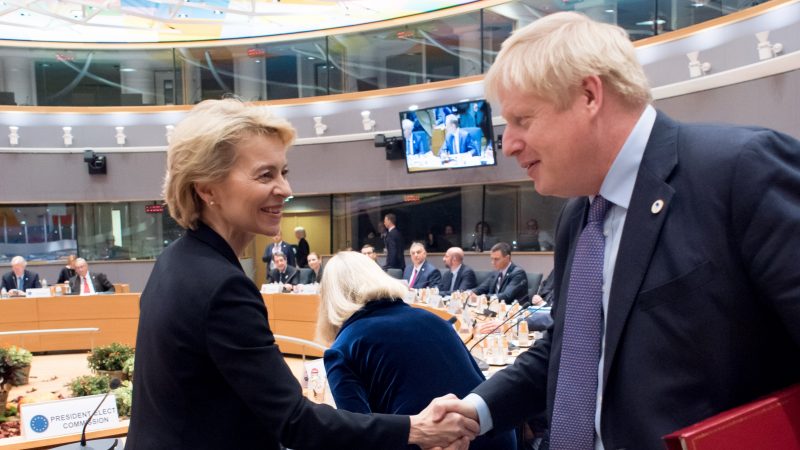 Prime Minister Boris Johnson was on Wednesday (8 January) expected to tell Ursula von der Leyen that Britain will not extend the Brexit transition period, in their first face-to-face meeting since she became European Commission chief.

Downing Street said Johnson will call for the EU and Britain to work out “a confident and positive future relationship” by the end of December, when the implementation period — designed to cushion the effects of Brexit — is due to end.

“Having waited for over three years to get Brexit done, both British and EU citizens rightly expect negotiations on an ambitious free trade agreement to conclude on time,” his office said.

“There will be no extension to the Implementation Period, which will end in December 2020.”

Lawmakers on Tuesday began three days of debate to enshrine Johnson’s Brexit divorce deal into law, with few hurdles to its passing expected after he won a comfortable majority at last month’s elections.

Both the UK and European parliaments must ratify the deal before Britain’s 31 January departure date, when the so-called implementation phase will kick in.

Until then, talks cannot formally begin on the future relationship, although both sides are keen to lay the groundwork.

If no agreement is reached by the end of the year, Britain and the European Union will then trade under World Trade Organisation rules, creating a raft of new tariffs.

Johnson will also say that the upcoming talks should be based on Britain seeking a standard free-trade deal, similar to the one between the EU and Canada, rather than accepting alignment with EU rules in return for full market access, as Norway does.

Many opposition MPs believe Johnson cannot negotiate a new trade deal with Brussels in 11 months, and are seeking to amend the Withdrawal Agreement Bill to allow for more time.

But they are almost certain to fail, given Johnson’s comfortable majority.