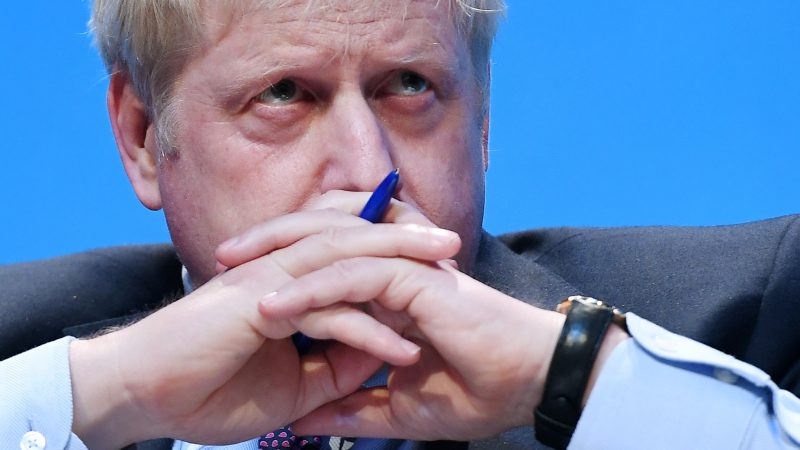 Police were alerted early on Friday after a neighbour heard a loud altercation involving screams, shouts and bangs at the south London property, shortly after Johnson had secured his place in the final run-off to become prime minister.

The Guardian reported that Johnson’s partner Carrie Symonds could be heard telling the former London mayor to “get off me” and “get out of my flat”.

Johnson refused to answer questions about the incident on the first day of the month-long contest to win over Conservative grassroot members, saying “I don’t think people want to hear about that kind of thing.”

He instead tried to focus on his policies, saying “we need to get Brexit done” and promising to prepare Britain for a no deal exit from the EU, if a deal cannot be reached.

Tory grandee Malcolm Rifkind criticised the response, saying “the fact is there was a police visit. You don’t just say ‘no comment’. “That implies you may have something you don’t want to disclose,” he told BBC Radio 5.

Former Tory foreign office minister Alan Duncan told the Guardian his former boss now had a “big question mark over his head”, adding Johnson had shown a “lack of discipline” throughout his career.

Polls conducted for the Mail on Sunday newspaper before and after front page reports of the argument showed that Johnson’s lead over rival Jeremy Hunt, the foreign minister, had evaporated amongst all voters and had narrowed among Conservatives.

Polling for the Mail on Sunday newspaper showed Johnson was seen as the best prime minister by 36% of all voters on Thursday, while Jeremy Hunt was supported by 28%.

But Johnson had lost the lead on Saturday, with 32% supporting Hunt and 29% Johnson.

Among Conservative voters, Johnson’s lead fell from 55% to 45%, while Hunt’s standing rose from 28% to 34%, the polls conducted by Survation showed.

But it is the party’s 160,000 members who will have the final say, and their support appeared undimmed during the first day of “hustings” – internal party debates to decide the new leader – in Birmingham, central England, on Saturday.

“Stuff happens at home all the time… someone spills the wine, we can’t really be making headlines out of that,” supporter Hasnain Ahmed, 23, told AFP. “What’s important is what’s this guy going to be delivering for you in Brexit.”

Hunt also received a warm reception, promising that if he couldn’t strike a Brexit deal with the EU, “then I will leave without a deal”.

“I was probably leaning towards Boris but I was very impressed with what Jeremy Hunt said today,” Tory councillor Karen Shakespeare, told AFP. “He surprised me with his directness and honesty so I have to say I am now leaning very heavily towards Jeremy Hunt.”

'Many are now questioning whether he has the right temperament and the right character.' @ranvir01 discusses whether Boris Johnson's turbulent love life will affect his chances of becoming Tory leader. #GMB pic.twitter.com/QOUgMvFyzN

Johnson, who has a leading Brexit campaigner in the 2016 referendum, on Saturday reiterated his desire to leave the European Union in October with or without a deal.

Hunt, who backed Remain in the referendum, said he would take the country out of the EU without a deal on Oct. 31 if the EU had not showed it was willing to renegotiate the Brexit deal.

Johnson also came under scrutiny on Sunday for his relationship with Steve Bannon, the controversial former adviser to US President Donald Trump.

The pair got to know each other professionally when both were in office, and were reported to have met again in an unofficial capacity last summer.

Johnson said at the time that “the so-called relationship” with Bannon was a “lefty delusion” and his office dismissed the latest claims of a working relationship as “totally preposterous to the point of a conspiracy”.

Johnson says his association with Steve Bannon is a "lefty delusion". Yet today's revelation from @carolecadwalla debunks his disingenuous twaddle. It's a familiar theme with Johnson: no honour, utterly untrustworthy and entirely unfit to run our country.https://t.co/lD2e3cCNES