Juncker: ‘Miracles’ needed to unlock next Brexit stage in October 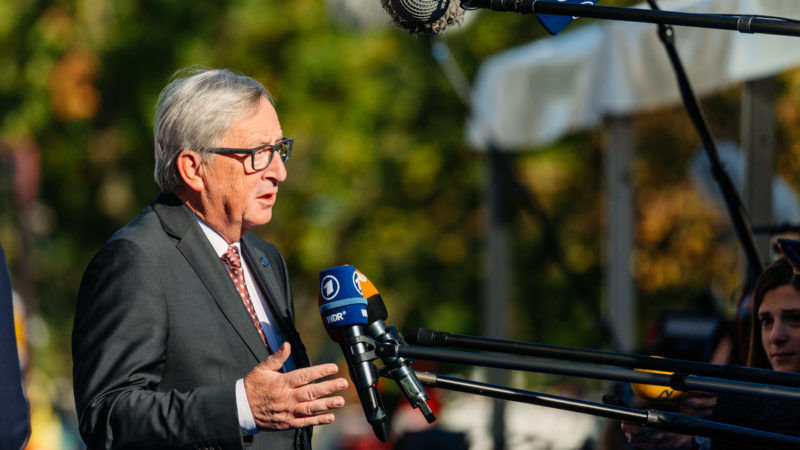 Juncker speaks to the press in Tallinn. [Council]

EU leaders are set to decide at a summit on 19-20 October whether there has been “sufficient progress” on the divorce to start discussing the future relationship including a trade deal, as Britain has demanded.

But British Prime Minister Theresa May insisted there had been “very good progress” on the rights of EU expatriates, following a major Brexit speech she gave in Florence, Italy, last week.

“In my Florence speech I set out very clearly how we could ensure that the rights of those EU citizens were guaranteed in the UK,” May told reporters.

“That has been part of the negotiations that we’ve had, very good progress has been made, that was made clear by the statements made by David Davis and Michel Barnier made yesterday,” she said.

EU negotiator Barnier and his British counterpart Davis wrapped up a fourth round of Brexit negotiations in Brussels on Thursday saying there had been progress following May’s speech, but with Barnier saying it could take “months” to move to trade discussions.

The EU has insisted on progress in three key divorce issues: Britain’s exit bill, the fate of Northern Ireland, and the rights of three million EU citizens living in Britain and a million Britons living in Europe.

Irish Prime Minister Leo Varadkar said there was a “better vibe and a better mood” coming from the talks, but cautioned they were “not at the point where we can get onto the future relationship”.

"Miracles" Juncker will address MEPs on Tuesday in Strasbourg & give them update on Brexit. https://t.co/vRrqRkXzdg