Juncker would like UK to rejoin EU after Brexit 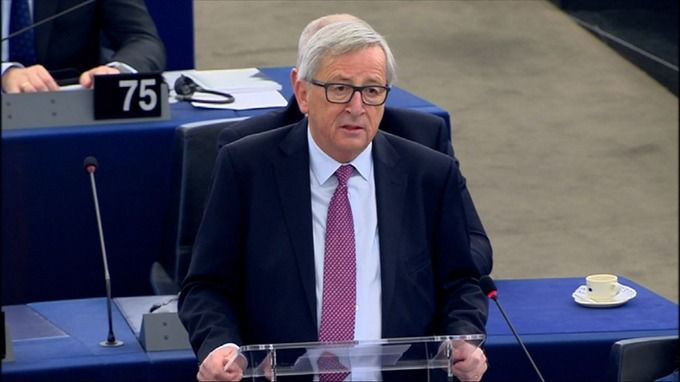 Commission boss Jean-Claude Juncker renewed an offer to Britain on Wednesday (17 January) to stay in the European Union and said he hoped that even if it goes through with Brexit it would apply to rejoin the bloc.

Speaking to the European Parliament, where he had endorsed a statement on Tuesday by European Council President Donald Tusk that Britain would be welcome to remain, Juncker said he accepted a share of responsibility for the British referendum vote in 2016 to leave the Union.

Unless there is a change of heart among our British friends, #Brexit will become a reality – with all its negative consequences – March next year. We, here on the continent, haven’t had a change of heart. Our hearts are still open for you.

“I still feel the exit of Britain is a catastrophe, yes, a defeat we all have to take responsibility for,” he said, responding to a written question from a German lawmaker who had asked if Juncker felt responsible for Brexit.

Jean-Claude Juncker offers a new twist in his campaign to keep Britain in the EU https://t.co/ntpAccUvMS pic.twitter.com/cE8XzYrvOD

“But the reasons for the British exit lie deeper. As Prime Minister (Theresa) May has said, the British never felt at ease in the EU and for 40 years they haven’t been given the chance to feel more at ease. That is why the blame is on many.”

“But I noticed that in London, they have reacted almost upset at this reaction. Be it as it may, once the British have left under Article 50 there is still Article 49 which allows a return to membership and I would like that. I would like us now to treat each other with respect and not abandon each other.”

There has been a surge in debate this month in Britain on whether there should be a second vote to endorse the terms on which Britain leaves. However, May’s spokesman said on Tuesday that there was no question of not following through in March next year on the referendum vote of June 2016 to leave the EU.

Constitutional lawyers are divided on whether Britain can withdraw its two-year notice to quit but the exchanges underline a view in Brussels that an EU political consensus could be found to avert Brexit – even if most are now resigned to Britain leaving and believe the Union will weather the disruption.

Among those who have spoken of a willingness to help Britain stay or to rejoin have been French President Emmanuel Macron. Asked about the current debate, one of his advisers said on Wednesday that France would still welcome a change of heart.

“If tomorrow, or the day after, the United Kingdom decided to change its mind, it’s clear that we would look at this with kindness,” the advisor said. “But it’s not up to us to say if the UK wants to change its mind.”