Juncker warns May not to ‘go over Michel Barnier’s head’ 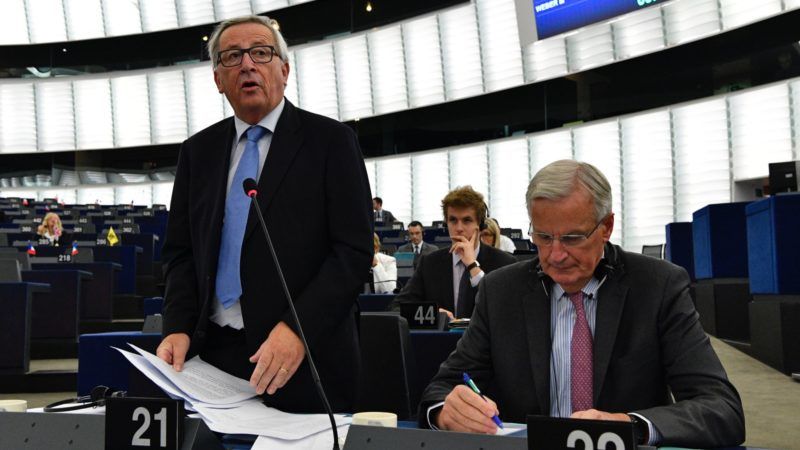 UK media quoted sources close to 10 Downing Street who reportedly said May was going to bypass EU Brexit negotiator Barnier, who has been referred to as “more like a schoolyard bully than an international diplomat”.

Bye-bye Barnier! Theresa May to IGNORE ‘French bully’ and do Brexit deal with Merkel https://t.co/sLyivpvK7w

Speaking to the European Parliament today (3 October) in a debate on the ongoing Brexit talks, Juncker made it plain that: “For those that think that the UK should just “go over Michel Barnier’s head”, I remind them that the Commission has been appointed by the 27 member states and my choice of Michel Barnier had been welcomed by them.

“He acts on their behalf on the basis of clear negotiating mandates.”

He added that Barnier will report to EU leaders at the next European Council on 19-20 October.

“Until now I cannot say that we are ready to enter the second phase of the negotiations,” Juncker stressed.

EU leaders are to decide at the October summit whether enough has been agreed on the divorce to start discussing the future relationship including a trade deal, as Britain has demanded.

But the European Parliament, which will have a final veto on any deal for Britain’s departure from the bloc in March 2019, passed a resolution calling on EU leaders to postpone the decision.

“We first need to agree on the terms of the divorce and then we see if we can half-lovingly find each other again,” Juncker told Parliament.

The move comes despite a speech by May in Florence last month offering concessions, which Barnier told MEPs had been “translated into negotiating positions” by her team, led by Brexit minister David Davis.

Juncker said May’s speech was “conciliatory” but added that speeches were not negotiating positions.

In the field of citizen rights he said progress has been made, but the indispensable role of the European Court of Justice in guaranteeing those rights still needed to be agreed.

“The devil will be, as always, in the detail. But the taxpayers of the EU27 should not pay for the British decision,” Juncker warned.

.@JunckerEU on #Brexit: The devil will be, as always, in the detail. But the taxpayers of the EU27 should not pay for the British decision. pic.twitter.com/BEnLSMHZuE

On the Irish border question, he said it was only possible to talk of solutions that fully respect EU law and the Good Friday Agreement.

Barnier took the floor after Juncker and basically repeated the same messages.

The MEPs’ resolution, backed by all the major political groups, is harsh on Britain’s refusal so far to settle the Brexit bill, saying that the “absence of any clear proposals has seriously impeded the negotiations”.

It says they are “of the opinion that in the fourth round of negotiations sufficient progress has not yet been made” in the three key areas.

It also “calls on the European Council (of national leaders), unless there is a major breakthrough in line with this resolution in all three areas during the fifth negotiation round, to decide at its October meeting to postpone its assessment on whether sufficient progress has been made.”

The Brexit debate allowed top MEPs to take aim at May and her divided cabinet, particularly Davis and Foreign Secretary Boris Johnson.

“Who should I call in London – Theresa May, Boris Johnson or David Davis?” said Manfred Weber, the head of the Parliament’s biggest group, the centre-right European People’s Party.

Instead of putting citizens’ interests first, the UK government is putting Party interests above all. My plenary speech in #Brexit debate. pic.twitter.com/0ubg6btNOf

Manfred even urged May to “sack Boris Johnson”, who has undermined May on a series of key Brexit issues and is due to speak at the Conservative party conference in Manchester on Tuesday.

British Eurosceptic figure Nigel Farage – who still holds a seat in the European Parliament – meanwhile said May was a “waste of space” and should resign.

The fifth round of Brexit talks is due to start in Brussels on Monday.