Lithuanians vow to stick by Farage and EFD 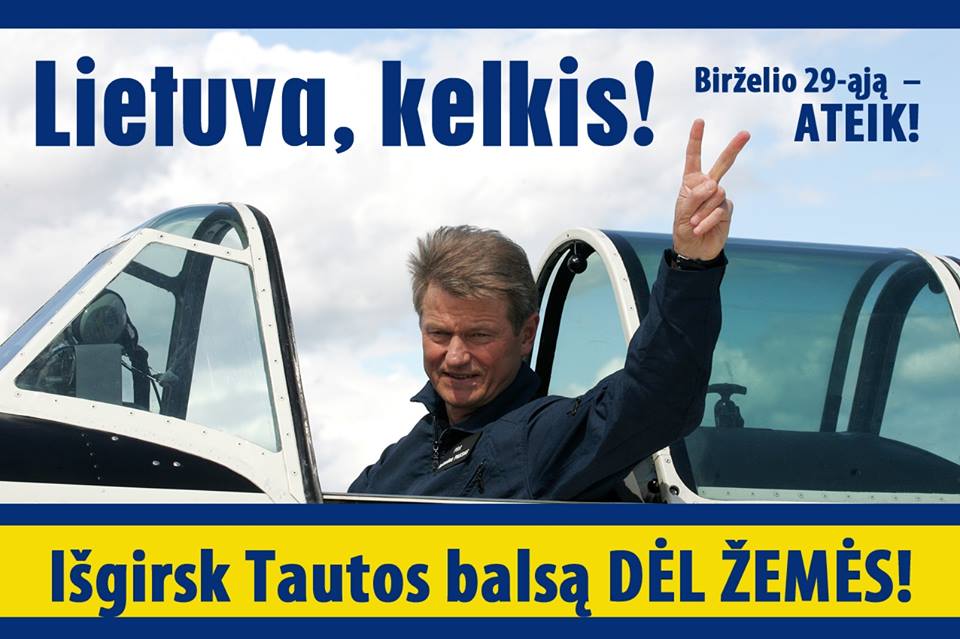 Stunt pilot and ex Lithuanian President Rolandas Paksas wrote to Farage to say he was staying with the EFD. [Paksas campaign poster/Facebook]

The leader of Lithuania’s Order and Justice Party has written to Nigel Farage, denying he will leave the Europe of Freedom and Democracy (EFD) group to join Marine Le Pen’s alliance of far right parties in the new European Parliament.

Rolandas Paksas, an EFD vice-president, wrote, “Dear Nigel, if it were necessary, I would like to confirm my intention to continue sitting in the EFD group, with all the other information being only speculations and spin.”

The email, seen by EURACTIV, was sent after reports on Tuesday night that the party’s two MEPs were joining the Le Pen faction (here). They would have followed Italy’s Lega Nord in defecting to the putative group, led by France’s National Front.

Paksas, an MEP since 2009, is a two-time Prime Minister of Lithuania, Mayor of Vilnius, and was President of Lithuania from 2003 to 2004. The stunt pilot became the first European head to state to be impeached in 2004 after it emerged he had granted citizenship to a major campaign donor.

A parliamentary group, which brings EU funding and other advantages such as influential committee posts for its members, must have at least 25 MEPs from seven different member states. Both the UKIP-led EFD and the far right parties are in negotiations with the pool of unattached parties and independent MEPs as they try to form their respective groups. Any alliance between the two has been ruled out by Farage.

The KNP is not affiliated to the EFD. With its support Le Pen would need just one more MEP from another member state to form a group, which would qualify for EU funding of about €22 million, excluding MEP salaries and expenses (see here).

As things stand, the EFD is the smallest group in the Parliament. The Finns Party and Danish People’s Party have left for the European Conservatives and Reformists (ECR) group (here).

It was announced today (12 June) that the Eurosceptic Alternativ ?für Deutschland would join the ECR, further reducing the pool of potential allies for Farage’s new group (here).?

Welcome to the @AfD_Bund party which has joined the ECR Group this morning.

While UKIP’s 24 MEPs mean they are guaranteed to get the minimum seats, they only have three national delegations; Lithuania’s Order and Justice, the Netherlands’ Reformed Political Party (SGP) and UKIP itself.

One of those, Dutch MEP Bas Belder of SGP, is rumoured to be joining the ECR. The EFD has denied those reports.

Spokesman Hermann Kelly said, “We can confirm that both the Lithuanian and Dutch delegations of the EFD Group are very happy here. They are not only staying but are actively recruiting other delegations for the EFD Group.”

Central to the ambitions and future influence of the EFD will be the support of Beppe Grillo’s Five Star Movement. Without their 17 MEPs, they face less funding and clout in the new parliament, as well as a scrabble for small delegations (here).

#ECR and #EFD and Non attached are on the ballot paper for Beppe Grillo's 5 Star movement. Online votes until 7pm pic.twitter.com/X2HHUlvOpA

Kelly said, “Our group formation is going very well this week. We are very confident of having the required signatures next week and those who don’t want to have a moderate Eurosceptic group in the European Parliament will be in for a big surprise.”

The Czech Party of Free Citizens’ single MEP, and the two MEPs of the Sweden Democrats, have been linked to the EFD. UKIP sources have said the Swedes are less likely to join.

There has also been speculation on social media that the ECR’s Independent Greeks could switch. But that would mean leaving what seems likely to be the third largest force in the Parliament (here).

One option would be to approach Germany’s Die Partei. The party was founded by Martin Sonneborn, a satirist, and won one seat.

Sonneborn has announced that all candidates from their list, starting with him, would take the seat for one month, then retire and thus get the most money out of the European Union.

He also said Die Partei was “not the craziest party in the European Parliament.”

The centrist liberal groups could got 59 seats, Green parties 52 and the right-wing Conservatives and Reformist group, 46.

The big question mark relates to the 41 non-attached MEPs and the 60 “other” MEPs who do not yet belong to any political grouping. Most of those belong to populist and extremist parties hostile to European integration.