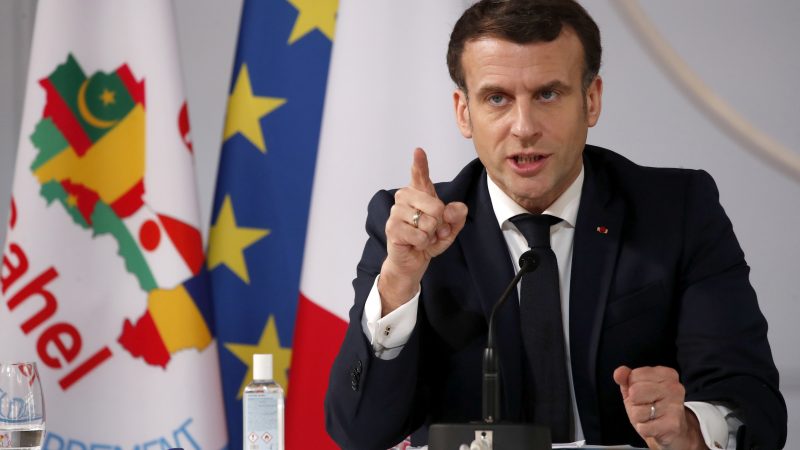 epa09016054 French President Emmanuel Macron delivers his speech after a meeting via video-conference with leaders of the G5 Sahel, in Paris, France, 16 February 2021. French President Macron urged West African leaders to step up efforts in the fight against Islamic extremists in the Sahel region both on the military and political fronts, with support from the international community. Macron joined by video from Paris a summit organized in Nâ??Djamena, Chad with the leaders of Mali, Burkina Faso, Chad, Niger and Mauritania. EPA-EFE/FRANCOIS MORI / POOL MAXPPP OUT

French President Emmanuel Macron sought to portray a united European front at the G7 summit on Friday (11 June), tweeting a picture of the five EU leaders together, in a thinly veiled warning to the UK that the EU is united about the implementation of the Brexit agreement.

Macron earlier described the Northern Ireland Protocol, on which the EU and UK have been at loggerheads for several months, as “non-negotiable”.

Meanwhile, Irish Taoiseach Micheal Martin urged the two sides to agree a compromise, stating that “it is in the capacity of both the UK government and the European Union to arrive at an agreement here.”

As expected, talks in London earlier this week between European Commission Vice President Maros Šefčovič and the UK’s Brexit minister Lord Frost, aimed at resolving disagreements on the implementation of the Northern Ireland protocol, broke up without agreement.

Šefčovič said on Thursday he was “positive we can find a solution” but added: “Our patience really is wearing very, very thin, and therefore we have to assess all options we have at our disposal.”

UK officials are anxious that the grace period on customs checks on chilled meats ends this month, and that no resolution could lead to shops in Northern Ireland not being able to receive such products.

Officials involved in the talks conceded that the discussions on Northern Ireland were ‘honest and direct’ but insisted that both sides would continue to work together and exchange proposals.

However, while political leaders on both sides have used increasingly belligerent language, UK diplomats have played down the scale of bad blood between the two sides and say that Sefcovic had welcomed new proposals from the UK.

In addition to chilled meats, the question of how to avoid disruption to critical supplies such as medicines is also unresolved and has an end June deadline.

The UK also expressed frustration that despite an agreement in principle on the UK accessing the EU’s Horizon, Euratom and Copernicus programmes, the European Commission appears to be dragging its feet.

“There is an urgent need for further discussions in order to make real progress,” David Frost said following the talks and the first meeting of the EU UK partnership council on Wednesday.

While the UK has rejected an EU proposal that it align its phytosanitary and veterinary standards with the EU, it has submitted a proposal that recognises the high standards on both sides and would establish mechanisms to identify and address any risk arising from changes made on either side.

London has also tabled a proposal to reduce and remove burdens for trusted agri-food traders moving goods for use or consumption in Northern Ireland.

UK officials have played down the prospect of the talks collapsing, and say Šefčovič is sensitive to the political difficulties and impacts being felt in Northern Ireland as a result of the protocol, though “these need to turn into solutions”, said on official.

However, despite some positive words from the officials involved in the technical talks, political leaders on both sides say that they are keeping all options open.

Charles Michel, the president of the European Council, on Thursday, warned that the EU would use “all the tools” at its disposal if the UK unilaterally extended a grace period in the Protocol that allows Northern Irish shops to sell British chilled meats.

Those could include tariffs and the suspension of parts of the trade deal with the UK.